Politicians and diplomats, including Vice President Kamala Harris, paid their respects to Queen Elizabeth II at a memorial service in Washington, D.C. 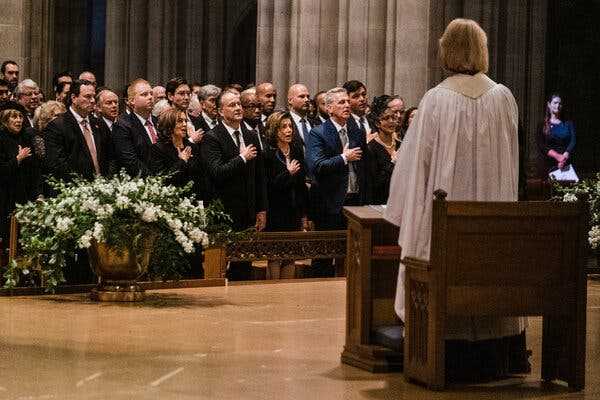 WASHINGTON — They were elected or appointed. The person they were bidding farewell to was born into royalty.

In Washington on Wednesday, American lawmakers and officials paid tribute to a very different kind of leader, whose seven-decade reign began before some of the highest-ranking among them were born.

Prominent figures filtered into the pews of Washington’s National Cathedral to commemorate the life of Queen Elizabeth II, paying respects to the former world leader in the capital of a former British colony.

Vice President Kamala Harris, Speaker Nancy Pelosi and Representative Kevin McCarthy, Republican of California and the minority leader, sat together in the front row, their right hands over their hearts as church leaders in white robes walked down the nave.

Flower wreaths from the House of Representatives and Senate adorned the entrance to the nave, where diplomats, United Kingdom embassy staff and American dignitaries entered.

“She seemed to embody the whole nation and its whole history,” said Karen Pierce, the British ambassador to the United States, during a speech that recalled the queen’s appreciation for American culture through her fishing trips and attendance at football and baseball games. “She well understood the affinity between the U.S. and the U.K., stressing not just common heritage and kinship, but common values.”

Solemn organ music and hymns reached the pointed-arch ceilings as hundreds commemorated the life of the queen two days after she was laid to rest at an elaborate and majestic funeral in London.

Queen Elizabeth had met with 13 sitting American presidents, a symbol of the continuing line and the relationship between the former imperial power and its breakaway colony. Ms. Pierce recalled her dignity, warmth, quick wit and mischievous smile.

Image“She seemed to embody the whole nation and its whole history,” said Karen Pierce, the British ambassador to the United States.Credit…Gabriela Bhaskar for The New York Times

The Queen’s Colour Squadron, which flew in from Britain after performing in the queen’s London tribute, marched into the cathedral’s crossing, opening the hourlong service. The queen herself had visited the cathedral four times during her life, the Rev. Randolph Marshall Hollerith said in his remarks to the congregation.

The service featured less fanfare than the grander Monday tribute in London, where world leaders, including President Biden, were in attendance. But it looked as grand and ritualistic as other funerary services held by the cathedral for revered leaders and former presidents.

Earlier this month, members of Congress paid their respects to the queen on Capitol Hill, where Ms. Pelosi ordered flags to be flown at half-staff and lawmakers took turns memorializing her on the House and Senate floors.