A federal judge had temporarily barred the department from using the records marked as classified in its inquiry into whether the former president illegally retained national defense documents. 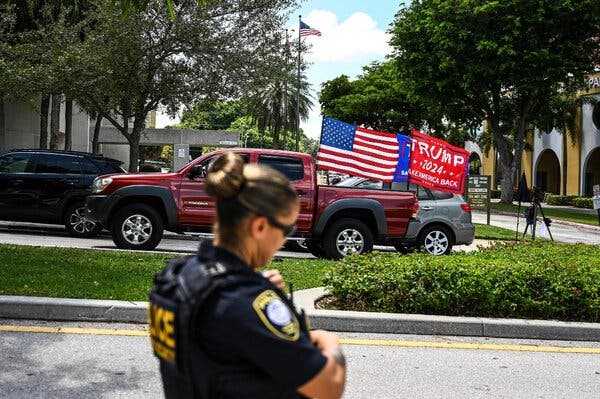 WASHINGTON — A federal appeals court on Wednesday freed the Justice Department to resume using documents marked as classified that were seized from former President Donald J. Trump, blocking for now a lower court’s order that had strictly limited the investigation into Mr. Trump’s handling of government materials.

In a strongly worded 29-page decision, the United States Court of Appeals for the 11th Circuit set aside key parts of an order by a Florida federal judge that has kept the department from using about 100 files with classification markings in its inquiry into whether Mr. Trump illegally retained national defense documents and obstructed repeated efforts to recover them.

The appeals court also agreed with the Justice Department that Mr. Trump’s lawyers — and an independent arbiter recently appointed to review the seized materials — need not look at the classified documents that the F.B.I. carted away from Mr. Trump’s estate, Mar-a-Lago, on Aug. 8.

The Justice Department “argues that the district court likely erred in exercising its jurisdiction to enjoin the United States’ use of the classified records in its criminal investigation and to require the United States to submit the marked classified documents to a special master for review,” a three-judge panel of the appeals court wrote. “We agree.”

The decision by the Atlanta-based court was a repudiation of the decision by Judge Aileen M. Cannon, whom Mr. Trump appointed to the Federal District Court for the Southern District of Florida, to broadly intervene in the Justice Department’s investigation. The appellate ruling will permit the arbiter, known as a special master, to review most of the more than 11,000 files seized from Mar-a-Lago, but allow prosecutors unfettered access to the smaller batch of classified records.

The dispute over the files traces back to Judge Cannon’s decision to install a special master to filter the documents seized in the search of Mar-a-Lago for any that were potentially privileged. She also barred criminal investigators from using the materials until the review was completed, and rejected the Justice Department’s request to exempt the 100 or so records marked as classified from that process.

The appeals court ruled just hours after New York’s attorney general sued Mr. Trump after conducting a separate civil investigation into what she described as fraudulent business practices. A lawyer for Mr. Trump did not immediately respond to a request for comment, including whether he would appeal the matter to the full appeals court or the Supreme Court.

In its initial filing to the appeals court, the Justice Department accepted the special master’s broad review of the documents, narrowly tailoring its request to those bearing classification markings in hopes of restoring quick access to the material at the heart of its investigation. Prosecutors argued that Judge Cannon’s temporary ban on letting them use the classified materials would hinder a separate intelligence community assessment of the risks that Mr. Trump’s hoarding of the records had on national security.

More on the Trump Documents Inquiry

The appeals court agreed with the Justice Department’s argument that prosecutors needed access to the classified materials in order to assist the national security review. It also forcefully rebutted Mr. Trump’s attempts to claim in public — but not in court — that he had declassified the sensitive records at issue.

Mr. Trump “suggests that he may have declassified these documents when he was president,” the appeals court wrote. “But the record contains no evidence that any of these records were declassified.”

The court went on to say, “In any event, at least for these purposes, the declassification argument is a red herring because declassifying an official document would not change its content or render it personal.”

The ruling would significantly streamline the process now underway before the special master, Judge Raymond J. Dearie, whom Mr. Trump’s lawyers had recommended for the role. If it stands, Judge Dearie will no longer have to assess the materials marked as classified, although he would still oversee vetting of the larger trove.

Mr. Trump “has not even attempted to show that he has a need to know the information contained in the classified documents,” the appeals court wrote. “Nor has he established that the current administration has waived that requirement for these documents. And even if he had, that, in and of itself, would not explain why plaintiff has an individual interest in the classified documents.”

The ruling was the latest turn in what began as a legal sideshow to the investigation into Mr. Trump’s retention of sensitive government documents.

In mid-August, Mr. Trump’s legal team filed a lawsuit asking that the Justice Department be blocked from working with the documents. His lawyers also requested a special master with expansive authority to evaluate the records for any that were potentially shielded by attorney-client privilege or executive privilege.

But the F.B.I. had already conducted a separate assessment to identify files that could be subject to attorney-client privilege. And Mr. Trump’s demand for a sweeping review, one subject to claims of executive privilege, was unusual, prosecutors said, noting that there was no precedent or legal basis for it. But Judge Cannon granted Mr. Trump’s request.

During a hearing before Judge Dearie on Tuesday, lawyers for both sides clashed over whether Mr. Trump’s legal team should be allowed to see the files.

A Justice Department lawyer said some of the files were so highly restricted that a top-secret clearance alone would not be deemed sufficient to see them.

“Some of the documents are so sensitive that even members of the team that is investigating possible offenses here have not yet been provided the clearances to see these documents,” said the lawyer, Julie Edelstein.

Another point of contention was whether Judge Dearie might require Mr. Trump or his representatives to definitively state whether he took any action to declassify the materials.

Mr. Trump has claimed publicly that he declassified everything he took from the Oval Office, but no credible evidence has emerged to support that claim and his representatives have stopped short of repeating it in court, where it is a crime to lie. Instead, they have merely implied that Mr. Trump might have done so.

Mr. Trump’s lawyers have argued that it would be premature for them to disclose such information because it could be a defense if Mr. Trump were later to be indicted.

But the 11th Circuit’s decision to remove the documents marked as classified from the special master’s review means that Judge Dearie for now does not need to address either dispute.

The court’s comments about the lack of evidence backing Mr. Trump’s suggestion that he might have declassified the documents dovetailed with an observation by Judge Dearie on Tuesday. The special master suggested that the former president’s lawyers could not credibly insinuate that Mr. Trump might have declassified the records without at some point submitting a formal sworn statement that he had actually done so.

“You can’t have your cake and eat it too,” he said.