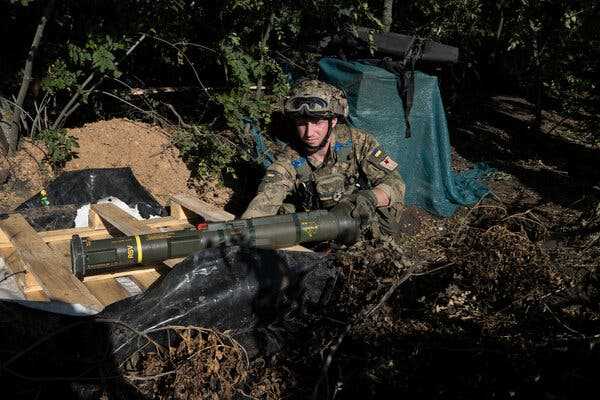 White House and Pentagon officials said the Russian president’s threats would not stall efforts by the Biden administration to continue funneling military aid to Ukrainian forces.

WASHINGTON — American and other Western officials assailed President Vladimir V. Putin’s decision on Wednesday to call up roughly 300,000 military reservists as an act of desperation, and warned the Russian leader of “severe consequences” if he carried out a veiled threat to use nuclear weapons in the Ukraine conflict.

White House and Pentagon officials said Mr. Putin’s threats would not stall or sidetrack efforts by the United States and nearly 50 other nations to continue pouring military, economic and humanitarian aid into Ukraine. The United States alone has committed more than $15 billion in weapons and equipment since Russia’s invasion in February, much of which propelled the recent successful Ukrainian counteroffensive in the country’s northeast.

Although Western officials have expressed concern that if Mr. Putin felt cornered, he might detonate a tactical nuclear weapon — perhaps in a demonstration blast over the Black Sea or Arctic Ocean, or in Ukrainian territory — they said there was no evidence that he was moving those weapons, or preparing such a strike.

“The announcement and associated threats are another sign that Russia is struggling to salvage its illegal occupation of Ukraine,” Brig. Gen. Patrick Ryder, the Pentagon press secretary, said in a statement. “Our focus continues to remain on supporting Ukraine with security assistance as they defend their country.”

In London, British defense secretary Ben Wallace declared that “no amount of threats and propaganda can hide the fact that Ukraine is winning this war.”

In a videotaped speech to the nation on Wednesday, Mr. Putin said: “If the territorial integrity of our country is threatened, we will certainly use all the means at our disposal to protect Russia and our people. This is not a bluff.”

President Biden said in an interview with the CBS show “60 Minutes” on Sunday that Mr. Putin would face a “consequential” response from the United States if he used nuclear weapons, but Mr. Biden and other administration officials have declined to specify that response.

Current and former U.S. military officials were largely skeptical of Mr. Putin’s mobilization plans and said it could take months for Russia to train and equip additional combat-ready troops. They said there was no guarantee that rushing thousands of new forces to the front lines ahead of the winter freeze would reverse Moscow’s startling battlefield setbacks.

“He has suffered tens of thousands of casualties. He has terrible morale and unit cohesion on the battlefield,” John Kirby, a National Security Council spokesman, told “Good Morning America,” on ABC. “He has desertion problems and is forcing the wounded back into the fight. So clearly manpower is a problem for him.”

Michael Kofman, director of Russia studies at CNA, a defense research institute in Arlington, Va., said the Kremlin’s first step would likely be to call up reserve officers and others with more recent military experience to replenish badly depleted units in the field, perhaps in the next month or so. The Russian military has been identifying such personnel for months in anticipation of Mr. Putin’s order, he said.

“Bottom line, it’s not going to change a lot of the problems the Russian military has had in this war, and the military will be limited as to how many additional forces it can deploy in the field,” Mr. Kofman said. “But it does begin to address the structural problems that Russia has had with manpower shortages and will extend Russia’s ability to sustain this war.”

Crucially, Mr. Kofman said, Mr. Putin’s announcement extends indefinitely the service contracts of thousands of soldiers who signed up thinking that they would only serve several months, and enacts policies and penalties to prevent them from refusing deployment to Ukraine or leaving the service.

Even if Moscow can mobilize some reservists quickly, the Russian military faces serious longer-term shortages in equipment, vehicles and weaponry, and generating entire new units to replace those lost in battle might not happen until early next year, some officials said.

“It will be many months before they can be properly equipped, trained, organized and deployed to Ukraine,” said Frederick B. Hodges, a former top U.S. Army commander in Europe. “And without massive artillery support, these new soldiers will be pure cannon fodder, sitting in cold, wet trenches this winter as Ukrainian forces continue to press.”

Mr. Putin’s struggles to mobilize enough regular troops has forced the Kremlin to rely on a patchwork of impoverished ethnic minorities, Ukrainians from the separatist territories, mercenaries and militarized National Guard units to fight the war.

In parts of the eastern Luhansk and Donetsk regions that Russia has occupied since 2014, conscription is mandatory for 18- to 65-year-old men. Many of the frontline fighters are local recruits. Since they are Ukrainian citizens, the Kremlin is cavalier about their casualties, experts said.

“The war will now increasingly be fought on the Russian side by people who do not want to be there,” Rob Lee, a Russian military specialist at the Foreign Policy Research Institute in Philadelphia and a former U.S. Marine officer, said in a Twitter post. “The difference in morale, unit cohesion, and other critical factors between Ukrainian and Russian units will grow even greater.”

American officials and analysts scrutinizing Mr. Putin’s speech and partial-mobilization order — coming a day after Kremlin proxies in eastern and southern Ukraine announced plans on Tuesday for referendums there on annexation to Russia — cautioned that the seven-month-old conflict was entering an even more volatile stage.

“Putin is tripling down — first with the mobilization of reservists, second with the false referendums of citizenship for the occupied territories, and third with a largely unveiled threat to use nuclear weapons,” said Adm. James G. Stavridis, a former supreme allied commander for Europe. “We are at a very dangerous moment, but we cannot allow him to bluff us away from Ukraine.”

U.S. intelligence and other security officials said there is an ongoing debate inside American spy agencies over whether Mr. Putin believes detonating a tactical nuclear weapon would risk Russia’s alienation from the countries it needs most — especially China — or whether he is holding the option in reserve. Officials acknowledged on Wednesday that Mr. Putin was moving up the escalatory ladder.

“We always have to take this kind of rhetoric seriously,” Mr. Kirby said of Mr. Putin’s veiled threat to use nuclear weapons. “We are monitoring as best we can their strategic posture so that if we have to, we can alter ours. We see no indication that’s required right now.”

A senior State Department official told reporters in New York on Tuesday night that the United States has “made clear that there will be increased consequences” if Russian forces expand or bolster their occupation of parts of Ukraine, perhaps as a result of the planned referendums in the Donbas region.

The official said the world has seen the United States use a range of tools in recent months, and insisted allies and partners would be ready to join in any escalation, but declined to give more details about plans.

Mr. Biden warned in the “60 Minutes” broadcast that turning to nuclear or other unconventional weapons would “change the face of war unlike anything since World War II,” an apparent reference to the American use of nuclear weapons on Hiroshima and Nagasaki, Japan.

“They’ll become more of a pariah in the world than they ever have been,’’ Mr. Biden said of Russia.

Adm. Charles A. Richard, head of the military’s Strategic Command, which oversees the Pentagon’s nuclear arsenal, declined in remarks to an Air Force conference on Wednesday to address a potential nuclear crisis in Ukraine.

But then Admiral Richard said, “All of us in this room are back in the business of contemplating competition through crisis and possible direct armed conflict with a nuclear-capable peer. We have not had to do that in over 30 years.”

“This is no longer theoretical,” he added. “I can’t get through a week without a reminder that this is a very real threat that we face.”