On the eve of the state’s primary on Tuesday, mainstream Republicans have been vying to stop an election denier running for Senate. 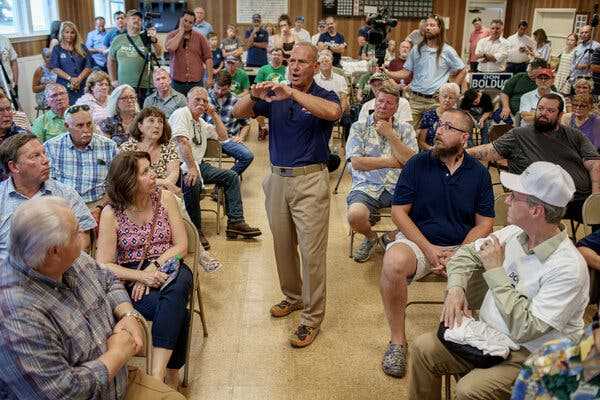 Don Bolduc, center, during a campaign appearance at the American Legion in Laconia, N.H., on Saturday.

An intramural Republican fight over New Hampshire’s nominee for the Senate entered its final day on Monday with Gov. Chris Sununu and national Republicans working furiously to try to block a Trump-style 2020 election denier, Don Bolduc, whom they perceive as too extreme to win in November.

As former President Donald J. Trump remained on the sidelines — despite private appeals from a more mainstream Republican, Chuck Morse, the president of the State Senate, for Mr. Trump to throw him his support — Mr. Bolduc appeared in strong position to get on the ballot against Senator Maggie Hassan, one of the most vulnerable Democrats in the evenly divided chamber.

The contests in New Hampshire on Tuesday are some of the final primary elections of the year. Delaware and Rhode Island are also holding primaries on Tuesday, but Louisiana is technically the last on the calendar. Voters in Louisiana cast their primary ballots on Nov. 8, the same day as the general election.

In addition to the Senate contest, Republicans in New Hampshire are also vying in primaries for the right to challenge Democratic incumbents for the state’s two congressional seats, including one pitting two former members of the Trump administration against each other, with insults flying over who truly embodies the Make America Great Again movement.

Both House contests in the state are viewed as tossups in November and will play a role in whether Republicans take over the chamber. The stakes are just as high in the Senate race, with the winner in November helping to determine whether control of the 50-50 Senate will remain in Democratic hands or flip to Republicans, stymieing the remaining years of President Biden’s term.

The Senate race has featured an extraordinary joint effort by Republican leaders and Mr. Sununu to block Mr. Bolduc, a retired Army general whom many Republican officials perceive as too extreme to win a general election in purple-hued New Hampshire.

In an opinion column in The New Hampshire Union Leader on Sunday, Mr. Sununu repeated his earlier endorsement of Mr. Morse, writing that he is the “candidate who Maggie Hassan is most afraid to face.”

Earlier, Mr. Sununu, a popular moderate, had accused Mr. Bolduc of being a “conspiracy-theory extremist” whom most voters did not take seriously.

At a recent debate, Mr. Bolduc stood by the false claim that Mr. Trump won the 2020 election. He has also said he was open to abolishing the F.B.I. after agents executed a search warrant on Mr. Trump’s Florida estate in search of classified documents. And last year, he called Mr. Sununu a “communist sympathizer” whose family “supports terrorism,” statements he has since backed away from.

Mr. Bolduc, who has held some 50 town-hall-style events around the state in a two-year campaign that helped him build a strong following, said last week that when voters hear him out, they do not find him extreme.

“I’ve had town halls with Republicans, independents, Democrats, libertarians, and when they meet me, they’re like, ‘This guy’s not a fascist. This guy isn’t anything that they say he is,’” Mr. Bolduc told a conservative podcast, “Ruthless.”

A Trump endorsement might still influence the race, although its impact has diminished with each passing day.

Mr. Trump was considering an endorsement of Mr. Morse, but it was unclear whether he would pull the trigger, according to Republicans who have spoken with the former president. Mr. Morse met with Mr. Trump on Sept. 2 in Bedminster, N.J., where Mr. Trump owns a golf club, and the two men spoke again by phone on Thursday, according to people familiar with the conversations.

Aides to both men described the conversations as pleasant and positive. During their meetings, Mr. Trump complimented Mr. Morse’s fund-raising prowess in the state and his record of public service. After their meeting, Mr. Trump invited Mr. Morse and his team to have dinner at his club before returning home. But Mr. Trump did not join Mr. Morse for dinner that evening, and people close to the former president said Mr. Trump seemed less excited about Mr. Morse’s candidacy compared with other Senate candidates he has backed this year.

In a radio interview this month, Mr. Trump sounded as if he was leaning toward an endorsement of Mr. Bolduc.

“He said some great things, strong guy, tough guy,” Mr. Trump said of Mr. Bolduc, who served 10 tours of Afghanistan and reached the rank of brigadier general. “I think he’s doing very well, too. I hear he’s up, he’s up quite a bit.”

ImageIn polls, Mr. Bolduc, center, has led by double digits, although as many as one in four Republican likely voters were undecided.Credit…John Tully for The New York Times

Mr. Trump has made other last-minute endorsements this year, but usually he waits for a front-runner to emerge, letting him run up his win-loss record and boast of his political influence.

In polls, Mr. Bolduc has led by double digits, although as many as one in four Republican likely voters were undecided. The Morse campaign hopes that a blitz of TV ads — primarily $4.5 million by an outside Republican group that wants to stop Mr. Bolduc — will move those undecided voters toward Mr. Morse.

“We couldn’t be in a better position right now,’’ said David Carney, a strategist for Mr. Morse, adding, “Gen. Don Bolduc isn’t on TV, he has no radio, there’s no message, no way to reach new people — and we do.”

National Democrats have also jumped into the race, portraying Mr. Morse in TV ads as “another sleazy politician.” The goal of the Democratic group behind the ads — the Senate Majority PAC, which is aligned with Senator Chuck Schumer of New York, the majority leader — is to drive voters toward Mr. Bolduc, whom Democrats would rather face in November.

In all, a total of $33 million has poured into TV and radio ads for tiny New Hampshire’s Senate race since the start of the year, according to the media tracking firm AdImpact — not unusual for a competitive Senate election. The influx includes $13 million from Ms. Hassan and Democratic super PACs aimed at shoring up her image. One ad from an outside group touts Ms. Hassan for “taking on her own party” by pushing for a federal gasoline tax holiday.

Senate Leadership Fund, a Republican super PAC run by allies of Senator Mitch McConnell of Kentucky, the minority leader, has booked over $22 million for the general election in the state, although it is unclear if the commitment would hold should Mr. Bolduc become the nominee.

In New Hampshire’s First Congressional District, two former members of the Trump administration are vying to be the purest embodiment of the Trump wing of the Republican Party in a contentious primary that is drawing nearly as much attention as the Senate race.

Matt Mowers, 33, who is a veteran of Mr. Trump’s State Department and who has the endorsement of Representative Kevin McCarthy of California, the Republican leader, was the early front-runner. But in recent days, Karoline Leavitt, 25, has gained traction. Ms. Leavitt, who worked in the White House press office, has been mimicking the inflammatory language of Mr. Trump and appealing to his unflinching loyalists. She has the backing of hard-right Republicans in Congress, including Representatives Lauren Boebert of Colorado and Jim Jordan of Ohio.

At a recent debate, when asked about impeaching Mr. Biden, Mr. Mowers said he favored hearings to weigh if charges were justified. Ms. Leavitt was unequivocal: She supported impeachment.

As in the Senate primary, outside Republican money has poured in to support Mr. Mowers and attack Ms. Leavitt, in the belief that she would be a weaker opponent against the Democratic incumbent, Representative Chris Pappas. “The Establishment knows I am the greatest threat to their handpick puppet Matt Mowers,” Ms. Leavitt wrote recently on Twitter. Polls have shown the race in a statistical tie.

New Hampshire’s Second Congressional District is also seen as competitive in November, although Republican challengers to the longtime Democratic incumbent, Representative Annie Kuster, have done less to raise their profiles and break out of a crowded field.

In a University of New Hampshire poll of the race released late last month, nearly four in 10 voters remained undecided.