Democratic candidates have been trying to signal their independence from the White House, while not distancing themselves from his base or his agenda. 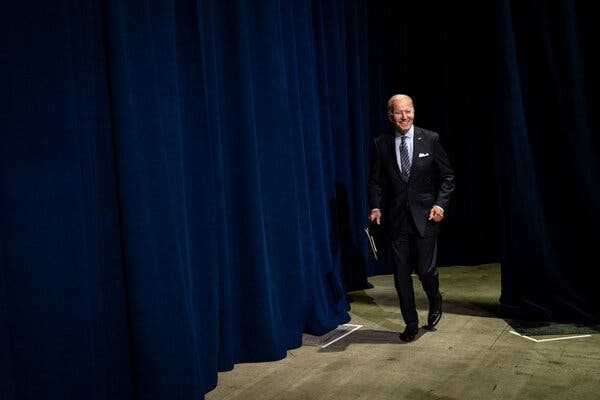 President Biden takes the stage at the summer gathering of the Democratic National Committee on Sept. 8. The last time a party maintained control of Congress with an unpopular president was in 1978.

When President Biden appeared in central Ohio on Friday for the groundbreaking of a semiconductor manufacturing facility, he was joined by Tim Ryan, the Democrat running for Senate. The party’s candidate for governor, however, did not attend, saying from afar that she appreciated Mr. Biden’s visit to her state.

Five days earlier, in Wisconsin, another crucial midterm battleground, the situation was reversed: Gov. Tony Evers shared a stage with the president at a Labor Day speech, while the state’s Democratic candidate for the Senate stayed away, marching in a parade beforehand but skipping Mr. Biden’s address.

As they move into the final stretch of the midterm campaigns, Democratic candidates find themselves performing a complicated dance with an unpopular president, whose approval rating is rising but still remains stubbornly underwater. In ways big and small, Democrats have been trying to signal their independence from the White House, without alienating their base or distancing themselves from key parts of Mr. Biden’s agenda.

It’s a dynamic that presidents often confront in midterm cycles. What has been especially striking this year is the degree to which Democrats have outperformed the president. Even those who say they somewhat disapprove of Mr. Biden were more inclined to vote for Democrats than Republicans in a Pew Research Center survey last month. Private polling conducted for the House Democratic campaign committee found that the net job approval of their most vulnerable incumbents, on average, was more than 20 points ahead of Mr. Biden’s, a dynamic that emerged as early as April and remained consistent at least through late August, according to a committee official.

The distance between Mr. Biden and his party has forced Democrats to chart a particularly treacherous course in these midterms, in which success means defying nearly a half century of political history. The last time a party maintained control of Congress with a relatively unpopular president was in 1978. That November, Jimmy Carter’s approval rating hovered around 50 percent and Mr. Biden won re-election to a second Senate term.

Those races are ancient history now to most in his party, who must navigate an intricate set of political decisions about how to deploy their leader in the midterms as the president accelerates his fall campaign schedule. The tensions are most acute in Senate races, where Democrats see a stronger opportunity to retain control than in the House. Candidates in both House and Senate contests have said pointedly, when asked about the president, that they are focused on their own races.

“We’ve been very clear that I disagree with the president on things,” said Mr. Ryan, the Ohio congressman and Senate candidate whose contest in recent weeks has become more competitive than originally expected in a fairly Republican state. “People recognize that I am going to be for Ohio.”

Mr. Biden has joked that he will campaign for or against a candidate, “whichever will help the most” — a lighthearted acknowledgment from a political veteran that each candidate must make their own political calculations about their ties to the White House. Party leaders, candidates and the president have sought to recast the election as a choice between two radically different visions for the country, rather than the traditional midterm referendum on the president and his agenda.

But the president’s advisers say they believe that Mr. Biden — who was a highly sought-after surrogate in 2018 — remains one of his party’s strongest messengers.

In recent weeks, he has traveled to Maryland, Ohio, Pennsylvania and Wisconsin for events, appearing with a number of Democrats in challenging races. This week, he plans to appear with Maura Healey, the Democratic nominee for governor of Massachusetts, and is expected to headline a fund-raiser for Gov. Gretchen Whitmer of Michigan, a Biden adviser said.

At a summer gathering of the Democratic National Committee in Maryland, where Mr. Biden spoke on Thursday, a number of party officials argued that the president should be embraced across the country, emphasizing the burst of legislative achievements enacted under his watch in recent weeks. His allies argue that, unlike in 2010 and 2014, when vulnerable Democrats ran away from signature accomplishments of the Obama administration like the Affordable Care Act, many candidates are running on Mr. Biden’s agenda this year.

“He has so many bold and broad accomplishments that he can go a bunch of places and talk to people about what he was able to accomplish,” said Cedric Richmond, a close Biden adviser who was dispatched to the D.N.C. ahead of the midterm campaigns.

That balancing act between supporting Mr. Biden’s agenda and keeping the president at arm’s length will only become more difficult this fall, as Republicans plan to unleash tens of millions of dollars of advertising tying Mr. Biden to candidates.

Mr. Biden’s recent visits to key swing states have prompted grumbling from strategists who fear the visits distract from their efforts to localize their races and keep the focus on missteps by their Republican opponents.

Some candidates, like Mandela Barnes, the Senate nominee in Wisconsin, have skipped stops with the president. Former Representative Joe Cunningham, a South Carolina Democrat now running for governor in that largely conservative state, has gone further than many in his party by openly calling on Mr. Biden to forgo re-election to make way for a younger generation.

Another group of candidates has highlighted policy disagreements on issues like Mr. Biden’s student loan proposal and his plans to lift Covid-era border restrictions, in an effort to appeal to the independent voters who helped power Mr. Biden’s victory.

Many try to reference the president only in passing, if at all. Just three Democrats have run ads that even mention Mr. Biden in their general election campaigns, all of which stress their independence from the president, according to AdImpact, the media tracking firm.

Representative Kim Schrier, Democrat of Washington, has aired an ad highlighting her political independence, featuring both a Republican and a Democratic mayor and emphasizing her work on bills passed under both Mr. Biden and former President Donald J. Trump. Earlier this summer, she aired an ad that highlighted “taking on the Biden administration to suspend the gas tax.”

“I will work with anybody for the benefit of the district,” she said in an interview. “I will also hold either president accountable” when it comes to constituent interests, she said.

Representative Sean Patrick Maloney, the chairman of the House Democratic campaign arm, said that, overall, candidates in tight races are “making some version of the same argument, which is, ‘I know you have doubts about my party, but I’m getting the job done.’”

A number of candidates have appeared with Mr. Biden in their capacities as government officials when he has visited their states to tout legislative achievements. It has been a way to suggest that they are fighting at the highest levels for local priorities, without necessarily rallying with him.

When the president appeared in Wilkes-Barre, Pa., in late August to discuss public safety, touting the federal money going to bolster community policing in the area, Josh Shapiro, the Democratic nominee running for governor, was in attendance — in his government role as state attorney general, his office indicated.

Whether voters draw such distinctions is another matter, especially because Mr. Biden has discussed the midterm elections at some of these events. In Pennsylvania, he praised Mr. Shapiro as well as John Fetterman, the Democratic nominee for Senate. Mr. Fetterman did not attend that event but later appeared with Mr. Biden in Pittsburgh on Labor Day. At one point in Wilkes-Barre, Mr. Biden reversed the offices for which they were running, saying of the roughly 6-foot-8 Mr. Fetterman, “Elect that big ol’ boy to be governor.”

Mr. Biden, too, has a lot at stake in these elections. Midterm victories could provide a powerful counterpoint to those in the party arguing that he should not run for re-election in 2024. The president has already positioned the midterm races as a proxy war with his former rival, Mr. Trump, who harbors his own ambitions for a second presidential term.

Representative Tom Malinowski, a New Jersey Democrat running in a highly competitive seat, said he felt “​​much better about things than I did three or four months ago.” He said the political landscape seemed to be changing because of the spurt of legislative achievements Democrats had landed and concern over abortion rights, while Republicans “seem increasingly stuck in the mud of Mar-a-Lago.”

Asked if it would be helpful for the president to campaign with him, Mr. Malinowski replied, “I’d be happy for Biden or any president to come to my district to help me deliver for my constituents as he has.”

“Donald Trump,” he added, “came to my district to play golf.”