A man was charged with trespassing, tampering and vandalism on Tuesday night, the United States Park Police said. Efforts to clean the monument’s base could take days, a parks service spokesman said. 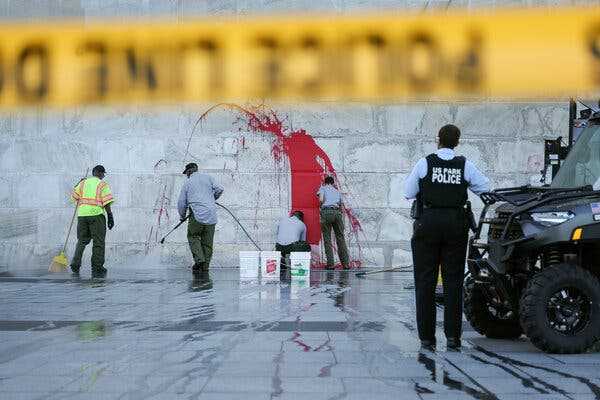 Conservationists were working to clean the Washington Monument on Wednesday after it was vandalized with a vulgar, anti-government statement in red paint, parks authorities said.

A man was arrested and charged on Tuesday night, the police said. The man, Shaun Ray Deaton, 44, of Bloomington, Ind., was charged with trespassing, tampering and vandalism, the United States Park Police said. The investigation is still ongoing and additional charges could be added, the authorities said.

The area on the west side of the monument was closed while workers, who started cleaning at 5 a.m. Wednesday, continued working to remove the paint, Mike Litterst, a spokesman for the National Mall and Memorial Parks, said. The work could take several days, and there is no timetable for completion, Mr. Litterst said.

The entrance to the monument, on the opposite side, was unaffected, and the monument opened to visitors on time.

The defacement at the base of the monument, in red paint, was of a large vertical block and a vulgar, anti-government expression.

The top layer of paint had started to come off and the pigment that seeped into the stone was undergoing treatment with many rounds of a cleaning product, Mr. Litterst said.

ImageCleaning the monument could take days, said Mike Litterst, a spokesman for the National Mall and Memorial Parks.Credit…Kevin Dietsch/Getty Images

By Wednesday morning, the words had been largely wiped away and a faded version of the red block remained visible on the granite-and-marble structure.

“A week of sunlight will also help return the monument to its usual impressive state,” the park service said.

The Washington Monument was closed for nearly three years after a 5.8-magnitude earthquake in 2011 left cracks in the structure. It was closed again between 2016 and 2019 to modernize its elevator and security systems.

Hundreds of thousands of people ride up to the Washington Monument’s observation deck each year. Built over two phases of construction lasting from 1848 to 1884 and named after the country’s first president, it is one of the world’s tallest free-standing masonry structures at 555 feet.

Visitors can obtain tickets online or in person to go to the monument’s observation deck. Walk-up tickets are given for same-day entry on a first-come, first-served basis. Advance tickets can be booked online up to one month or 24 hours before a visit.

ImageSunlight will help return the monument to its original state, the park service said.Credit…Kevin Dietsch/Getty Images

There has been a spate of instances of violence directed at public buildings and officials since the Jan. 6, 2021, attack on the Capitol. In August, a man died from a self-inflicted gunshot wound after driving his car into a barricade near the U.S. Capitol building.

The motive behind the vandalism at the Washington Monument was unclear. The police asked anyone with information to contact a tip line at 202-379-4788 or via email.