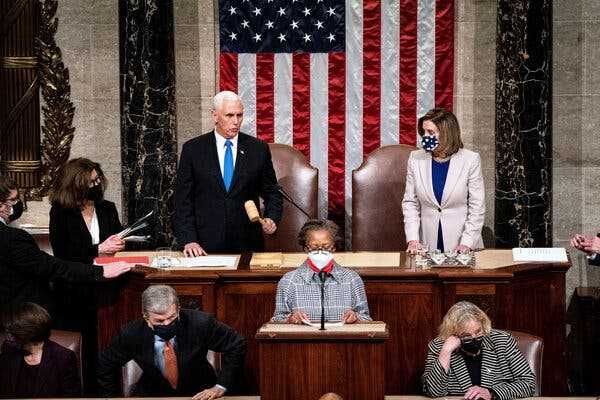 Vice President Mike Pence and Speaker Nancy Pelosi presiding over the counting of Electoral College votes in the Capitol on Jan. 6, 2021. The legislation would define the vice president’s role as strictly ministerial.

WASHINGTON — The House on Wednesday took the first major step to respond to the Jan. 6, 2021, assault on the Capitol, voting mostly along party lines to overhaul the 135-year-old Electoral Count Act, the law that former President Donald J. Trump tried to exploit that day to overturn his defeat.

The bill was the most significant legislative answer yet to the riot and the monthslong campaign by Mr. Trump and his allies to invalidate the 2020 presidential election, but it also underscored the lingering partisan divide over Jan. 6 and the former president’s continuing grip on his party.

It cleared a divided House, passing on a 229 to 203 vote. All but nine Republican opposed the measure, wary of angering Mr. Trump and unwilling to back legislation co-written by Representative Liz Cheney, Republican of Wyoming and a leader of the House select committee investigating the events of Jan. 6 and what led to them.

The partisan division could complicate future negotiations with the Senate, which is moving ahead with its own bipartisan version of the legislation that differs from the House bill in some significant respects. Lawmakers now say they do not expect final approval before Congress returns for a lame-duck session after the Nov. 8 midterm elections.

The legislation is aimed at updating the law that governs Congress’s counting of the electoral votes cast by the states, the final step under the Constitution to confirm the results of a presidential election and historically a mostly ceremonial process. Democrats said that the aftermath of the 2020 election, when Mr. Trump and his allies set in motion a failed plan to throw out legitimate electoral votes and keep him in power, leading to the violent disruption of the congressional count by his supporters on Jan. 6, made clear that the statute needed to be changed.

“These are common sense reforms that will preserve the rule of law for all elections moving forward,” said Representative James P. McGovern, Democrat of Massachusetts and chairman of the Rules Committee. “Time is running out before the next election.”

One key provision in the bill, which is also contained in the Senate proposal, would clarify that the role of the vice president, who by law presides over the counting of the ballots in his capacity as president of the Senate, is strictly ministerial. After the 2020 election, Mr. Trump and his advisers tried but failed to persuade Vice President Mike Pence to refuse to accept electoral votes from states where Trump was falsely claiming that he had won.

The measure also would raise the threshold substantially for Congress to consider an objection to a state’s electoral votes, requiring that at least one-third of the House and Senate sign on to such a challenge, up dramatically from the one member of each chamber that is now required. The Senate proposal has a lower threshold, requiring one-fifth of the House and Senate to agree.

Members of both parties have raised objections in recent elections, though none have been sustained by a majority of the House and Senate. The House bill would also more narrowly define the grounds for an objection to those with a defined constitutional basis.

“Ultimately, this bill is about protecting the will of the American voters, which is a principle that is beyond partisanship,” said Representative Zoe Lofgren, the California Democrat who leads the Administration Committee and introduced the measure with Ms. Cheney. “The bottom line is if you want to object to the vote, you’d better have your colleagues and the Constitution on your side.”

The legislation is also a direct response to Mr. Trump’s efforts to orchestrate the submission of fake slates of electors in states won by Joseph R. Biden Jr. It would require that states choose their electors under laws in place before the election, a provision intended to prevent states from reversing course if they do not like the result. And the bill would allow candidates to sue state officials if they failed to submit their electors or certified electors that did not match the election results.

It also would lay out the circumstances in which a federal judge could extend an election following a catastrophe and force election officials to count ballots or certify an election if they refused to do so.

ImageRepresentative Liz Cheney, Republican of Wyoming, sponsored the bill along with Representative Zoe Lofgren, Democrat of California.Credit…Kim Raff for The New York Times

Republicans said the legislation represented a renewed Democratic attempt to exert more federal control over elections that are usually the responsibility of state officials and courts.

Representative Tom Cole, Republican of Oklahoma, called it “another attempt to federalize elections at the expense of states.” Other Republicans accused Democrats of rushing the legislation to the floor without review by the appropriate committees or engaging Republicans.

They also accused Democrats of using the bill to take aim at Mr. Trump, portraying the legislation as an extension of the work of the special committee investigating Jan. 6, which most House Republicans decry as a partisan exercise aimed at blaming Mr. Trump for the assault on the Capitol.

“This is nothing more than an attack on President Trump and the 2020 election, an attack on a man who has not been in office for nearly two years,” said Representative Guy Reschenthaler, Republican of Pennsylvania.

Lawmakers said the legislation’s close association with Ms. Cheney led House Republicans to abandon it in large numbers. Her aggressive criticism of Mr. Trump prompted Republicans to remove her from a party leadership position in May and she lost her re-election primary last month.

But Ms. Cheney noted strong support for the measure from conservative jurists and analysts and called on Republicans to embrace it.

“If your aim is to prevent future efforts to steal elections, I would respectfully request that conservatives should support this bill,” she said on the House floor. “If instead your aim is to leave open the door for elections to be stolen in the future, you might decide not to support this or any other bill to address the Electoral Count Act.”

Leaders of the bipartisan group behind the Senate bill, which was made public in July, were surprised by the sudden House action on the legislation just days after it was introduced and after months with few details on how the House was proceeding. Backers of the Senate bill said the House approach could lead to more election lawsuits, a prospect that could increase Republican opposition. But they remain hopeful the bills could be reconciled.

“We can work together to try to bridge the considerable differences,” said Senator Susan Collins, Republican of Maine and one of the chief authors of the Senate bill. “But it would have been better if we had been consulted prior to the House sponsors deciding to drop their bill.”

The Senate Rules Committee is scheduled to consider that chamber’s version next week. Senator Amy Klobuchar, Democrat of Minnesota and the chairwoman of the panel, is preparing a new version that incorporates changes sought by election experts and other lawmakers in hopes of enhancing its chances of approval. The legislation so far has at least 10 Republican backers, meaning it could overcome a G.O.P. filibuster if all Democrats supported it.

Despite the differences, supporters of the legislation said it needed to become law.

“Failure is not an option,” said Representative Pete Aguilar of California, a member of the Democratic leadership and the Jan. 6 panel. “We’ve got to put a piece of reform on the president’s desk. We’ve got to protect democracy.”