We spoke with Julie Hirschfeld Davis, the congressional editor at The Times, about the latest maneuvering and drama in Washington. 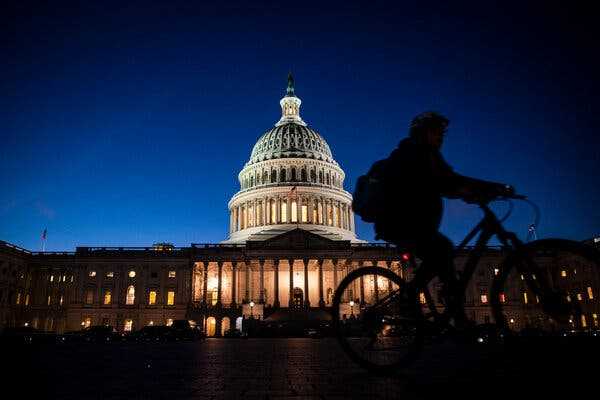 In the expectations game that is American politics, losing is the new winning.

Republicans are putting their would-be House speaker, Representative Kevin McCarthy of California, through a grueling series of public tests, with his ultimate fate uncertain. So far, at least five Republicans have said they will oppose McCarthy’s bid when it comes up for a vote of the full House in January. He needs 218 votes.

By contrast, House Democrats have all but anointed their new leaders, a triumvirate of Representatives Hakeem Jeffries of New York, Katherine Clark of Massachusetts and Pete Aguilar of California.

By the end of a process that took place largely in private, over the course of months, the three lawmakers quietly secured overwhelming support and boxed out possible rivals, like Representatives Adam Schiff of California and Pramila Jayapal of Washington. If the election or the leadership transition exposed any major ideological cracks in the Democratic firmament of the House, they are not evident yet.

Speaker Nancy Pelosi stepped aside, as did her lieutenants, Steny Hoyer of Maryland and James Clyburn of South Carolina. Assuming all goes as planned, the average age of the Democrats’ House leadership trio will plummet from 82 to 51 years old.

To unpack why Democrats have fallen in line while Republicans have not, I chatted with Julie Hirschfeld Davis, the congressional editor at The New York Times. Here is what she said:

Democrats seem to have stage-managed their transition to new House leaders with as little drama as possible, while Republicans may be in for a rocky few weeks. What explains the difference?

You have to look at how different the personalities and political situations of the two parties are right now.

Republicans are coming off a historically disappointing midterm election that delivered them a very slim majority and only one chamber of Congress, so they are in finger-pointing and recrimination mode, and that always exacerbates divisions.

The Aftermath of the 2022 Midterm Elections

A moment of reflection. In the aftermath of the midterms, Democrats and Republicans face key questions about the future of their parties. With the House and Senate now decided, here’s where things stand:

Biden’s tough choice. President Biden, who had the best midterms of any president in 20 years as Democrats maintained a narrow hold on the Senate, feels buoyant after the results. But as he nears his 80th birthday, he confronts a decision on whether to run again.

Is Trump’s grip loosening? Ignoring Republicans’ concerns that he was to blame for the party’s weak midterms showing, Donald J. Trump announced his third bid for the presidency. But some of his staunchest allies are already inching away from him.

G.O.P leaders face dissent. After a poor midterms performance, Representative Kevin McCarthy and Senator Mitch McConnell faced threats to their power from an emboldened right flank. Will the divisions in the party’s ranks make the G.O.P.-controlled House an unmanageable mess?

A new era for House Democrats. Speaker Nancy Pelosi, the first woman to serve in the post and the face of House Democrats for two decades, will not pursue a leadership post in the next Congress. A trio of new leaders is poised to take over their caucus’s top ranks.

Divided government. What does a Republican-controlled House and a Democratic-run Senate mean for the next two years? Most likely a return to the gridlock and brinkmanship that have defined a divided federal government in recent years.

Democrats, on the other hand, are celebrating a much better than expected outcome that allows them to maintain control of the Senate and a strong enough minority in the House to actually make life pretty hard for Republicans if they can hold together — or even to potentially get some stuff done that they want — and now they have real incentive to do that.

Then you have these two leaders who could not be less similar. McCarthy, the Republican nominee for speaker, has been in a pretty precarious position in his party for some time now. He’s had to walk this tricky balance between being a mainstream conservative leader and catering to the extreme right of his conference, which views him with suspicion and has really grown in influence and now feels very emboldened to shape what the new Republican majority is going to look like. He has never been the type of leader to be able to exercise any real discipline over his people, and certainly is not in a position to do so now.

Contrast that with Pelosi, who is basically at the peak of her power even though her party just lost the majority. She has been extremely effective in controlling her caucus, including finding ways to manage a pretty restive progressive left, and has put a lot of time and energy and negotiating over the years into orchestrating exactly the outcome she wants and thinks is best for her party.

Also remember that Pelosi’s critics in the Democratic ranks have been clamoring for a long time now for her to finally let go of the reins and allow another generation of leaders to ascend, so Democrats have the added benefit of a lot of pent-up appetite for this to happen.

That’s another reason you saw the other two leaders below her, Hoyer and Clyburn, step aside relatively easily. They knew that even if they didn’t want to follow Pelosi out of leadership, the rank and file really wanted this change. Without her freezing everything in place, as she has for many years, they weren’t going to be able to push against that tide.

ImageRepresentative Hakeem Jeffries is likely to replace Speaker Nancy Pelosi as the leader of House Democrats.Credit…Al Drago for The New York Times

Jeffries has big shoes to fill. Are there any signs so far that he intends to run the Democratic caucus differently than Pelosi did?

It’s hard to imagine anyone running the Democratic Caucus quite like Pelosi did, and she and Jeffries are quite different.

He does not have anywhere near the track record that she has, either in shepherding major, complex pieces of legislation through the House or in raising the kind of money Pelosi has, so there is going to be a fairly steep learning curve on both of those things. Jeffries also came up in politics in New York City as an insurgent trying to shake up the machine, so he’s less of a party boss type than Pelosi is, and he’ll be under some pressure from the rank and file to run things in a less top-down kind of a way.

That said, he has had a front-row seat to Pelosi’s pretty masterly command of her people and the dividends that can pay at critical times, so there will be a temptation to try to emulate some of that. Will he be able to? Unclear.

Pelosi has said that she doesn’t intend to be dishing out unsolicited advice, even though she hasn’t resigned her seat. Are Democrats happy with that unusual arrangement, or is there any concern that she’ll overshadow the new team?

I think most Democrats take her at her word that she wants to step way back, but it will be interesting to see what that looks like. Those of us who have covered Pelosi closely over the years have a hard time imagining her as a backbencher. This is not a woman who likes to cede control.

But part of what we saw last week was a leader who is now very focused on having a graceful exit, on not being seen as clinging to power after she is no longer wanted, and on using her remaining time in public life to burnish her legacy. So my guess is she will figure out a way to hang back and be a presence, but not an overwhelming one.

Life in the House minority can be pretty dispiriting. Are Democrats more in a mind-set to battle Republicans and take back power or to try to find ways to work with them over the next two years?

I think it depends on whom you ask. There are a lot of moderates who recognize that with a very small Republican majority there is an opportunity for Democrats to potentially get things done and to play a pretty pivotal role, since their votes will be needed to compensate for the hard-right votes on the Republican side that simply won’t be there for most major legislation.

And in the Senate, there is a real desire to do as much of that as Republicans are willing to, though it’s not clear how much political space there will be for that kind of cooperation.

But I would also say there are a fair number of Democrats who will be very reluctant to work with members of a party that they consider completely extreme and irredeemable, and who will be doing whatever they can to fight the Republican agenda.

What to read tonight