Ms. Murkowski was the only Senate Republican up for re-election this year who voted to convict former President Donald J. Trump in his impeachment trial after the Jan. 6, 2021, riot. 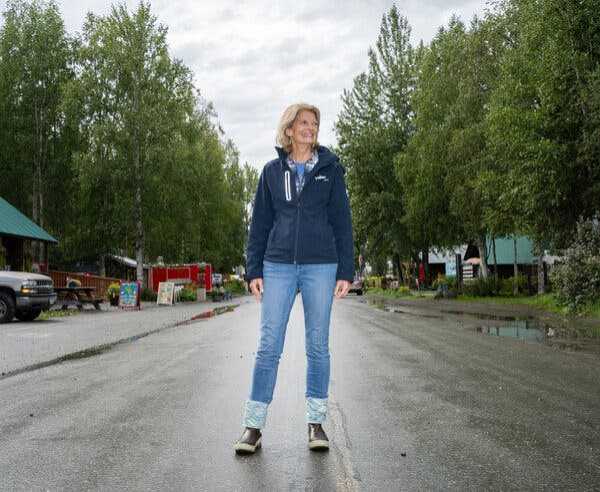 Senator Lisa Murkowski in Talkeetna, Alaska, this past summer. She was facing Kelly Tshibaka, a conservative rival backed by Donald J. Trump and the state Republican Party, and Pat Chesbro, a Democrat.

Senator Lisa Murkowski of Alaska, a centrist Republican, won a fourth full term on Wednesday, according to The Associated Press, overcoming a conservative backlash against her independent streak and her vote to convict former President Donald J. Trump for incitement of insurrection after the Capitol riot on Jan. 6, 2021.

Ms. Murkowski was declared the winner after securing more than 50 percent of the vote, a mandated threshold under the state’s new ranked-choice system. She defeated Kelly Tshibaka, a conservative rival backed by Mr. Trump and the state Republican Party, and Pat Chesbro, a Democrat.

While Democrats have maintained their control of the Senate, Ms. Murkowski is now positioned to remain a pivotal swing vote in the chamber and to wield significant seniority on the Senate Indian Affairs Committee and the Appropriations Committee, which controls government funding. A Senate runoff election in Georgia on Dec. 6 will determine if the upper chamber remains evenly divided, or if Democrats will secure a 51st seat.

With 135,972 votes after multiple rounds of tabulation, Ms. Murkowski secured 53.7 percent of the vote, the Alaska Division of Elections said. Ms. Tshibaka received 46.3 percent and 117,299 votes, while Ms. Chesbro was eliminated in an earlier round with a total of 29,078 votes.

“I am honored that Alaskans — of all regions, backgrounds and party affiliations — have once again granted me their confidence to continue working with them and on their behalf in the U.S. Senate,” Ms. Murkowski said in a statement. “I look forward to continuing the important work ahead of us.”

In a statement, Ms. Tshibaka congratulated Ms. Murkowski, even as she criticized the ranked-choice system and Republican leaders in Washington for pouring millions of dollars into the race. She said the election “turned out to be another victory for the Washington, D.C. insiders who rarely have our best interests at heart.”

The Aftermath of the 2022 Midterm Elections

A moment of reflection. In the aftermath of the midterms, Democrats and Republicans face key questions about the future of their parties. With the House and Senate now decided, here’s where things stand:

Biden’s tough choice. President Biden, who had the best midterms of any president in 20 years as Democrats maintained a narrow hold on the Senate, feels buoyant after the results. But as he nears his 80th birthday, he confronts a decision on whether to run again.

Is Trump’s grip loosening? Ignoring Republicans’ concerns that he was to blame for the party’s weak midterms showing, Donald J. Trump announced his third bid for the presidency. But some of his staunchest allies are already inching away from him.

G.O.P leaders face dissent. After a poor midterms performance, Representative Kevin McCarthy and Senator Mitch McConnell faced threats to their power from an emboldened right flank. Will the divisions in the party’s ranks make the G.O.P.-controlled House an unmanageable mess?

A new era for House Democrats. Speaker Nancy Pelosi, the first woman to serve in the post and the face of House Democrats for two decades, will not pursue a leadership post in the next Congress. A trio of new leaders is poised to take over their caucus’s top ranks.

Divided government. What does a Republican-controlled House and a Democratic-run Senate mean for the next two years? Most likely a return to the gridlock and brinkmanship that have defined a divided federal government in recent years.

“I will continue to fight for Alaska and for we, the people, but will take some time to reflect upon what that may look like,” she said.

Ms. Murkowski was the only Senate Republican up for re-election this year who voted to convict Mr. Trump, a move that prompted a fierce backlash from Republicans in her state. She has also frustrated her party by supporting Democratic nominees for the Supreme Court and for positions in President Biden’s administration.

She has played a key role in negotiating several bipartisan compromises, including the $1 trillion infrastructure law, which she highlighted in several appearances across her state. Ms. Murkowski, one of just two Senate Republicans who support abortion rights, has expressed support for codifying abortion rights after the Supreme Court overturned Roe v. Wade and openly expressed her dismay over the decision.

Ms. Tshibaka had sought to capitalize on conservative wrath against Ms. Murkowski, who retained the backing of Senator Mitch McConnell of Kentucky, the minority leader, and his allies. But the use of ranked-choice voting, as well as an open primary system that sent the top four candidates regardless of party through to the general election, was championed by some of her allies in part to help centrist candidates like Ms. Murkowski.

State law allows absentee ballots to be counted up to 15 days after Election Day if postmarked by then and sent from outside the United States. Election officials decided to wait to tabulate rounds of ranked-choice voting until all ballots were counted.

Because none of the candidates appeared to have secured more than 50 percent of the votes by Nov. 23 — 15 days after Election Day — Alaskan election officials tabulated the next round of votes once all ballots were counted.

Ms. Murkowski has beaten back conservative challengers before with the support of Democrats, centrists and Alaska Native voters, including in 2010, when she won a write-in campaign. But in interviews, she has acknowledged that this campaign carried a different significance, as more centrists have been driven out by the extremes of her party.

With Republican votes needed to push any legislation over the 60-vote filibuster threshold through the regular legislative process, Democrats are likely to turn to Ms. Murkowski as a negotiating partner for must-pass spending legislation and bills needed to raise the cap on the nation’s borrowing limit under an era of divided government come January.