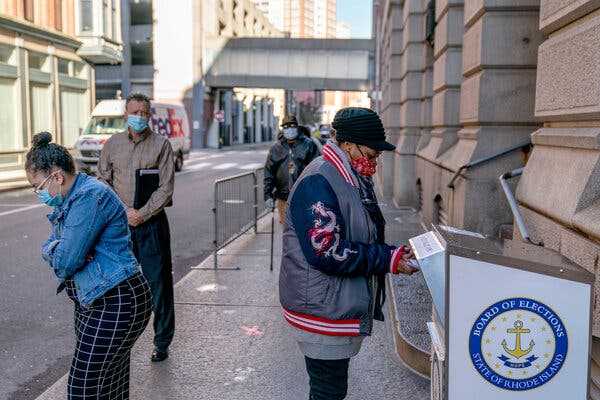 Voters dropped off their ballots in Providence, R.I., during the general election in 2020. The state has a record of counting its votes quickly.

The last votes of the midterm primary season will be cast on Tuesday in Delaware, New Hampshire and Rhode Island, and we have good news for those of you who like sleep: All three states have a track record of counting votes quickly, and while nothing is ever guaranteed in close races, chances are high we’ll know who won on election night.

In Delaware, the polls close at 8 p.m. Eastern time, and unofficial results will be released every 15 to 30 minutes after that, according to Cathleen Hartsky-Carter, a spokeswoman for the Delaware Department of Elections. Officials cannot start tabulating results until the polls close, but they can begin opening, preparing and scanning mail and absentee ballots before Election Day.

Historically, Ms. Hartsky-Carter said, 100 percent of the vote has been counted on Election Day. That should allow the news media and other groups watching results to make relatively quick race calls even in close contests, though the state will not certify the vote counts until two days later.

In New Hampshire, the polls will begin closing at 7 p.m. Eastern, with some open for an additional hour. There is no firm deadline for local election officials to report results, but Anna Fay, a spokeswoman for the New Hampshire secretary of state’s office, said 100 percent of the statewide vote has normally been counted on election night.

In Rhode Island, the polls close at 8 p.m. Eastern, and officials will begin tabulating votes then, though they can start processing mail-in ballots earlier. Typically, about 90 percent of the vote is tallied on Election Day, according to Chris Hunter, a spokesman for the Rhode Island Board of Elections.

That should be enough for organizations that make race calls, like The Associated Press, but the closest contests may take longer. Ballots placed in drop boxes are counted the day after Election Day, Mr. Hunter said, and military and overseas ballots are allowed to arrive up to three days after the election.