The Afghan Fund, which will be based in Switzerland, is meant to help stabilize Afghanistan’s economy and pay for imports like electricity — without benefiting the Taliban. 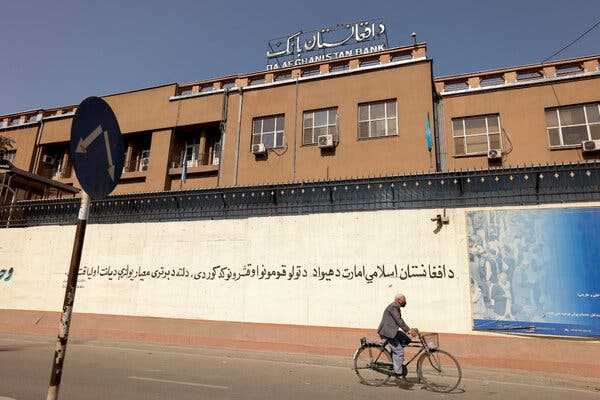 The United States had explored trying to directly recapitalize the Afghan central bank, known as Da Afghanistan Bank, as a component of trying to revive the country’s economy.

WASHINGTON — The Biden administration moved on Wednesday to establish a foundation to begin spending $3.5 billion to benefit Afghans, using funds that President Biden had frozen and seized from Afghanistan’s central bank after the Taliban took over the country last year.

With several international partners, the U.S. government announced the creation of a foundation based in Switzerland that will use the money to help address the unfolding economic and humanitarian crisis in Afghanistan — while keeping the funds out of the hands of the Taliban.

Potential disbursements could include “keeping Afghanistan current on its debt payments to international financial institutions, which would preserve their eligibility for development assistance, and paying for critical imports, such as electricity,” the administration said.

The action was the latest step in a highly unusual dilemma that touches on matters of foreign policy, international finance, counterterrorism and domestic politics. The issues stem from the anomalous situation of a sanctioned terrorist group that has taken over a country by military force but is not recognized as its legitimate government.

When the Afghan government dissolved in August 2021, it left behind about $7 billion in central bank assets on deposit at the Federal Reserve Bank in New York, raising the question of what should happen to them. A group of relatives of victims of the Sept. 11, 2001, terrorist attacks sought to seize the funds to pay off judgment debts from lawsuits that had held the Taliban, among others, responsible for their losses.

But in February, Mr. Biden used emergency powers to freeze the funds from the Afghan central bank, known as Da Afghanistan Bank. Leaving half for the Sept. 11 families to continue pursuing in court, he said that the remaining $3.5 billion would go into a trust fund to help the Afghan people. Many details remained to be worked out.

Wendy Sherman, the deputy secretary of state, said in a statement on Wednesday that the creation of the foundation in Switzerland, known as the Afghan Fund, was a concrete step forward.

It will ensure “that additional resources can be brought to bear to reduce suffering and improve economic stability for the people of Afghanistan while continuing to hold the Taliban accountable,” she said.

Afghanistan’s economy went into a free fall when its government collapsed amid the Taliban’s takeover in August 2021. Financial aid and international spending dried up, in part because the Taliban are a designated terrorist group subject to U.S. and international sanctions that make it a crime to transfer money that could reach them.

The Treasury Department later relaxed some sanctions. Under a so-called general license, people can lawfully transfer money to civil servants in government agencies — including ministries now led by Taliban officials — for transactions like taxes, fees, import duties and the purchase or receipt of permits, licenses or public utility services.

Human rights advocates applauded the creation of the Afghan Fund but said it would not be sufficient to address the country’s economic crisis, which is leading to mass starvation. That, in turn, is creating an enormous and destabilizing wave of refugees.

John Sifton, the Asia advocacy director for Human Rights Watch, called the fund essentially a “‘shadow’ quasi-central bank” situated outside Afghanistan. In a statement, he said many complicated issues had yet to be resolved, including how the fund would interact with the central banks of other countries and the World Bank.

“This is a huge step forward in addressing Afghanistan’s economic crisis, which is a large part of what is driving its devastating humanitarian crisis,” he said. “It is ultimately only a workaround, not a comprehensive solution.”

The United States had explored trying to directly recapitalize the Afghan central bank, or DAB, in trying to revive the country’s economy. But it was unable to figure out a way to do so that would ensure that none of its funds reached the Taliban.

If conditions change in the long term, the government said on Wednesday, any unspent money could someday be returned to DAB.

The slightly more than $7 billion in assets the DAB had deposited at the Federal Reserve Bank in New York included currency, bonds and gold. Much of it came from foreign exchange funds that accumulated over the previous 20 years as the United States and other Western countries were donating large sums to Afghanistan, helping generate economic activity and international exchanges.

Declaring themselves the government of Afghanistan, the Taliban claimed a right to the money. Relatives of victims of the Sept. 11 attacks have argued that the funds were sufficiently linked to the Taliban that they could seize the money as compensation for the their role in hosting Al Qaeda. The families had filed once seemingly symbolic lawsuits against the Taliban, among others, years earlier.

The legal effort to seize the remaining $3.5 billion in frozen DAB funds has stirred controversy.

Some exiled Afghans and a faction of relatives of Sept. 11 victims have argued that the money should instead be used to address the humanitarian crisis in Afghanistan.

Last month, a federal magistrate judge, Sarah Netburn, recommended rejecting the Sept. 11 families’ effort — in part because any declaration that the Taliban have a sufficient interest in the DAB funds, she said, would effectively recognize the Taliban as the legitimate government of Afghanistan.

The recommendation is not a final decision. But if the Sept. 11 relatives ultimately lose their case, it would raise the possibility that Mr. Biden could also direct the remaining half of the Afghan central bank funds in New York to the new Afghan Fund.