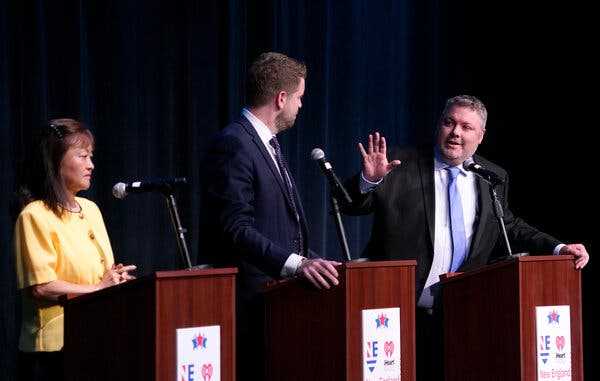 Robert Burns, right, during a debate with George Hansel and Lily Tang Williams in Henniker, N.H. He defeated six other Republicans in the primary.

He defeated six other Republicans, including George Hansel, a more moderate candidate who may have had a better chance of defeating the Democratic incumbent, Representative Ann McLane Kuster, in November. As of midday Wednesday, when the race was called, Mr. Burns was leading by more than 1,500 votes.

The district — which includes the state’s second- and third-largest cities, Nashua and Concord, as well as large rural areas of western and northern New Hampshire — is competitive but leans toward Democrats.

Mr. Burns, a local businessman and former treasurer of Hillsborough County, N.H., campaigned on ending economic reliance on China and on an array of conservative red-meat issues, including opposition to gun control, to pandemic mitigation measures and to the purported teaching of critical race theory.

He won the primary despite raising less than half as much money as Mr. Hansel, according to Federal Election Commission filings.

Mr. Burns may have benefited from more than $90,000 in spending by a Democratic political action committee, the latest example of a risky Democratic strategy to help far-right Republicans win primaries in the hopes that they will be easier to beat in the general election.

But an array of Democratic organizations — outside groups as well as the Democratic Congressional Campaign Committee, the party’s House campaign arm — have run similar ads elsewhere to try to make opponents they view as weaker seem more attractive to conservative primary voters.

Mr. Burns’s main opponent, Mr. Hansel, is the mayor of Keene and was endorsed by Chris Sununu, New Hampshire’s popular Republican governor. Mr. Hansel ran as the sort of moderate Republican who has traditionally done well in New England, allowing the party to retain a modicum of power even in very blue states. But this year’s primaries have shown that Republican voters’ appetite for such candidates has fallen.

Mr. Hansel focused heavily on inflation and described himself as pro-choice — something that could have been an asset in the general election, given the backlash to the overturning of Roe v. Wade, but that was a liability in a Republican primary. Mr. Burns, by contrast, has said he would support federal legislation to ban abortion after cardiac activity is detectable in the embryo or fetus, which is before many women know they are pregnant.

In addition to Mr. Burns and Mr. Hansel, the primary in the Second District included Lily Tang Williams — a libertarian-leaning Republican who made her personal experience as a Chinese immigrant a centerpiece of her campaign — and four lesser-known candidates.