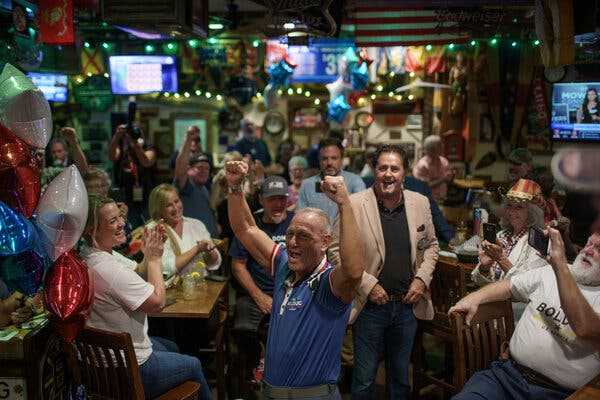 Don Bolduc cheered with supporters during his campaign watch party.

Don Bolduc, a retired Army general and 2020 election denier, appears to have captured the Republican nomination for Senate in New Hampshire after his chief rival conceded early Wednesday.

The Associated Press has not yet called the race. As of 8 a.m., Mr. Bolduc held a lead of about 1,200 votes over Chuck Morse, the president of the State Senate.

Mr. Morse was endorsed by Gov. Chris Sununu and helped by $4.5 million from national Republicans, who were worried that a victory by Mr. Bolduc would forfeit what they saw as a winnable seat in the quest for Senate control this fall.

Mr. Bolduc’s apparent victory will come as a relief to Democrats, who also assume he will be the weaker opponent against Senator Maggie Hassan, a first-term Democrat. She won in 2016 by about 1,000 votes in purple New Hampshire but has been saddled with low job approval numbers. Four states — New Hampshire, Arizona, Georgia and Nevada — have vulnerable Democratic senators the party is aggressively defending to keep its hold on the Senate.

Mr. Bolduc led wire-to-wire in polling during the race. He amassed grass-roots support by traveling widely for two years and holding town hall-style events, where attendees fumed over President Biden and Democratic governance in Washington.

His supporters were less animated by bread-and-butter issues such as inflation — which is soon expected to affect the cost of the home heating oil that is widely used in New Hampshire — than by immigration, the 2020 election and cultural issues. “I signed a letter with 120 other generals and admirals saying that Donald Trump won the election and, damn it, I stand by” it, Mr. Bolduc said at a debate last month. He has also said he was open to abolishing the F.B.I. after agents searched Mr. Trump’s residence in Florida seeking classified documents.

Mr. Sununu, a moderate and popular Republican in the state, was outspoken in calling Mr. Bolduc a “conspiracy-theory extremist” whom most voters did not take seriously.

Mr. Morse, 61, the president of the State Senate, acknowledged that Joseph R. Biden Jr. won in 2020 and said he would have certified the election if he had been in Congress on Jan. 6, 2021.

In debates, Mr. Morse rarely turned his fire on Mr. Bolduc, instead attacking Ms. Hassan. He highlighted how he had led the Legislature to override a budget that Ms. Hassan had vetoed as governor because it included business tax cuts. Ms. Hassan’s campaign has positioned her as breaking with her party on issues of concern to New Hampshirites — pushing for a federal gasoline tax holiday, for example — and standing up to “Big Pharma” to lower prescription drug costs.

Other candidates in the Republican primary included Kevin Smith, a former Londonderry town manager, and Bruce Fenton, a cryptocurrency entrepreneur whose libertarianism — he favored legalizing all drugs — enlivened debates but also drew boos.

Mr. Bolduc’s poor fund-raising meant he wasn’t able to run a single ad on television. A super PAC with ties to national Republicans spent millions of dollars on ads opposing him and boosting Mr. Morse.

A Democratic group also tried to shape the race: The Senate Majority PAC, which is aligned with Senator Chuck Schumer of New York, the majority leader, attacked Mr. Morse in ads as “sleazy” in an effort to drive voters toward Mr. Bolduc, gambling that he would be easier to defeat in November.

For the general election, super PACs tied to Republican leaders in the Senate have reserved $29 million for ads in New Hampshire, which could boost Mr. Bolduc and tarnish Ms. Hassan. But it is unclear whether those commitments will hold with Mr. Bolduc on the ballot.

Left on his own, Mr. Bolduc would enter the contest with Ms. Hassan at a severe disadvantage: He had just $84,000 in his campaign account as of late August, according to federal records. Ms. Hassan had $7.3 million. She has already spent millions on ads this year to boost her image, including one claiming that she is “ranked the most bipartisan senator,” but her approval has stalled in polls around 45 percent.

Still, facing Mr. Bolduc would bump Ms. Hassan, 64, down Democrats’ list of the incumbents they most need to defend to keep control of the Senate and assure that President Biden is not hamstrung in the remainder of his term.

With New Hampshire’s primary elections so late in the year, Mr. Bolduc has just eight weeks before the general election to move beyond appeals to the Republican base and reach out to independents and conservative Democrats, voters who traditionally add to the coalition that Republican candidates need to win statewide in New Hampshire.

Mainstream Republicans in the state have been skeptical that Mr. Bolduc will be able to modulate his image after two years of appealing to the Trump-centric party base.

One reason he led in polls from the outset is that he had a yearlong head start over his rivals. The race was effectively frozen as Mr. Sununu, a top recruiting target of national Republicans to face Ms. Hassan, weighed joining in. It was November by the time he decided to forgo a Senate bid and seek re-election as governor.

One shoe that never dropped was an endorsement from former President Donald J. Trump. Mr. Morse and his supporters waged a campaign to win the former president’s approval, including a visit by Mr. Morse to Mr. Trump at his golf club in Bedminster, N.J., on Sept. 2.

Although the conversations were cordial, according to aides to both men, no endorsement ensued. After their meeting, Mr. Trump invited Mr. Morse and his team to have dinner at his club, but Mr. Trump did not join them.

On the eve of the election, Mr. Sununu — whom Mr. Bolduc once accused of being “a Chinese communist sympathizer” — suggested that if Mr. Bolduc became the nominee, he would endorse him.