Senior Democratic lawmakers said the United States must not give aid to Egypt until it improves its human rights record, in the latest instance of tensions over Middle East policies. 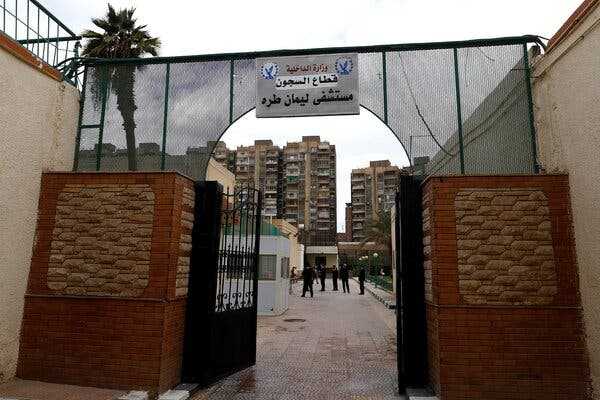 The Tora prison clinic on the southern outskirts of Cairo in 2020.

WASHINGTON — Seven Democratic lawmakers are asking the Biden administration to withhold $300 million of military aid to Egypt until the country improves its human rights record, according to a congressional letter sent to the State Department.

The lawmakers, led by the chairman of the House Foreign Affairs Committee, Representative Gregory W. Meeks of New York, said in the letter that they were concerned “about the ongoing, pervasive and systemic violations of human rights in Egypt that risk destabilizing the country” and noted the many political prisoners, including some U.S. legal permanent residents, who are “subject to abuse and mistreatment such as torture and medical neglect.”

The lawmakers cited the State Department’s 2021 country reports on Egypt as well as articles by The New York Times on human rights abuses in the country. The Times articles described a brutal crackdown on dissent by Egypt’s military-backed president, Abdel Fattah el-Sisi, whose government has exploited the judicial system to hold thousands of political prisoners — including some arrested for offenses as minor as liking an anti-government Facebook post — in harsh and often deadly conditions.

The group urged the State Department to withhold the entire amount of aid that is supposed to be contingent on human rights reforms, which for the coming year is $300 million. U.S. officials say the State Department is expected to decide soon how much of that aid to give to Egypt.

Egypt has been among the top recipients of U.S. foreign aid since it became the first Arab country to make peace with Israel, its neighbor to the east, in 1979, after the U.S.-brokered Camp David Accords.

Egypt usually receives about $1.3 billion in annual aid from the United States and buys billions more in American military equipment each year, though $300 million of the aid comes with strings attached. Earlier this year, the Biden administration blocked $130 million of that portion, saying the country would have to demonstrate more progress on human rights, despite lawmakers’ demands for the full amount to be withheld. (The same week, it also approved $2.5 billion in military sales to Egypt.)

Even with that cut, Egypt remains the third-biggest recipient of American military aid in the world, behind only Ukraine and Israel.

ImageThe lawmakers, led by Representative Gregory W. Meeks of New York, said in a letter that they were concerned about the ongoing human rights violations in Egypt.Credit…Carolyn Kaster/Associated Press

In January, Mr. Meeks and other lawmakers urged the administration to stick to the criteria it laid out for Egypt in September 2021 and to continue withholding the $130 million in aid because Egypt had not substantially improved its human rights situation. Last year’s criteria centered on political prisoners and other rights issues, though they were never made public.

The lawmakers, who are all members of the House Foreign Affairs Committee, sent the latest letter to the State Department on Tuesday and planned to release it publicly on Wednesday. The New York Times obtained a copy of the letter.

Asked at a news conference on Tuesday whether all $300 million would be withheld this year, Ned Price, the State Department spokesman, said the agency would continue to discuss the issue with U.S. lawmakers and Egyptian officials. He said the administration had made it “abundantly clear” to Egypt that an improvement in human rights and civil liberties “would ultimately lead to a stronger and more durable bilateral relationship between the United States and Egypt.”

He added that Egypt was an “indispensable partner” in the region. The United States cooperates with Egypt on Middle East security, including fighting militants in Egypt’s Sinai province, and sees it as an important mediator between Israel and Palestinians in Gaza.

State Department officials who work on human rights issues have advocated in internal discussions to again withhold some or all of the aid to Egypt, said U.S. officials familiar with the debate.

The lawmakers’ push for accountability from Egypt is the latest instance in which members of Congress have urged the Biden administration to take a stronger stand on human rights in authoritarian countries in the Middle East. Members of the Senate and House recently sent separate letters to the State Department and the Pentagon demanding that they report on how U.S.-made weapons have been used by a Saudi-led coalition in the war in Yemen, where many civilians have been killed.

Over the summer, several lawmakers, including senior Democrats, criticized President Biden for agreeing to travel to Saudi Arabia, where he met with Crown Prince Mohammed bin Salman, the kingdom’s young de facto ruler, who has presided over unrelenting domestic repression as well as the war in Yemen. Mr. Biden vowed during the 2020 presidential campaign to treat Saudi Arabia like a “pariah” for the killing of Jamal Khashoggi, a Washington Post columnist, by Saudi agents in 2018. U.S. intelligence agencies concluded that they believed that Prince Mohammed ordered the killing.

Mr. Biden’s affirmation of relations with autocratic rulers in the Middle East is a notable example of his deviation from a stated pillar of his foreign policy: the support of democratic principles and nations abroad.

Senior administration officials talk of the “democracy versus autocracy” paradigm that is central to Mr. Biden’s thinking, and they say the president aims to convene a second Summit for Democracy soon. Scores of nations attended the first conclave last December, but Egypt was not invited.

Advocates of keeping Egypt’s aid warn that slashing the assistance risks ceding influence among Egyptian officials to China and Russia. But those calling for less funding say Egypt usually responds to American concerns when they are paired with the threat of cuts.

“An additional $300 million is not necessary for Egypt’s security, is not necessary for U.S. security, and weakens the credibility of the United States inside Egypt and around the world,” said Seth Binder, the advocacy director for the Project on Middle East Democracy, a group based in Washington. “If the administration is serious about putting human rights at the center of its foreign policy, this decision is easy.”

Edward Wong reported from Washington, and Vivian Yee from Cairo.