The debate, set for 9 p.m. Eastern time, will be the first and likely only one to take place in this closely watched Senate contest. Stay here for updates. 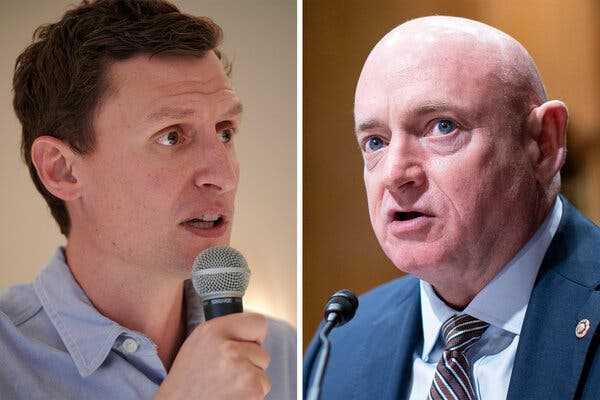 Senator Mark Kelly of Arizona, a Democrat, pictured right, will face his Republican challenger, Blake Masters, on the debate stage.

With Election Day fast approaching, Senator Mark Kelly of Arizona, a Democrat, will face his Republican challenger, Blake Masters, as well as Marc Victor, the Libertarian candidate, in their first and (likely only) debate.

Mr. Masters, a political newcomer who received the enthusiastic backing of the tech mogul Peter Thiel, has struggled to attract independent voters, who make up roughly a third of the state’s registered voters.

Much of Mr. Masters’s campaign has focused on anti-immigration messaging. He has shifted his stance on abortion since the primary and has deleted his false claim that President Donald J. Trump won the 2020 election from his website. He is likely to face questions from the moderators and Mr. Kelly on his shifting positions.

Mr. Kelly, a former astronaut and the husband of Gabby Giffords, the former congresswoman who was shot in the head in 2011, has run a carefully choreographed campaign. He has relied on his reputation as a moderate incumbent, drawing consistent support from some Republicans. Mr. Kelly also has one of the most well-funded Senate campaigns, raising over $52 million.

The debate, hosted by the Arizona Clean Elections Commission, is at 6 p.m. local time (and 9 p.m. Eastern time). It will be aired by C-SPAN and we will be covering it here with live updates and analysis from our reporters.