The decision unlocked a flow of heavy arms from Europe and inched the United States and its NATO allies closer to direct conflict with Russia. 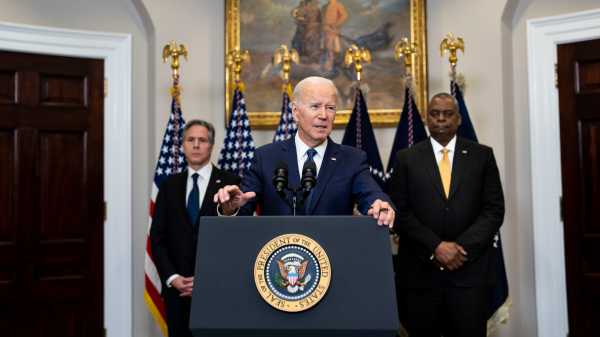 President Biden announced that his administration would arm Ukraine with 31 of the United States’ most advanced tanks.Credit

WASHINGTON — President Biden’s announcement Wednesday that he would send M1 Abrams tanks to Ukraine came after weeks of tense back-channel negotiations with the chancellor of Germany and other European leaders, who insisted that the only way to unlock a flow of heavy European arms was for the United States to send tanks of its own.

His decision, however reluctant, now paves the way for German-made Leopard 2 tanks to be delivered to Ukraine in two or three months, provided by several European nations. While it is unclear whether it will make a decisive difference in the spring offensive that President Volodymyr Zelensky is now planning to take back territory seized by Russia, it is the latest in a series of gradual escalations that has inched the United States and its NATO allies closer to direct conflict with Russia.

In interviews, European and American officials acknowledged that three months ago, it would have been inconceivable that Mr. Biden, Chancellor Olaf Scholz of Germany and leaders of other European nations would have contributed such heavy arms. But over time, they argued, the battlefield has changed and they believed the threat that President Vladimir V. Putin would reach for a tactical nuclear weapon to eviscerate Ukrainian forces has diminished.

Moreover, they said, they wanted to demonstrate to Mr. Putin that his bet that European unity would fracture over the winter had failed, and that NATO remained committed to the war even in the face of gas and oil cutoffs and fears that Russian cyberattacks would cripple European infrastructure.

“Putin expected Europe and the United States to weaken our resolve,” Mr. Biden said at the White House, flanked by Secretary of State Antony J. Blinken and his defense secretary, Lloyd J. Austin III. He added, “These tanks are further evidence of our enduring, unflagging commitment to Ukraine and our confidence in the skill of Ukrainian forces.”

Only last week, Mr. Austin dismissed the idea of sending the Abrams tank, with his aides saying its long tail of supply and repair vehicles was too complex for the stretched Ukrainian forces to operate.

The No. 3 official in the Pentagon, Colin H. Kahl, said last week that “The Abrams tank is a very complicated piece of equipment,” adding, “we should not be providing the Ukrainians systems they can’t repair, they can’t sustain, and that they, over the long term, can’t afford, because it’s not helpful.”

But by promising Abrams tanks — which John F. Kirby, the National Security Council spokesman, said would take “many months” to be built by General Dynamics — Mr. Biden was able to give Mr. Scholz political cover to send Leopard tanks by early spring. And Germany’s decision opened the way for Spain, Poland and Finland to do the same, with Norway likely next to announce a similar contribution.

But Mr. Biden was clearly sensitive to the suggestion that he had been forced into the decision by one of his closest allies. He cast the issue as one of preserving unity. “We wanted to make sure we were all together,” Mr. Biden said.

The European Leopards, though they come in many versions that use different types of ammunition, are considered lighter and more agile than the Abrams tanks and better suited to the coming counteroffensive. That will require Ukrainian forces to breach lines of Russian-dug trenches, a situation more akin to World War I battlefields in Europe — for which the tank was invented. 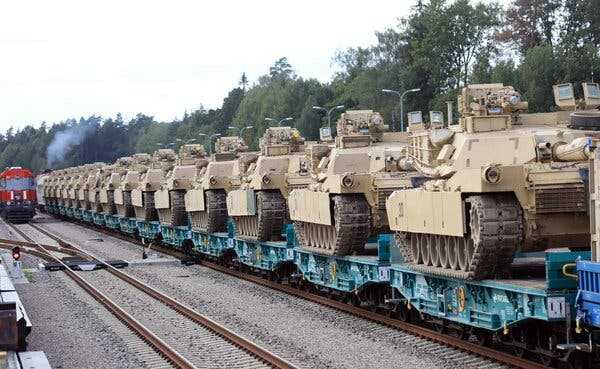 Mr. Biden often says he has two goals: to liberate Ukraine and to avoid direct conflict between American and Russian forces. Increasingly, those two goals are in tension. On Wednesday, Mr. Biden insisted that the new firepower was intended to defend Ukrainian territory, and nothing more.

“There is no offensive threat to Russia,” he said. “If Russian troops return to Russia, where they belong, this war would be over today.”

The Russians viewed it differently, to no one’s surprise. The Russian ambassador to the United States, Anatoly Antonov, spent much of the day on social media suggesting a broader American plot, saying “it is all about U.S. ‘proxy-war’ with our country.”

Both Mr. Biden and Mr. Scholz were worried about the proxy-war imagery, though for different reasons. Mr. Biden worries about escalation; in private conversations, Mr. Scholz made the case that even eight decades after World War II, European nations would be uncomfortable seeing German tanks rumbling into battle — even in the cause of liberating Ukrainian territory.

After a call last week with Mr. Scholz, who is still finding his footing as the leader of Western Europe’s biggest power, Mr. Biden began to relent. He told the Pentagon to set aside its many objections that the Abrams tank was ill suited to Ukraine’s needs, and far too hard to operate and maintain for its stressed forces.

It was a triumph of political calculation over logistical concerns. It made no sense to the Pentagon to go through the logistical headaches of sending the country’s most advanced tanks to Ukraine when there were very capable German Leopard tanks nearby that could get to Ukraine faster, and operate more efficiently.

On top of that, several European countries, including Spain, Poland and Finland, were willing to send their German Leopard tanks if Germany would only agree — a legal requirement that came with their original acquisition of their German-made equipment.

In senior Biden administration meetings, Mr. Austin and Gen. Mark A. Milley, chairman of the Joint Chiefs of Staff, laid out the Pentagon position. In subsequent interviews, White House national security officials dutifully repeated the military talking points about why the Abrams did not make sense, while European tanks did.

But Mr. Austin and General Milley are charged with giving Mr. Biden their best military advice; in this case it clashed with the need to preserve unity among the allies. What the Pentagon was not taking into enough account, one official said, was the intense fear among European governments of doing anything to provoke Russia without having the cover of the United States doing the same thing first.

“Like it or not, that means the United States remains the glue that holds NATO and Europe together,” said Peter Juul, a national security analyst in the newsletter The Liberal Patriot.

At the World Economic Forum in Davos, Switzerland, last week, Mr. Scholz was clear, according to several people who heard him, that he would not agree to send Leopard tanks until the United States agreed to send its Abrams. American officials at first thought he could be persuaded otherwise, and hoped that a commitment by Britain to send Challenger 2 tanks — which have different operational requirements — would move him to do the same.

It did not, as German officials made clear to Mr. Austin and General Milley during a meeting on Friday of more than 50 allies at Ramstein Air Base in Germany.

After the meeting failed to produce Germany’s approval to deploy its tanks, the ensuing media reports pointed to the division as the biggest crack in NATO unity since the start of the Ukraine War.

Some European officials argue that the split was overblown, and that the tanks are less likely to provide a game-changing difference in the coming offensives. Missile defenses and precision-guided rockets, like the HIMARS system the United States has sent to Ukraine, are more effective, they argue.

But as often happens, the tanks — a weapon easy for anyone to understand, resonant of wars past — became a litmus test. And after a year of using NATO unity as one of the Biden administration’s key talking points about Russian failures in the war in Ukraine, senior administration officials realized that it was time for politics to trump the Pentagon’s objections.

ImageChancellor Olaf Scholz of Germany said, according to several people who heard him, that he would not agree to send Leopard 2 tanks until the United States agreed to send its Abrams. Credit…Ronny Hartmann/Agence France-Presse — Getty Images

“It seems that the issue all along has been a political, not military one, said Evelyn Farkas, the Pentagon’s senior official for Ukraine in the Obama administration. “And our military leaders should have greenlighted the Abrams long ago to provide reinforcement to the Germans that collective security would prevail.”

“What is stunning about it is how afraid our allies are about facing Russia without the United States,” she added.

Mr. Austin himself arrived at that conclusion after the meeting in Germany ended without a decision on the German tanks, according to aides, telling associates that he did not see the sense of risking a “fracture” in NATO or a rift with Germany over the issue.

Some Pentagon officials were taken aback that German officials were publicly admitting the link between the Abrams tanks and the Leopards, one official said, speaking on condition of anonymity to discuss internal deliberations. He added that officials thought those communications would only be internal.

By Monday, officials said both Mr. Austin and General Milley were onboard with sending American tanks to Germany. To make the point — or to be seen making the point — Mr. Austin called Mr. Biden on Monday to recommend sending the Abrams tanks.

While some lawmakers had suggested the United States needed to send as few as a single Abrams tank to unlock the German Leopards, the Pentagon leaders said that made no sense. If the United States was going to send its most advanced tank system, it should send a battalion with “combat power,” one official said.

A Ukrainian battalion has 31 tanks, so that was the amount the United States agreed to send, Pentagon officials said.

Several details still need to be worked out. Pentagon and other administration officials said the tanks would not come out of U.S. Army stockpiles, but instead will be manufactured in a special order with General Dynamics — a process officials said would take months, if not longer.

That will give the U.S. military time to train Ukrainian soldiers how to operate and maintain the Abrams tanks. It was unclear whether training would take place in Germany, the United States or both, Pentagon officials said on Wednesday.