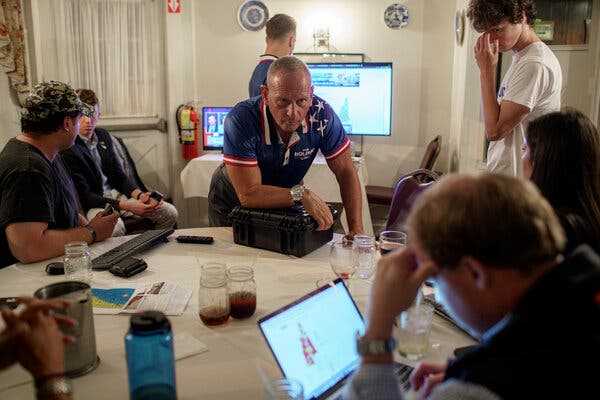 Don Bolduc with his campaign staff during his primary night watch party. After his primary, he changed his mind on the 2020 election results he had long questioned.

As post-primary pivots go, Don Bolduc’s overnight transformation from “Stop the Steal” evangelist to ratify-the-results convert could land him in a political hall of fame. It was an about-face so sudden and jarring that it undermined the tell-it-like-it-is authenticity with which he’d earned the Republican nomination for Senate from New Hampshire.

But Mr. Bolduc was hardly the only Republican candidate to edge away from his public insistence, despite a lack of evidence, that the 2020 election was stolen from former President Donald J. Trump, or that 2020 had undermined the integrity of American elections.

Blake Masters in Arizona, Tiffany Smiley in Washington State and Dr. Mehmet Oz in Pennsylvania have all made pivots — some artfully, some not — as the ardent, Trump-loyal voters who decided the Republican primaries shrink in the rearview mirror, and a more cautious, broader November electorate comes into view. These three Senate candidates haven’t quite renounced their questioning of the 2020 election — to right-wing audiences of podcasts, radio shows and Fox News, they still signal their skepticism — but they have shifted their appeals to the swing voters they need to win on Nov. 8.

The real question now is: Can they get away with it?

“I can tell you generally that candidates who do a 180-degree reversal in the middle of a campaign have to have a thought-out, strategic reason for doing so,” said Dave Carney, a New Hampshire Republican consultant who backed Mr. Bolduc’s primary opponent, Chuck Morse, but now supports Mr. Bolduc. “The pain has to be worth it,” he added.

In some sense, the contortions are about having it both ways: signaling to undecided swing voters that a candidate is willing to move toward the middle, while winking at the right-wing base.

After his primary victory in the Arizona Senate race, Mr. Masters, who was Mr. Trump’s pick to take on Senator Mark Kelly, a Democrat, removed language from his campaign website that falsely claimed the 2020 election had been stolen. “If we had had a free and fair election, President Trump would be sitting in the Oval Office today,” the website had unambiguously proclaimed.

ImageBlake Masters removed language from his campaign website that falsely claimed the 2020 election had been stolen.Credit…Rebecca Noble for The New York Times

Despite that erasure, however, Masters campaign aides said this week that while the website may have changed, the candidate’s views had not, and pointed to comments Mr. Masters made to an Arizona radio station earlier this month. “I still believe the election was not free and not fair,” he said then. “I think if everybody followed the rules and the law as written, President Trump would be in the Oval Office.”

Similarly, Dr. Oz has obscured his views more than changed them. After saying in April that “we cannot move on” from the 2020 election, Dr. Oz told reporters this month that he “would not have objected to” affirming President Biden’s election had he been in the Senate on Jan. 6, 2021.

“By the time the delegates and those reports are sent to the U.S. Senate, our job was to approve it. That’s what I would have done,” he said.

Later that day, however, on the Fox News Channel, Dr. Oz answered a viewer’s question about whether the election was stolen by saying, “There’s lots more information we have to gather in order to determine that, and I’d be very desirous of gathering some.”

Ms. Smiley, the Republican Senate nominee in Washington, dropped “election integrity” from a remade website after her primary victory, and with it, the statement that “the 2020 elections raised serious questions about the integrity of our elections.”

Still, in a recent appearance on CNN, Ms. Smiley used a coded “he is our president” answer repeatedly when she was asked if Mr. Biden had been legitimately elected — language other Republicans have used to obscure whether they believe the outcome of the 2020 voting was accurate, while still affirming that Mr. Biden is indeed the president.

“The campaign’s position has not changed on this issue,” said a Smiley campaign spokeswoman, Elisa Carlson. “Tiffany has long said that it should be easy to vote and hard to cheat — a position that is still reflected on our website.”

The Bolduc and Oz campaigns did not respond to requests for comment.

Mr. Bolduc’s problem has been his complete lack of subtlety or coded messaging, said Fergus Cullen, a former chairman of the New Hampshire Republican State Committee who is now a city councilor in Dover.

At a Republican debate just before the Sept. 13 primary, Mr. Bolduc, a retired brigadier general in the Army, declared unequivocally, “I signed a letter with 120 other generals and admirals saying that Trump won the election, and, damn it, I stand by my letter.” He added for good measure, “I’m not switching horses, baby. This is it.”

His nomination clinched, Mr. Bolduc on Sept. 15 left that horse in a ditch. “I’ve done a lot of research on this,” he said on Fox News after being shown a clip of his promise to stay the course on election denial, “and I’ve spent the past couple weeks talking to Granite Staters all over the state from every party, and I have come to the conclusion — and I want to be definitive on this — the election was not stolen.”

When a flabbergasted Fox host, Dana Perino, pointed to Mr. Bolduc’s adamant statements before the primary, he shrugged: “You know, live and learn, right?”

General-election turns to the center are nothing new, but few would say Mr. Bolduc, a political newcomer whose authenticity was his calling card, executed his smoothly.

“Don spent the last three years hanging with primary voters, a third to a half who bought into the whole stolen-election thing, or at least thought something was fishy,” Mr. Cullen said. “When you spend that much time around people who feel that way, it’s easy to think everybody felt that way.”

Then he won the primary and realized that it just wasn’t so, Mr. Cullen added.

Mr. Bolduc’s post-primary switcheroo created a new problem: Even as he sought to court a general-election electorate, he now also needed to mend fences with his base. Supporters posted a Facebook message that they said Mr. Bolduc had sent them in which he explained his shift. Yes, he wrote with no evidence, election fraud in 2020 was rife — in mail-in ballots, voting machines and drop-box stuffing. But, he added: “Was Biden put into the presidency through a constitutional process … yes.”

Mr. Bolduc’s Democratic opponent, Senator Maggie Hassan, has stuck largely to a campaign centered on abortion rights, and recently hit Mr. Bolduc on comments he made in August seemingly backing the privatization of Medicare. But she has used his flip-flop on election denial to say Mr. Bolduc “is trying to mislead Granite Staters and really hide his extreme record.”

ImageDr. Mehmet Oz told reporters this month that he “would not have objected to” affirming President Biden’s election had he been in the Senate on Jan. 6, 2021.Credit…Hannah Beier for The New York Times

Dr. Oz had an easier task, said G. Terry Madonna, a longtime Pennsylvania political analyst and pollster, now at Millersville University. Though Dr. Oz was endorsed by Mr. Trump and stood by the former president as he spouted lies about the 2020 election, Dr. Oz’s own statements on election fraud were vague. Now, he may be making headway with swing voters to close the gap with his Democratic opponent, Lt. Gov. John Fetterman.

Moreover, Mr. Fetterman has so far shied away from attacking Dr. Oz on his affiliation with Mr. Trump, said Berwood A. Yost, director of the Center for Politics and Public Affairs at Franklin & Marshall College, because Mr. Fetterman believes he can win over Trump voters in the state’s small towns and rural stretches. Attacks on the man they still love may not help Mr. Fetterman make that sale.

“Trump attacks are not part of Fetterman’s campaign,” Mr. Yost said. “He’s trying to appeal to Trump supporters with ‘I look like you, I sound like you, and I’m running against Washington, too.’”

That has allowed Dr. Oz to tack to the center to try to win over voters in the “collar counties” around Philadelphia.

But Mr. Fetterman’s aides note that Dr. Oz has not locked up the core Republican vote the way the Trump-aligned State Senator Doug Mastriano has in the Pennsylvania governor’s race.

What Dr. Oz is showing in appealing to moderate voters in the general election, they contend, is not so much a pivot as a forked tongue.