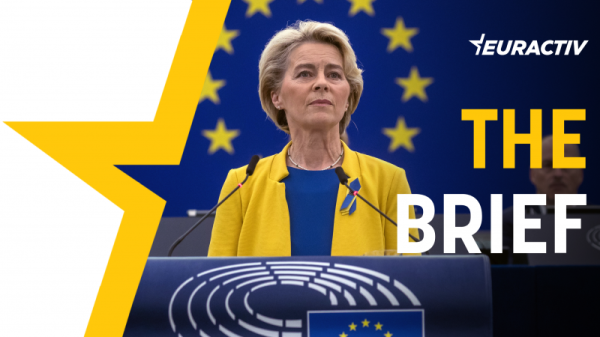 Set-piece speeches are the political equivalent of eating a packet of biscuits in one sitting: It feels good at the time, but you feel hungry and bloated an hour later. Ursula von der Leyen’s Wednesday State of the Union speech was a case in point.

It was not bad, as such, but this was a speech that had promised much and delivered relatively little.

With Europe facing significant energy and cost of living crises, not to mention the more existential threats posed by a war on its eastern border, this was a missed opportunity for those searching for a display of ambitious and decisive EU leadership to help them through the challenging year ahead.

Critics will point to what the Commission president did not mention: digital policy, European defence, food security, the latter two being particularly glaring omissions considering their importance in the wake of the Ukraine war.

But the lack of ambition or detail on the commitments she did make is just as concerning.

Von der Leyen referred to “a watershed moment in global politics”, mentioning the need to increase the pace of enlargement for the Western Balkans and eastern partnership countries, and giving her support for a European Political Community, the brainchild of French President Emmanuel Macron.

But there was no mention of the next steps toward these aims.

Defence policy or how to improve the functioning of EU foreign policy, both vital to von der Leyen’s promise of ‘a geopolitical Commission’, were not mentioned.

Similarly, while she supported a European Convention that would reform the treaties, von der Leyen offered no idea or detail on what that might entail beyond a vague call for “solidarity between generations” as a principle to be enshrined.

Again, that is all very well and good, but if that is the extent of her ambitions on EU reform, then we may as well not bother. Perhaps von der Leyen calculates that the dozen or so national governments that oppose treaty change need to be won over gently.

Similarly, the follow-up to the 49 recommendations made by the much-talked-about but now largely forgotten Conference on the Future of Europe was boiled down to an initiative on mental health.

Worthy enough, and important considering that Europe faces its own mental health pandemic following COVID-19, but health policy is almost exclusively a national competence. It is hard to see what the Commission could usefully propose to do.

Journalists and think-tankers pore over leaders’ speeches, but in the real world, few people outside Washington DC remember a US president’s State of the Union. The same is very much true in Brussels.

In normal times, that should not matter. But Ursula von der Leyen’s flatness and lack of ambition, shown as millions of Europeans prepare to struggle to pay for their food and heating, should concern people outside the Brussels bubble.

This was a missed opportunity.

Today’s edition is powered by Salesforce

Strategic focus and external factors such as the COVID crisis have accelerated the digital transformation of the European Commission (EC).

To learn more about the EC digital transformation journey and the important role of platforms, read this report:

Even as President von der Leyen lauded Europe’s strong response to Russia’s invasion of Ukraine, the Commission has stepped back from earlier plans to cap the price of Russian gas, proposing instead to set up a new task force that will attempt to negotiate with key suppliers.

The European Parliament has voted to extend the agricultural goods covered by the bloc’s new law against imports linked to deforestation to include maize, poultry and pig meat.

Italy supports a full ban on targeted advertising based on the tracking of users, but France seems to be on the fence on several key elements of the proposed regulation on political advertising.

Meanwhile, the Commission scored a major victory in court on Wednesday as Europe’s largest ever competition sanction, levied against Google, was upheld with only a slight reduction.

The EU executive will next year present an initiative on the metaverse, the latest virtual reality space for users to interact, it announced on Wednesday.

The European Commission on Wednesday put forward a proposal to ban all products made with forced labour from entering the bloc’s market or being exported to third countries.

All countries of the World Health Organisaion European Region currently face severe challenges related to the health and care workforce (HCWF), with mental health issues and ageing causing the most concern.