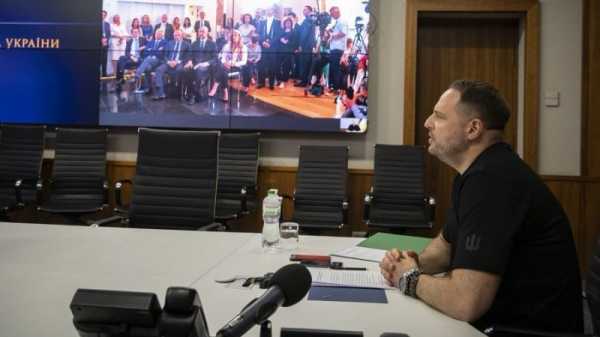 Ukraine’s government on Monday (5 September) sought political backing in Brussels for the creation of a special tribunal to prosecute Russian military and political leaders it holds responsible for starting the war.

Several Ukrainian leaders attending a conference on war crimes accountability in the European capital argued for a court dedicated to prosecuting high-level Russian perpetrators, in addition to the International Criminal Court.

The Hague-based ICC launched its own investigation into alleged crimes against humanity and war crimes days after Moscow’s 24 February invasion, but it does not have jurisdiction to prosecute aggression in Ukraine.

“Ukraine has been working (…) for the creation of an international special tribunal which will try all the top leaders of the Russian Federation for the military aggression against our state,” said Andriy Yermak, head of Cabinet for Ukraine’s President Volodymyr Zelenskyy.

Together with the President of the European Parliament @RobertaMetsola called for support creation of an international tribunal to try the Russian political leadership. pic.twitter.com/cEQ5yw91AA

It was unclear where such a tribunal would be located, but Yermak proposed that it be a treaty-based body which would make it possible to try suspects in absentia. They could then be detained if they visited a country that has signed.

Moscow has rejected allegations by Kyiv and Western nations of war crimes. The Kremlin has said it launched a “special military operation” to demilitarise its neighbour.

Roberta Metsola, president of the European Parliament, said on Monday the legislative body “will continue to be one of the biggest supporters for setting up a special international tribunal” to hold Russian President Vladimir Putin, Belarusian President Alexander Lukashenko and other leaders accountable.

Touched by truly heartbreaking images of Russian war crimes, at the 🇺🇦 Civil Society [email protected]_EN will not turn a blind eye to these horrific acts. War criminals will be brought to justice.

Ukraine’s newly appointed prosecutor general, Andriy Kostin, said “the ICC cannot investigate this crime due to legal constraints, however we cannot leave it go unpunished. Therefore the creation of a special international tribunal … is a central issue for Ukraine.”

An act of aggression is defined by the United Nations as the “invasion or attack by the armed forces of a state of the territory of another state, or any military occupation …”

Despite the crime’s recognition under international law there is currently no specific court or tribunal to which Ukraine can turn.