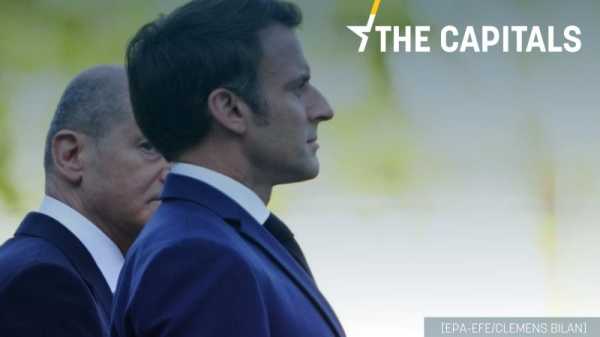 The Capitals brings you the latest news from across Europe through on-the-ground reporting by EURACTIV’s media network. You can subscribe to the newsletter here.

How should the ECB manage inflation? By supercharging a clean energy transition.

While the European Central Bank struggles to get a lid on inflation and the European Union strives to cut its Russian gas dependency, Reclaim Finance launches a new report analysing climate-related inflations and providing recommendations for the ECB to achieve price stability by supporting the EU clean energy transition.

Good morning from Berlin and Paris

While pressure on the German government mounts to increase its military support and deliver modern tanks to Ukraine, neighbouring France has been left largely unchallenged for its own hesitancy.

Besides differences in domestic political pressure, experts and politicians turning a blind eye for France despite its relatively lacklustre support has less to do with the administration in Paris and more with Berlin’s recent foreign policy u-turn. Read more.

Series of sexual violence scandals erupt within French left. A series of recent revelations against left-wing MPs from different parties raise concerns that appropriate frameworks to deal with the complaints are lacking, activists say, while disagreements on how to move forward among political leaders grow. Read more.

First nuclear reactor to be shut down in Belgium. According to the Belgian law on nuclear phase-out, the Doel 3 nuclear reactor will stop operating on Friday after 40 years of activity. Read more.

Dutch to host AI international summit in 2023. The Netherlands will host an international summit on the responsible application of artificial intelligence in the military domain, Foreign Affairs Minister Wopke Hoekstra announced at the UN General Assembly in New York. Read more.

Fracking to return as UK seeks short-term alternatives on gas supply. Fracking for gas will be part of the UK’s short-term response to the energy crisis prompted by Russia’s invasion of Ukraine, ministers announced on Thursday. Read more.

Spain mulls 2023 tax on large fortunes amid ‘tax battle’. The government is working on a temporary tax on large fortunes to be implemented as of January 2023, announced Spanish Finance Minister María Jesús Montero (PSOE/S&D) on Thursday after centre-right opposition Partido Popular (PP/EPP) had launched a series of tax reductions in regions ruled by them. Read more.

Portuguese government still believes France can be convinced about gas link. The government believes it could still be possible to convince France to allow interconnections from the Iberian Peninsula to supply gas, and later hydrogen, to Europe but is also looking into an alternative connection through Italy. Read more.

New laws open door for Slovak nationalisation of gas, and electricity. Further measures will enable the government to nationalise energy produced by companies and declare a state of emergency in case of shortages, unaffordable increases, or threatened security. Read more.

Deserting Russians will not get Czech visas. Russians leaving their country for fear of being subject to mobilisation do not fulfil the conditions for being granted a humanitarian visa in Czechia, Foreign Minister Jan Lipavský said on Thursday. Read more.

Bulgarians consider high prices as more dangerous than the Ukraine war. Bulgarians believe the excessive increase in prices is a more tangible danger than the escalation of the war in Ukraine, according to a Gallup International Poll released on Tuesday. Read more.

Croatian president moves to sack military intelligence chief. A procedure for the dismissal of major general Ivica Kinder, the head of the country’s military intelligence VSOA, was launched by Croatian President Zoran Milanović on Thursday because of what the media said was alleged embezzlement of funds by VSOA members. Read more.