The group, the States Project, aims to help Democrats in Arizona, Pennsylvania, Michigan, Maine and Nevada, as the left tries to make up lost ground in state legislatures. 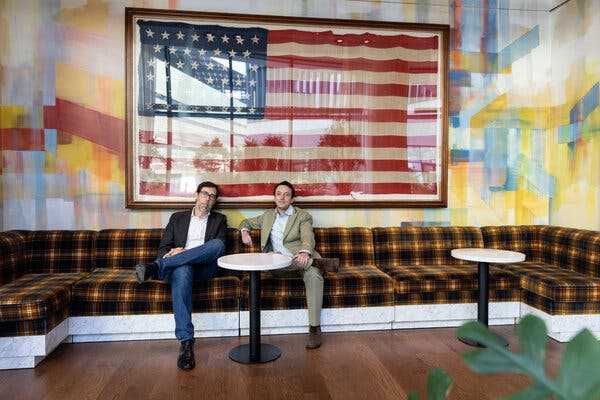 A Democratic-aligned group is investing nearly $60 million in state legislative races in five states, a significant sum in an often overlooked political arena where Democrats have struggled for decades.

The group, the States Project, said it was focusing on flipping a single seat in the Arizona State Senate that could swing it to Democratic control, and on winning back both chambers of the Michigan and Pennsylvania legislatures. The group also aims to defend Democratic majorities in Maine and Nevada.

The large infusion of cash from the States Project amounts to a recognition of the critical role that state legislatures play in American politics, orchestrating policy on abortion access, what can be taught in schools and other issues that animate voters. In every state except Minnesota, Virginia and Alaska, a single party controls both chambers.

“The alarm bells are ringing in our state legislatures,” said Adam Pritzker, a founder of the States Project and a Democratic donor. “With the rise of the Tea Party and the balance of power dramatically shifting toward the right, the rest of us have been asleep at the wheel for too long at the state level. And now, this threat is truly off the charts.”

The $60 million investment represents all of the States Project’s spending for the 2022 election cycle. The group estimates that it has already contributed about half of the money to candidates and legislative caucuses.

While Democrats have historically been outgunned by Republicans at the state legislative level, in part because of gerrymandered districts created after the Tea Party wave of 2010, they have ramped up their spending over the past few years and are coming closer to parity this year.

Nonetheless, the Republican State Leadership Committee has sounded the alarm about falling behind Democrats financially in state legislative races.

“The truth is, we have been outspent in every recent election cycle, and we know full well that we will be again this year,” Dee Duncan, the president of the Republican committee, said in a memo to donors on Wednesday.

Though the group has not released its third-quarter fund-raising numbers, it announced a record second-quarter haul of more than $53 million in July. But the Republican committee also supports candidates for secretary of state and lieutenant governor, in addition to state legislative contenders.

Frustration has sometimes boiled over from outside groups like the States Project that want more out of the Democratic National Committee.

The Democratic Legislative Campaign Committee, the arm of the Democratic National Committee that focuses on state legislative races, announced in July that it had raised $6.75 million, a record for the group, but still below what the States Project has been able to raise. A spokeswoman for the Democratic committee said that the group planned to spend roughly $50 million this cycle, but that it had not announced its third-quarter fund-raising.

Mr. Pritzker, the States Project co-founder, said that “the national party in D.C. has always overlooked and underfunded legislatures,” adding: “If you need an example, the D.N.C. hasn’t given the D.L.C.C. a single dollar to this cycle. And that needs to change.”

“This is definitely not a mission-accomplished message,” Mr. Pritzker said of his group’s new investment. “We’re pretty late to the game.”

The Democratic National Committee did not respond to a request for comment.

Daniel Squadron, a former Democratic state senator from New York and another founder of the States Project, said that while some of the money would be spent on television and digital ads, the vast majority would be sent directly to candidates and Democratic legislative caucuses. They could then coordinate their spending based on their state’s campaign finance laws.

“The top issue in state legislative races is a local issue in each district,” Mr. Squadron said. “So we started giving directly to the candidates and caucuses working in districts themselves. One thing that does is that gets them off the phones, out of the darkened rooms and into the districts to go meet their constituents.”

Joanna E. McClinton, the Democratic leader in the Pennsylvania House of Representatives, said the States Project had helped many of the party’s candidates in the state with training on messaging, and with an incentive program that unlocks more funding per candidate based on doors knocked.

But the biggest accomplishment, Ms. McClinton said, was simply pulling even with Republicans who have controlled the state’s legislature for over a decade.

“Because they have been in power for so long, they’re able to outpace us in so many ways, particularly around fund-raising,” she said.

In Michigan, where Republicans control both chambers, the State Senate is considered a tossup for the first time in decades after an independent commission drew new legislative districts that reduced Republicans’ advantage. Since July, Democrats have spent more than $17 million on state legislative races in the state, far more than the roughly $3 million Republicans have spent, according to AdImpact.

For the States Project, the central goal and biggest challenge is breaking through to voters on the issues of democracy and independent state legislature theory.

“That state legislatures would be handed this power in presidential elections seems fantastical because it’s absurd,” Mr. Squadron said. “The fact that it may be what the Supreme Court says does strain credibility. It unfortunately happens to be true.”