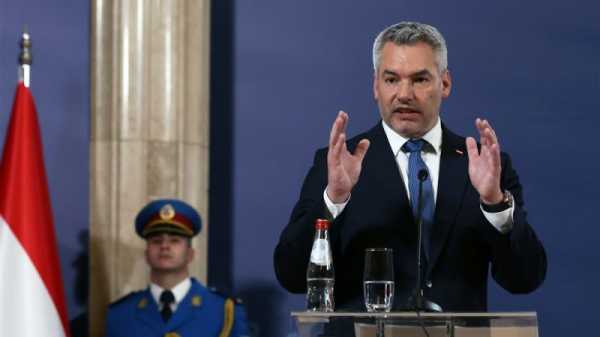 Chancellor Karl Nehammer expressed his support for Croatia’s accession to the Schengen area, a club of mostly EU countries without border controls, an invitation not extended to Bulgaria or Romania.

The Schengen area was founded in 1985 and extended to 26 countries to date. The European Commission proposed to include Croatia, Romania and Bulgaria. Austria, where the conservative ÖVP is on a renewed anti-migration crusade, has voiced scepticism regarding their accession.

“We will support Croatia’s path into the Schengen area,” Nehammer explained in Zagreb on Wednesday, on the occasion of 30 years of bilateral relations between the two countries. “Countries are voted on individually,” he stressed on Tuesday.

“Border protection of the Croatian border always means that of the Austrian border as well,” he added, lauding cooperation with Croatia. However, a new route of migrants from Turkey to Bulgaria to Romania to Hungary to Austria, used by 40% of refugees, meant that something was amiss, he added.

For comparison, Austria registered 100,000 non-Ukrainian refugees in 2022, Hungary about 3000 – something Nehammer seeks to address by forming an anti-migration pact with Hungary and Serbia.

Neither Bulgaria nor Romania is likely to receive support from Vienna. Romania’s Interior Minister Lucian Bode is set to travel to Vienna to address Austria’s concerns and demonstrate that the Schengen area would become “de facto” more secure following Romania’s accession to the borderless zone.

Meanwhile, Croatian Prime Minister Andrej Plenković said he had used the meeting with Nehammer to “provide further clarifications… in a wider context facing Austria today, which concerns a spike in the number of asylum seekers in Austria and a general rise in illegal migration”.

“We are very aware of the chancellor’s and the Austrian government’s concerns,” Plenković said. He did not mention Bulgaria and Romania and focused on the bilateral aspect of the meeting, stressing the strong business ties between the two countries.

“Austria is the second biggest investor in Croatia and one of our top five trade partners. We are talking about two of the four biggest banks, media corporations, big construction firms… And more than 1.5 million Austrian tourists visited Croatia this year. That shows how strong our ties are.”