A Belgian financial messaging service is once again at the center of an international sanctions fight. 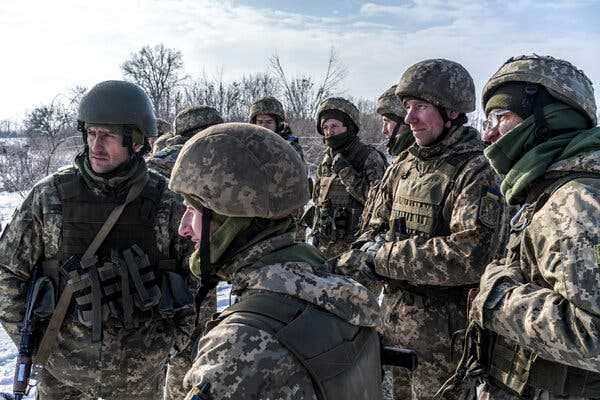 Members of the Ukrainian Army at a training site in Volnovakha, Ukraine. The United States could levy sanctions against Russia if it invades Ukraine.

WASHINGTON — President Biden has pledged that if Russia invades Ukraine it will face “severe economic consequences,” with the United States likely to unleash a blistering package of sanctions that would effectively cut the Russian economy off from much of the global financial system.

The United States has become increasingly reliant on sanctions in the last decade as a way to address diplomatic problems, but directing such tools at an economy the size of Russia’s would come with little precedent. The Biden administration has said that all options remain on the table, suggesting that it could impose an array of sanctions on Russian financial institutions and new restrictions on the exports of American products. But the biggest question among sanctions experts when it comes to inflicting economic pain on Russia is the fate of a critical financial conduit: Swift.

In sanctions circles, a move by the United States and its European allies to cut Russia off from Swift has been characterized as a nuclear option. However, doing so is not as simple as it sounds and could yield unintended consequences because of Russia’s size and position in the world economy.

“The Russian economy is a different beast,” said Adam M. Smith, who served as a senior sanctions official in the Obama administration’s Treasury Department. “It is twice the size of any economy the U.S. has ever sanctioned.”

A Treasury Department spokeswoman said the Biden administration was assessing potential “spillovers” from any sanctions it imposes on Russia and exploring ways to reduce any unintended negative effects. Last week, Biden administration officials met with representatives from U.S. banks to discuss the risks and potential market impacts of sanctions on Russia, including the possible ramifications of cutting off Swift access for entities that had been hit with sanctions.

Understand Russia’s Relationship With the West

The tension between the regions is growing and Russian President Vladimir Putin is increasingly willing to take geopolitical risks and assert his demands.

Officially the Society for Worldwide Interbank Financial Telecommunications, Swift is a Belgian messaging service that connects more than 11,000 financial institutions as they transfer money around the world. It does not actually hold or transfer funds, but allows banks and other financial firms to alert one another of transactions that are about to take place.

Swift is a global cooperative of financial institutions that is based in Belgium. It started in 1973 when 239 banks from 15 countries came together to figure out how to best handle cross-border payments.

Despite its best efforts to be an apolitical cog in the international financial system, Swift has at times found itself embroiled in diplomatic disputes.

Can Russia be booted from Swift?

There have been continuing discussions between the United States and its allies in Europe over whether to block Russia’s access to Swift. However, the Biden administration could take that step unilaterally.

If the United States decided to levy sanctions on Russian banks, it could then say that Swift was in violation of those sanctions by continuing to let those banks use its system. The Defending Ukraine Sovereignty Act of 2022 that Senate Democrats unveiled this month would authorize sanctions on providers of specialized financial messaging services, such as Swift, but the Biden administration could also impose such sanctions without the approval of Congress.

Cutting a country’s access to Swift is not without precedent.

In 2012, Swift expelled as many as 30 Iranian financial institutions, including its central bank, in order to comply with European Union sanctions that were enacted in response to Iran’s disputed nuclear energy program. Services were reconnected after the 2015 nuclear deal, and then cut again in 2018 after the Trump administration withdrew from the pact and resumed sanctions.

How would Russia respond to being removed?

Russia has faced such threats before. In 2014, when Russia invaded and annexed Crimea, there were calls in Europe to exclude Russia from Swift. Dmitri A. Medvedev, then Russia’s prime minister, said at the time that such a move would be a “declaration of war.” According to the Carnegie Moscow Center, Russian forecasts at the time projected that being cut off from Swift would shrink the country’s gross domestic product by 5 percent.

Last week, Nikolay Zhuravlev, the vice speaker of Russia’s Federation Council, told the government-run news agency TASS that removing Russia from Swift would also have economic consequences for European countries, which he said would not be able to receive imports of Russian oil, gas and metals as a result of Russia being unable to receive foreign currency.

Mr. Smith, the former Treasury official, said the United States and Europe might look for ways to exempt certain Russian sectors, such as energy, from sanctions. However, moves to cut off Russia’s economy could have unintended consequences, such as Moscow retaliating, that could rattle global markets.

“They are not without their own cards to play,” he said.

A switch to Swift alternatives

The threat of being cut off from Swift might not be as dire as it was in the past.

Several countries including Russia have developed their own financial messaging systems that, while less sophisticated than Swift, could allow Russian financial firms to maintain communications with the world. Russia began developing its system in 2014 amid threats of escalating sanctions from the United States.

Mr. Medvedev, who is now the deputy chairman of the Security Council of Russia, said last week that the new system was functional and that financial flows would be able to continue within Russia if the country was cut off from Swift. He acknowledged that international financial transfers could be complicated if that happened.

“Yes, they will be more difficult, it is obvious, but it won’t be a catastrophe,” Mr. Medvedev said.

Some experts on Russia sanctions agree that Western officials are overplaying the potential effects of disconnecting Russia from Swift.

“Cutting Russia off from Swift — it won’t be as painful for Russia as Western officials envision,” said Maria Snegovaya, a visiting scholar at George Washington University and a co-author of an Atlantic Council report on U.S. sanctions on Russia.