The Biden administration has imposed new sanctions on Tehran and expressed support for protesters, as the Iranian government aids Russia in the Ukraine war and continues nuclear enrichment. 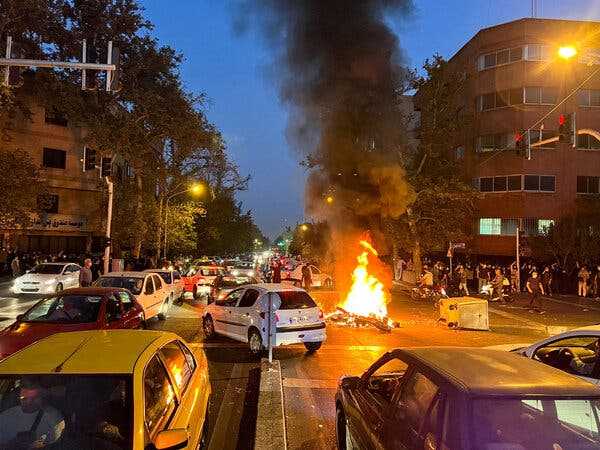 A protest in Tehran in September. The antigovernment demonstrations were kindled by the arrest and death of Mahsa Amina.

Over the past few days, Iran has told international inspectors that it plans to begin making near bomb-grade nuclear fuel deep inside a mountain that is hard to bomb, and dramatically expand its nuclear fuel production at a plant that Israel and the United States have repeatedly sabotaged.

Iranian forces have shot or locked up antigovernment protesters, provided Russia with drones for its war in Ukraine and, some Western intelligence agencies suspect, may be negotiating to produce missiles as well for Russia’s depleted arsenal. The United States accused Iran on Tuesday of once again violating Iraqi territory to conduct attacks in the Kurdistan region.

A new era of direct confrontation with Iran has burst into the open. Its emergence was hidden for a while by more dramatic events — including the Ukraine invasion and rising U.S. competition with China — and negotiations with Tehran dragged on, inconclusively, for 18 months.

Now, Mr. Biden’s hope of re-entering the United States into the deal with Iran that was struck in 2015, and that President Donald J. Trump abandoned, has all but died. Negotiations halted in September, and in recent weeks Mr. Biden has imposed new sanctions on Iran and expressed support for protests that Iran’s hard-liners have portrayed as a mortal threat.

At the White House, national security meetings on Iran are devoted less to negotiation strategy and more to how to undermine Iran’s nuclear plans, provide communications gear to protesters and interrupt the country’s supply chain of weapons to Russia, according to several administration officials.

“There is no diplomacy right now underway with respect to the Iran deal,” John Kirby, a spokesman for the National Security Council at the White House, bluntly told the Voice of America last month. “We are at an impasse right now, and we’re not focused on that.”

Henry Rome, a senior fellow at the Washington Institute for Near East Policy, said the scope of the threat goes well beyond the issue that has officials at the Pentagon especially concerned: the movement of the most worrisome nuclear enrichment activity to the underground facility called Fordow that was completed a decade ago.

“Imagine telling the incoming administration in January 2021 that within two years, Iran would be enriching to near weapons-grade uranium at Fordow, deploying its most advanced centrifuges in large numbers, accepting severely limited international monitoring, accumulating multiple bombs’ worth of highly enriched uranium and rejecting diplomatic efforts,” Mr. Rome said. “That’s not quite a worst-case scenario, but it’s pretty close.”

As recently as the summer, American officials still had hopes of reviving the nuclear deal. An agreement negotiated by European and Iranian teams was nearly complete. Representatives of the Biden administration — whom the Iranians refused to talk to directly — had approved the outlines and were awaiting a final sign-off from the supreme leader, Ayatollah Ali Khamenei. It never came.

U.S. intelligence officials assessed that reviving the deal was as unpopular among Iranian conservatives and the Islamic Revolutionary Guard Corps, which runs the military side of the nuclear program, as it was among many American critics of the arrangement. The Iranians had sought, unsuccessfully, a commitment that the United States would never again withdraw from the accord unilaterally. And they knew that once they re-entered the deal, most of the nuclear fuel Iran had amassed in response to Mr. Trump’s decision would have to be shipped out of the country.

Then came the street protests and an agreement with Russia that essentially put Iran, along with Belarus, in the position of aiding the Russian invasion.

“The regime has made a series of consequential choices that is increasingly cutting them off both from their people and from much of the international community — including European countries that had devoted the bulk of the Trump years seeking to salvage the nuclear deal,” Robert Malley, the State Department’s special envoy for the Iran negotiations, said on Tuesday.

Mr. Malley has usually been more optimistic about the chances of a diplomatic solution, but his view has clearly shifted. “Iran turned their back on a nuclear deal that was within grasp,” he said, adding that the country’s government “failed to engage” with the International Atomic Energy Agency when it demanded more visits and data to sites where nuclear material had been detected. Iran then announced plans for new nuclear production after the agency issued a resolution condemning the lack of cooperation.

The result has been “a series of vicious cycles,” Mr. Malley said. “The repression fuels more protests. The protests trigger more repression. The alliance with Russia only further isolates Iran, which prompts it to double down on this alliance for lack of any other partner.”

Of greatest concern to Israel and many in the United States was Iran’s announcement that it would begin enriching nuclear fuel to 60 percent inside Fordow, the facility it built inside a mountain, on a military base, after the repeated cyberattacks and physical assaults on the Natanz nuclear enrichment site. During the nuclear negotiations that ran from 2013 to 2015, the Obama administration tried to get the Fordow site closed. The lead negotiator, Wendy Sherman, now the deputy secretary of state, said the failure to do so was among her bigger disappointments.

Now the question is whether the more hawkish new government that Benjamin Netanyahu is trying to form in Israel will press for an attack on the facility, which would be hard to destroy except with the largest bunker-busting bombs. Both the United States and Israel have trained to conduct a strike, and Mr. Netanyahu came close to ordering one when he last served as prime minister.

By the public assessments offered by the administration, Iran has now made so much progress that it could amass fuel suitable for a bomb in a matter of weeks — down from a warning time of more than a year under the 2015 agreement. But the West would still have time: The C.I.A. and Israeli intelligence officials say that fashioning the fuel into a working weapon that could fit atop a missile would take two years, and the United States recently issued an assessment that it had no evidence of a bomb-making project underway.

But that assumes near perfect intelligence about the state of the nuclear and missile programs, at a time that inspections have been limited and cameras installed by the International Atomic Energy Agency have been shut off by the Iranians. Growing gaps in knowledge could make the diversion of nuclear fuel hard to detect. And several experts have noted that Iran is developing large cruise missiles that could eliminate many of the obstacles to delivering a weapon.

There are other complications. Iran’s provision of drones to the Russians has now become an important factor in the war, and if that cooperation extends to missiles — so far, there is no confirmation that it will — the United States and Ukraine will look for ways to disrupt the arms flow. But that could risk escalation, since Russia has so far been reluctant to attack the shipments of Western arms into Ukraine.

Mr. Biden has been more outspoken in support of the antigovernment protesters than President Barack Obama was during similar demonstrations early in his presidency. Several of Mr. Biden’s aides who served in the Obama administration said they were overcautious the last time, fearing that the protesters would be tarred as instigators linked to the C.I.A.

But that leaves open the question of how the United States can provide more than rhetorical and moral support to the protesters, and whether Mr. Biden would risk covert action to help them — especially given the long history, back to the 1950s, of C.I.A. meddling in internal Iranian politics. While that history is largely forgotten by most Americans, it is taught to young Iranians in vivid detail.

Much may depend on whether Mr. Biden and his aides now regard Iran as a larger danger than it did when the president came to office.

“The administration used to say that it wanted to put Iran’s nuclear program in a box, and I think that reflected the broader idea of putting the Iran challenge off to the side once a deal was reached,” Mr. Rome said. “But the administration must now contend with the fact that, in essentially all fields, the Iranian threat to international peace and security is greater today than it was two years ago.”