American officials said they were not aware of the plan ahead of time for the attack that killed Daria Dugina and that they had admonished Ukraine over it. 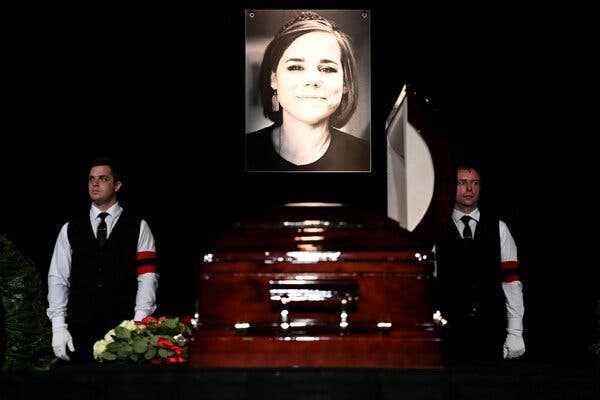 Daria Dugina’s memorial service in Moscow in August. U.S. intelligence agencies believe that parts of the Ukrainian government authorized the attack that killed her.

WASHINGTON — United States intelligence agencies believe parts of the Ukrainian government authorized the car bomb attack near Moscow in August that killed Daria Dugina, the daughter of a prominent Russian nationalist, an element of a covert campaign that U.S. officials fear could widen the conflict.

The United States took no part in the attack, either by providing intelligence or other assistance, officials said. American officials also said they were not aware of the operation ahead of time and would have opposed the killing had they been consulted. Afterward, American officials admonished Ukrainian officials over the assassination, they said.

The closely held assessment of Ukrainian complicity, which has not been previously reported, was shared within the U.S. government last week. Ukraine denied involvement in the killing immediately after the attack, and senior officials repeated those denials when asked about the American intelligence assessment.

While Russia has not retaliated in a specific way for the assassination, the United States is concerned that such attacks — while high in symbolic value — have little direct impact on the battlefield and could provoke Moscow to carry out its own strikes against senior Ukrainian officials. American officials have been frustrated with Ukraine’s lack of transparency about its military and covert plans, especially on Russian soil.

Since the beginning of the war, Ukraine’s security services have demonstrated their ability to reach into Russia to conduct sabotage operations. The killing of Ms. Dugina, however, would be one of the boldest operations to date — showing Ukraine can get very close to prominent Russians.

Some American officials suspect Ms. Dugina’s father, Aleksandr Dugin, a Russian ultranationalist, was the actual target of the operation, and that the operatives who carried it out believed he would be in the vehicle with his daughter.

Mr. Dugin, one of Russia’s most prominent voices urging Moscow to intensify its war on Ukraine, has been a leading proponent of an aggressive, imperialist Russia.

The American officials who spoke about the intelligence did not disclose which elements of the Ukrainian government were believed to have authorized the mission, who carried out the attack, or whether President Volodymyr Zelensky had signed off on the mission. United States officials briefed on the Ukrainian action and the American response spoke on the condition of anonymity, in order to discuss secret information and matters of sensitive diplomacy.

U.S. officials would not say who in the American government delivered the admonishments or whom in the Ukrainian government they were delivered to. It was not known what Ukraine’s response was.

While the Pentagon and spy agencies have shared sensitive battlefield intelligence with the Ukrainians, helping them zero in on Russian command posts, supply lines and other key targets, the Ukrainians have not always told American officials what they plan to do.

The United States has pressed Ukraine to share more about its war plans, with mixed success. Earlier in the war, U.S. officials acknowledged that they often knew more about Russian war plans — thanks to their intense collection efforts — than they did about Kyiv’s intentions.

Cooperation has since increased. During the summer, Ukraine shared its plans for its September military counteroffensive with the United States and Britain.

When asked about the U.S. intelligence assessment, Mykhailo Podolyak, an adviser to Ukraine’s president, reiterated the Ukrainian government’s denials of involvement in Ms. Dugina’s killing.

“Again, I’ll underline that any murder during wartime in some country or another must carry with it some kind of practical significance,” Mr. Podolyak told The New York Times in an interview on Tuesday. “It should fulfill some specific purpose, tactical or strategic. Someone like Dugina is not a tactical or a strategic target for Ukraine.

“We have other targets on the territory of Ukraine,” he said, “I mean collaborationists and representatives of the Russian command, who might have value for members of our special services working in this program, but certainly not Dugina.”

Though details surrounding acts of sabotage in Russian-controlled territory have been shrouded in mystery, the Ukrainian government has quietly acknowledged killing Russian officials in Ukraine and sabotaging Russian arms factories and weapons depots.

A senior Ukrainian military official who declined to be identified because of the sensitivity of the topic, said that Ukrainian forces, with the help of local fighters, had carried out assassinations and attacks on accused Ukrainian collaborators and Russian officials in occupied Ukrainian territories. These include the Kremlin-installed head of the Kherson region, who was poisoned in August and had to be evacuated to Moscow for emergency treatment.

Countries traditionally do not discuss other nations’ covert actions, for fear of having their own operations revealed, but some American officials believe it is crucial to curb what they see as dangerous adventurism, particularly political assassinations.

Still, American officials in recent days have taken pains to insist that relations between the two governments remain strong. U.S. concerns about Ukraine’s aggressive covert operations inside Russia have not prompted any known changes in the provision of intelligence, military and diplomatic support to Mr. Zelensky’s government or to Ukraine’s security services.

In a phone call on Saturday, Secretary of State Antony J. Blinken told his Ukrainian counterpart, Dmytro Kuleba, that the Biden administration “will continue to support Ukraine’s efforts to regain control of its territory by strengthening its hand militarily and diplomatically,” according to Ned Price, the State Department’s spokesman.

Officials from the State Department, National Security Council, Pentagon and C.I.A. declined to comment on the intelligence assessment.

The war in Ukraine is at an especially dangerous moment. The United States has tried carefully to avoid unnecessary escalation with Moscow throughout the conflict — in part by telling Kyiv not to use American equipment or intelligence to conduct attacks inside of Russia. But now, the recent battlefield successes by Ukraine have prompted Russia to respond with a series of escalatory steps, like conducting a partial mobilization and moving to annex swaths of eastern Ukraine.

Concern is growing in Washington that Russia may be considering further steps to intensify the war, including by renewing efforts to assassinate prominent Ukrainian leaders. Mr. Zelensky would be the top target of Russian assassination teams, as he was during the Russian assault on Kyiv earlier in the war.

But now, American officials said Russia could target a wide variety of Ukrainian leaders, many of whom have less protection than Mr. Zelensky.

The United States and Europe had imposed sanctions on Ms. Dugina. She shared her father’s worldview and was accused by the West of spreading Russian propaganda about Ukraine.

Russia opened a murder investigation after Ms. Dugina’s assassination, calling the explosion that killed her a terrorist act. Ms. Dugina was killed instantly in the explosion, which occurred in the Odintsovo district, an affluent area in Moscow’s suburbs.

After the bombing, speculation centered on whether Ukraine was responsible or if it was a false flag operation meant to pin blame on Ukrainians. The bombing took place after a series of Ukrainian strikes in Crimea, part of Ukraine that Russia seized in 2014. Those strikes had led ultranationalists in Mr. Dugin’s circle to urge Mr. Putin to intensify the war in Ukraine.

Ilya Ponomarev, a former member of the Russian Duma who voted against the annexation of Crimea, has claimed that a group made up of pro-Ukrainian and anti-Putin fighters operating in Russia known as the National Republican Army was responsible for the killing.

In an interview with The New York Times, Mr. Ponomarev claimed to be in contact with the National Republican Army and was aware of the operation against Ms. Dugina several hours before it occurred. Many officials in Washington have been skeptical of Mr. Ponomarev’s claims on behalf of the group.