The former president, averse to leaving records of his communications, had long avoided text and email. 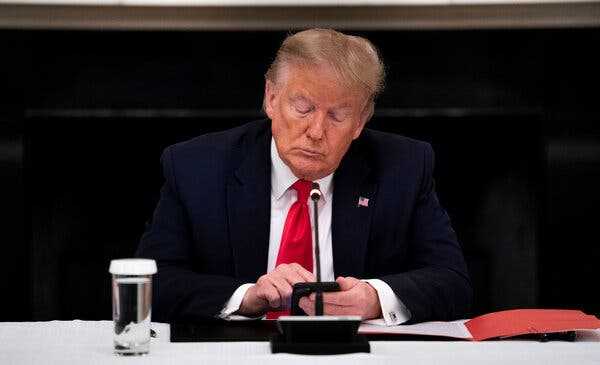 Former President Donald J. Trump has long been constantly on his phone, but only to talk into it — or, before he was kicked off Twitter, to send streams of tweets.

One of former President Donald J. Trump’s most consistent personal traits — one that his advisers say has helped keep him out of even worse legal jeopardy — has been his refusal to communicate by text or email.

Mr. Trump, 76, who is heading into his third presidential campaign and is still under scrutiny by investigators on multiple fronts, has at last become a texter, according to three people with knowledge of his new habit. His messages have recently shown up in the phones of surprised recipients, they said.

The former president’s resistance to texting frustrated investigators for the House Jan. 6 committee as they tried to track his thoughts and actions when he worked to overturn the 2020 election. In his testimony before the committee, the former president’s eldest son, Donald Trump Jr., said he texted the White House chief of staff, Mark Meadows, during the Capitol attack because his father “doesn’t text.”

That changed around the beginning of this year. Friends, confidants and even people not especially close to Mr. Trump began receiving text messages from his cellphone, most of them described as innocuous, such as new year greetings or political observations. A spokesman for Mr. Trump declined to comment.

The former president has long been constantly on his phone, but only to talk into it — or, before he was kicked off Twitter, to send streams of tweets. (The former aide who helped set up his Twitter account once told Politico that when Mr. Trump, who initially relied on aides to write his posts, began to tweet on his own, it was akin to the scene in the film “Jurassic Park” when the velociraptors learned to open doors.)

For years, people corresponding with him sent him text messages, which always went unanswered. He was unreachable by email. He sometimes asked aides to send electronic messages to reporters, referring to the missives as “wires,” like a telegram.

Now, his delayed embrace of what has long been a default mode of communication spanning generations signals not only a willingness to join in the world of LOL’s and BRB’s but also a small shift from his aversion to leaving paper or electronic trails.

People who have worked for Mr. Trump in the White House and in his private business say he has prided himself on being “smart” for leaving almost no documentation of his communications and discussions in meetings. That included snatching notes being taken in real time by a junior legal associate in his offices in the 1990s, when Mr. Trump spotted the man scribbling, according to a consultant working for him then.

Those who have witnessed firsthand his visceral aversion to record-keeping said they were shocked to learn about his new electronic habit.

Mr. Trump upbraided Mr. Bolton, who wrote one of the most searing book-length accounts of the Trump presidency, for taking notes during meetings.

“I’ve had a lot of great lawyers, like Roy Cohn. He did not take notes,” Mr. McGahn recounted Mr. Trump saying, referring to his ruthless longtime fixer and mentor who became the prototype for what Mr. Trump sought in a lawyer.

A former Trump White House official, who asked not to be identified in order to speak candidly, described the former president’s penchant for avoiding leaving records so there was “nothing to follow” as a possible “parable from Roy Cohn’s time.”

The fact that Mr. Trump is now sending texts has caused alarm among some of his associates, who are concerned about what he might say. Still, they have been relieved about another shift: His phone now sends calls that are not from numbers in his contacts to voice mail, according to two people familiar with the change.

That shift occurred this month, after an NBC reporter called Mr. Trump directly during Representative Kevin McCarthy’s desperate fight to be elected speaker of the House. Mr. Trump picked up, giving a brief interview that created some political heartburn for Republicans.