The Infowars fabulist and his followers intensified their fear and trauma, Sandy Hook survivors say on the first day of a critical trial. 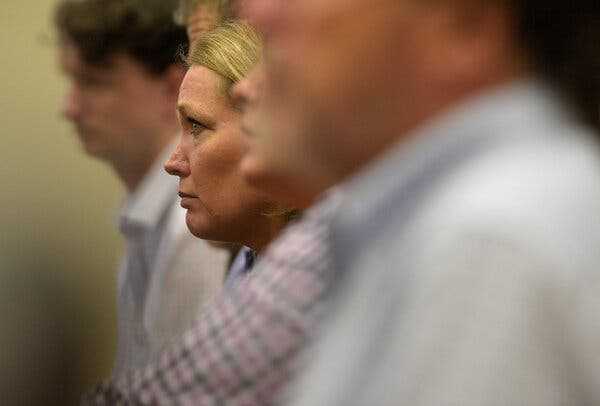 Nicole Hockley, mother of Dylan Hockley, in court during the first day of the Alex Jones Sandy Hook trial on Tuesday

WATERBURY, Conn. — In wrenching testimony Tuesday, the families of eight Sandy Hook victims began telling a jury about years of torment and threats they had endured after the Infowars fabulist Alex Jones claimed the school massacre was a government hoax in which they were “actors.”

Carlee Soto Parisi, whose sister Vicki Soto was a first-grade teacher killed at Sandy Hook, was the first family member to testify on Tuesday, the beginning of what is expected to be a monthlong trial. Ms. Soto Parisi described her sister’s last evening alive, which she spent buying books for her class and a new cellphone — later found near her body, alight with worried text messages from her family. The families’ lawyers are seeking to establish that Mr. Jones, who called the families “actors” in broadcasts to his online and radio audience of tens of millions, was the primary amplifier of lies casting the Sandy Hook families as complicit in a government plot to impose stricter gun control.

Ms. Soto Parisi described how a widely circulated photograph of her crying into her cellphone as she sought news about her sister’s fate ignited false claims that her sister had not died, and she was an actor who had appeared at other scenes of mass tragedy. In 2015, at a five-kilometer run sponsored by the family to honor Ms. Soto’s memory, Matthew Mills of Brooklyn accosted the family, waving a photo of them and claiming “this never happened,” Ms. Soto Parisi recalled. Mr. Mills was arrested and charged with breach of peace.

Mr. Jones for years spread lies on his radio and online show that the Dec. 14, 2012, shooting that killed 20 first graders and six educators at the Sandy Hook Elementary School in Newtown, Conn., was a government pretext for gun control. Late last year, Mr. Jones lost four separate defamation lawsuits filed by the families of 10 Sandy Hook victims, who had endured years of online torment and threats from conspiracy theorists who believed Mr. Jones’s bogus claims.

Understand the Cases Against Alex Jones

A united front. Alex Jones, a far-right conspiracy theorist, is the focus of a long-running legal battle waged by families of victims of a mass shooting at Sandy Hook Elementary School in Newtown, Conn., in 2012. Here is what to know:

Pushing misinformation. Mr. Jones used his Infowars media company to spread lies about Sandy Hook, claiming that the attack in 2012, in which 20 first graders and six educators were killed, was a hoax. The families of the victims say Mr. Jones’s lies have added to their devastation and his followers have harassed them, threatening their safety.

Defamation lawsuits. The families of 10 Sandy Hook victims sued Mr. Jones in four separate lawsuits. The cases never made it to a jury; Mr. Jones was found liable by default in all of them because he refused to turn over documents, including financial records, ordered by the courts over four years of litigation.

Mr. Jones’s line of defense. The Infowars host has claimed that his right to free speech protected him, even though the outcome of the cases was due to the fact that he failed to provide the necessary documents and testify.

Three new trials. A trial in Austin, Texas this July was the first of three that will determine how much Mr. Jones must pay the families of the Sandy Hook victims. The other two are scheduled for September, but are on hold after Mr. Jones put the Infowars parent company, Free Speech Systems, into Chapter 11 bankruptcy last week, halting all pending litigation.

Compensatory and punitive damages. On Aug. 4, a jury in the Texas trial awarded the parents of one of the children killed in the mass shooting more than $4 million in compensatory damages, which are based on proven harm, loss or injury. A day later, jurors decided Mr. Jones must pay the parents $45.2 million in punitive damages, which aim to punish especially harmful behavior and tend to be granted at the court’s discretion.

The families’ sweeping victory set in motion three trials for juries to decide how much Mr. Jones should pay the families in compensatory and punitive damages.

In the first trial earlier this summer, a jury in Austin, Tex., awarded Scarlett Lewis and Neil Heslin, parents of Jesse Lewis, who died at Sandy Hook, nearly $50 million, but Texas law caps that verdict at far less.

In the trial that began Tuesday, the second of the three, families of eight Sandy Hook victims sued Mr. Jones in Connecticut, where state law allows for a potentially ruinous financial verdict.

Mr. Jones has repeatedly and erroneously attempted to cast the Sandy Hook families’ lawsuits as an effort by Democratic elites to silence him, and has called the Connecticut case purely political. On Tuesday his lawyer, Norm Pattis, pressed that case, at one point drawing a threat by Connecticut Superior Court Judge Barbara Bellis to find him in contempt of court.

Mr. Pattis appeared unswayed, asserting in court that Hillary Clinton, who had mentioned Mr. Jones’s Sandy Hook lies during the 2016 presidential campaign, was somehow responsible for the lawsuits. Mr. Pattis in the past has sought to depose Mrs. Clinton in the case.

The families focused on the damage done by Mr. Jones’s lies about the shooting. Chris Mattei, a lawyer for the families, told the jury that Infowars was wholly run by Mr. Jones, whose business model involved selling diet supplements and survivalist gear by spreading “fear and anxiety and paranoia in his audience,” Mr. Mattei said. Flashing family photos of the victims on a screen, he told the jury: “They didn’t know Alex Jones — but he knew them.” In order to sell merchandise, Mr. Jones turned the families’ memories “into a battleground, something to be ripped apart,” Mr. Mattei added.

One of the judgments against Mr. Jones last year found him liable for violating the Connecticut Unfair Trade Practices Act by using false claims about Sandy Hook to sell his products. The families aim to show that Infowars’ online sales surged when Mr. Jones aired his bogus claims. On Tuesday Mr. Mattei showed the jury statistics from 2011 illustrating the already substantial reach of Mr. Jones’s show, and how it had grown after the shooting to hundreds of millions of page views.

Mr. Jones and his lawyers say he spoke so little about Sandy Hook that it could not have contributed significantly to his sales, but they have so far failed to submit evidence supporting that claim.

Even before the jury was seated on Tuesday, both sides clashed over Mr. Jones’s longstanding refusal to submit data that the families said would show he had profited from his Sandy Hook lies, and Mr. Jones said is not relevant. The judge reminded Mr. Pattis that Mr. Jones’s “obstructive” and “stunningly cavalier” attitude during discovery was why he lost the lawsuits in the first place.

She then barred Mr. Jones and Mr. Pattis from arguing to the jury that he had not profited from his Sandy Hook theories.

First to testify on Tuesday was William Aldenberg, an F.B.I. agent who had responded to the Sandy Hook shooting. Struggling with emotion, Mr. Aldenberg described his horror at what he found when he entered the school. A photograph of him in a helmet and bulletproof vest that day spawned a bizarre theory that he and David Wheeler, whose son Ben died in the massacre, were both the same “crisis actor.” The bogus theory that Mr. Wheeler played the role of both a first responder and a grieving parent after the shooting brought online harassment and threats to both men.

Mr. Aldenberg wept on the stand Tuesday as Mr. Wheeler watched from the gallery. Though he had no idea how the theory had originated, “I felt responsible” for the grieving father’s pain, Mr. Aldenberg testified.