The far-right group has maintained that it only uses physical force defensively, but testimony in the seditious conspiracy trial of five of its members has focused on its culture of aggression. 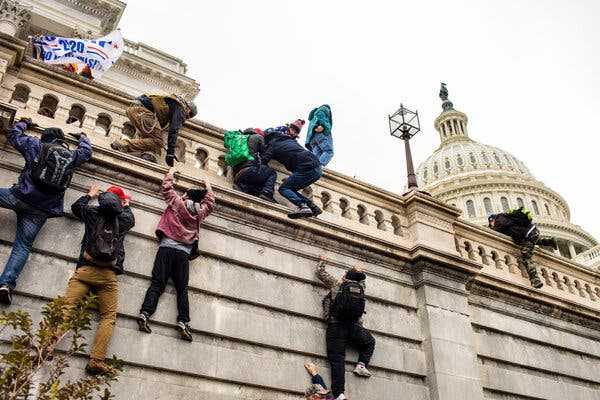 The Jan. 6 sedition trial will hinge almost entirely on the question of violence.

Ever since the Proud Boys burst into the spotlight nearly seven years ago, the far-right group has done a complicated dance around the issue of political violence.

Its leaders have always claimed that members act defensively during protests, raising their fists only to protect themselves or others. “We don’t start fights,” Gavin McInnes, the Proud Boys’ founder, has said more than once. “But we will finish them.”

At the same time, Mr. McInnes has often spoken with a kind of winking glee about the group’s violent tendencies and some of its members have rocketed to fame after dealing brutal blows during street brawls. It is not uncommon to see Proud Boys wearing T-shirts lionizing acts like throwing people out of helicopters or featuring logos reading, “I’m Just Here for the Violence.”

In the past few days, the subject of violence — along with the Proud Boys’ opinions of it — has taken center stage at the trial of five members of the group charged with seditious conspiracy in connection with the storming of the Capitol on Jan. 6, 2021.

On Tuesday, Matthew Greene, the first Proud Boy to take the stand as a prosecution witness, told the jury about the culture of aggression that pervades the group — or what he described as “a collective expectation among Proud Boys” that violence would be used during political demonstrations.

“I believed from my experience that violence was celebrated,” Mr. Greene said.

As a legal matter, the sedition trial, in Federal District Court in Washington, will hinge almost entirely on the question of violence. To prove seditious conspiracy, prosecutors need to convince the jury that the five defendants — among them Enrique Tarrio, who led the Proud Boys on Jan. 6 — had an agreement to use physical force to oppose the authority of the government or those federal laws that oversee the transfer of presidential power.

The testimony of Mr. Greene, a former Army soldier from Syracuse, N.Y., did little to advance the prosecution’s case. Under cross-examination on Wednesday, he acknowledged several times that the Proud Boys did not arrive in Washington on Jan. 6 planning to use violence. Instead, he said, the group’s role in the Capitol attack, while extensive, was both disorganized and essentially spontaneous.

ImageJoseph Biggs, a leader of the far-right Proud Boys.

Still, during his two days on the witness stand, Mr. Greene made a broader point about the Proud Boys’ use of violence. He told the jury that he believed that violence was baked into the group’s culture and that members were expected to use it in chaotic situations on the street.

“If violence did happen, it was celebrated,” Mr. Greene said, “and people were encouraged for having responded in kind from someone attacking them or whatever it is. That’s where I got my expectation: from the people around me.”

Early in his testimony, Mr. Greene challenged another one of the Proud Boys’ oft-repeated statements about violence: that the group’s members never seek out aggression, but merely react to it.

He told the jury how a large group of Proud Boys went in search of conflict with their leftist adversaries in the antifa movement on Dec. 11, 2020, one night before they were to take part in a pro-Trump rally in Washington.

“When we were marching around, we were looking for antifa,” he testified. “We were trying to get as close as possible, come face to face with them. And when we did find them, we were trying to goad them into physical confrontation.”

In fact, the confrontation came the next evening — on Dec. 12 — when, as the jury has repeatedly heard, Mr. Tarrio and several other Proud Boys stole a Black Lives Matter banner from a local church and burned it in the streets. Not long after, the Proud Boys engaged in a violent scuffle with antifa protesters and some of their own members were stabbed.

Prosecutors plan to use that incident to show the jury how the Proud Boys turned against the police after years of having troublingly close relationships with officers across the country. The government wants to demonstrate that the group became disillusioned, believing that law enforcement had failed to protect it, to explain the events of Jan. 6 when Proud Boys took the lead in assaulting the police.

But while the jury has been told about some of the Proud Boys’ violent episodes, it has not heard about all of them. Last week, Jason McCullough, the lead prosecutor in the case, told Judge Timothy J. Kelly without the jury present that the government had purposefully not sought to introduce evidence of the group’s prior acts of aggression — which, he noted, were extensive.

Since early 2017, the Proud Boys have been involved in a steady series of political protests in cities around the country that have often exploded into bloody fighting. Several members have been charged and convicted of assault for what amount to acts of political violence. Others have been found guilty of weapons charges for brandishing a loaded revolver and firing paintballs at leftist counterprotesters.

In just the year or so surrounding the Capitol attack, the Proud Boys took part in 37 demonstrations that turned violent in nine states from New York to California, according to the Armed Conflict Location and Event Data Project, which tracks violent protests. Twenty-five of the Proud Boys’ violent demonstrations occurred between Election Day in 2020 and the inauguration of President Biden, the project’s data found.

During Monday’s trial session, the government introduced an exhibit that helped to explain why the Proud Boys seem to have such a penchant for violence. It was a recruiting manual that detailed the steps required for initiates to be promoted to each of the group’s four ascending degrees — or levels of membership.

Some of the steps were fairly innocuous. To reach the Third Degree, for instance, members need to have the words “Proud Boy” tattooed somewhere on their body.

The Fourth Degree, however, was different, the recruiting manual said.

To achieve that rank, aspiring Proud Boys have to engage “in a major conflict for the cause.” While being arrested was not encouraged, it would result in immediate promotion to the Fourth Degree, the manual said.

“Serious physical fights also count,” the manual went on, “and it’s up to each chapter to determine how serious the conflict must be.”