The top Senate Republican traveled to Europe in a bid to show that isolationism hasn’t taken over his party. He has privately lobbied his colleagues to vote that way, and so far, most are. 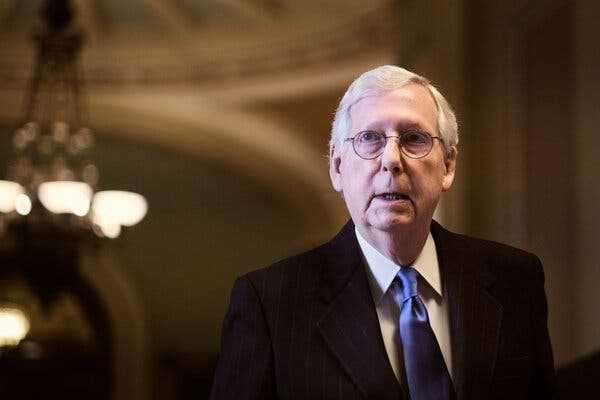 Senator Mitch McConnell of Kentucky has made a point of pushing back against isolationist voices in his party, including the “America First” policy championed by former President Donald J. Trump.

WASHINGTON — When former President Donald J. Trump came out against the $40 billion military and humanitarian aid package for Ukraine, casting it as a misguided act of charity, Senator Mitch McConnell of Kentucky feared the Republican votes against the bill could pile up.

So Mr. McConnell, the Republican leader, intensified his efforts to tamp down on the anti-interventionist strain in his party and to make the case that it was in the United States’ security interest to aid a young democracy standing between Russian aggression and the West.

He made his most forceful appeal during stops last weekend in Ukraine, Sweden and Finland, in a secretly arranged trip that he said was aimed at showing the Europeans that Mr. Trump’s “America First” views on military aid and alliances did not hold sway over Senate Republicans.

Mr. McConnell has made a point of pushing back against isolationist voices in his party, including during Mr. Trump’s presidency, when the senator broke sharply with him on drawing down troops from Syria and plans to withdraw American forces from Afghanistan.

But the Kentucky Republican also spent four years enabling and protecting Mr. Trump, clearing the way for him to install three conservative justices on the Supreme Court, engineering Mr. Trump’s acquittal in his first impeachment trial and indulging his refusal to concede the 2020 election until the last possible moment.

Now that Mr. Trump is gone, Mr. McConnell’s drive to rally sustained support in Congress for investing huge sums of American money in Ukraine’s war effort has become a kind of proxy fight with the former president over where the party will land on foreign policy.

The Senate leader emerged from a major skirmish on Thursday feeling vindicated: Only 11 Republicans voted to oppose the $40 billion aid measure, even in the face of opposition from right-wing organizations.

Mr. McConnell pointed to that vote as evidence that the isolationist impulse in his party had waned. He even praised Senator Ted Cruz of Texas, with whom he has frequently clashed, for having the “courage” to speak in favor of the bill. But polling has shown that Republicans continue to be drawn to Mr. Trump’s “America First” doctrine, and it is an open question whether the energy behind it will subside.

Mr. McConnell spoke to The New York Times after the vote about the strength and staying power of “America First” in his party, why the Senate should quickly ratify Finland’s and Sweden’s accession to NATO, and the definition of victory in Ukraine.

This interview has been edited and condensed for clarity.

Why did you decide to make the trip to Europe last weekend?

One was to try to convey to the Europeans that skepticism about NATO itself, expressed by the previous president, was not the view of Republicans in the Senate. And I also was trying to minimize the vote against the package in my own party.

We have sort of an isolationist wing, and I think some of the Trump supporters are sort of linked up with the isolationists — a lot of talk out in the primaries about this sort of thing. And I felt this would help diminish the number of votes against the package. I think that worked out well.

I’d had a private dinner with the president of Finland back in March, right after the invasion, so we’d sort of developed a relationship. So we decided to head up to Stockholm and Helsinki. These are incredibly important admissions to NATO. They both have great militaries. They’re both independent of Russian energy. If anybody’s ready to be a part of NATO, these two countries are, so it was exciting to be there.

I think the trip helped convince Europeans that Republicans are the way we used to be on NATO.

Did you personally lobby individual senators to try to allay some of their concerns about the aid bill?

I certainly was talking about it for the last two weeks to my own colleagues. I said, No. 1, this is a pittance compared to the $2 trillion the Democrats dumped on the economy last year, producing 40-year-high inflation. If ever there were a reason where for an expenditure of this amount, this is it. And if the Russians succeeded, it would cost us a lot more. So yes, I was arguing for support for the package.

There are not many things we agree with this administration on. And that’s been pretty widely on display the last year and a half. I thought they were a little bit slow to get started, a little bit too intimidated by the thought of provoking the Russians, and we did criticize the slowness. However, I think they’ve stepped up their game. I think they are fully engaged. And I think the administration shares my view that the outcome of this ought to be victory.

What’s the definition of victory? I can tell you that President Volodymyr Zelensky of Ukraine believes victory is getting his country back. All of it.

The Ukrainians are trying to get on offense. And I believe this weapons package is crafted in such a way to give them what they need now, not only to win the ground war, but hopefully to have some impact on getting the Odessa port back open again, because the absence of Ukrainian food is going to resonate throughout the Middle East and Africa as well.

Our intelligence community says they believe that President Vladimir V. Putin of Russia is counting on American resolve flagging. As the conflict drags on, do you think it’s going to be harder to maintain support from Republicans for sending aid to Ukraine?

Well, we’ll see how much pain he can sustain. All indications are, they’re sustaining significantly more pain than we are. He’s counting on us kind of running out of interest and losing steam, not having a staying power — and I think he’s wrong about that. And I think he’s underestimating the amount of pain he’s getting.

You probably can’t fool the Russian people, like the mothers of the people who’ve been killed and maimed. They lost more people in the first two weeks of this war than we lost in Afghanistan plus Iraq in 20 years. We’ll see how long he can sustain it.

You’ve noted that isolationism among Republicans is nothing new. But does what we’re currently seeing in some corners of your party feel different or more dangerous to you than what we’ve seen in the past?

Russia’s punishment of Finland. Russia will cut natural gas supplies to Finland on May 21, according to Finland’s state energy provider. Russia said that it was suspending the supply because Finland had failed to comply with its demand to make payments in rubles. Finland has also submitted an application to join NATO, angering Russia.

Support for Ukraine. The Group of 7 economic powers agreed to provide nearly $20 billion to support Ukraine’s economy over the coming months.The U.S. Senate overwhelmingly approved a $40 billion aid package for Ukraine, bringing the total American investment in the war to $54 billion in just over two months.

In southeast Ukraine. Fresh from its triumph over the last armed Ukrainian resistance in Mariupol, Russia appeared to be laying the groundwork for annexing swaths of southeast Ukraine. Officials have already moved to introduce the ruble currency, install proxy politicians in local governments and cut the population off from Ukrainian broadcasts.

NATO’s expansion. Turkey’s president, Recep Tayyip Erdogan, said he was determined to “say no to Finland and Sweden’s NATO membership,” though he is willing to continue talking to European leaders. He has pointed to the two nations’ stance toward Kurdish militant groups he regards as terrorist organizations as a reason for his objections.

I don’t feel it’s dangerous. You know, I’ve been here a long time, and I’ve watched a lot of campaign rhetoric that seems to disappear once you’re sworn in, and you actually are responsible for governing and confronted with the facts and reality. So I have a tendency not to get overexcited about what A or B may be saying in some primary somewhere in America. I think this is one of those issues where, right and wrong — it’s pretty clear.

And of course, the best salesman against isolationism in America is President Zelensky. As you heard others say, Winston Churchill in a T-shirt. He’s an inspiration, not only to his own people, but to us as well.

For a lot of younger people in America, this is the first time they’ve ever seen a clear battle between right and wrong. To a lot of people, Afghanistan was murky. Iraq was murky. It just didn’t seem like a clear choice. I thought both those wars were necessary, by the way, but it was confusing to people. I don’t think anybody’s confused about this.

We’ve seen the bodies, we’ve seen the destroyed buildings. I don’t think anybody’s confused about who the bad guys are and who the good guys are, and whether or not America really ought to play that kind of role it has traditionally since World War II: being the leader of the free world in opposition to this kind of authoritarianism.

How important do you think the China factor was in all of this?

Huge. You’ve got both the prime minister of Japan and the defense minister of Japan saying if you want to push back against the Chinese, the single most important thing to do is beat Putin in Ukraine. That’s from the Japanese, whose biggest worry is not Putin but Xi Jinping.

Senator Ted Cruz’s vote for the aid bill was interesting. He gave a very long speech explaining why, and one of the reasons was to counter China.

It was an excellent speech, I thought. And since he is among our most conservative members, I thought it was courageous and correct for him to say what he did, to people who follow him carefully. And in fact, I mentioned to him today, I thought it was really excellently crafted and an important message for someone like him to say. He’s clearly chosen a different path from another of our members who has presidential aspirations.

You said it was courageous — why?

Well, if you think of the brand of Republicans that you would typically think Senator Cruz would appeal to, this is not what they want to hear. That’s why I applied the word “courage” to it, because I think he was educating his supporters rather than mirroring them.

You seem confident that the Senate will ratify adding Sweden and Finland to NATO. Is there any concern about the level of risk that would entail for the United States and our allies, particularly given that Finland has 800 miles of shared border with Russia?

Did you read or hear about what the Finns did to the Russians in 1939? They had a hell of a war. The Soviets tried to take over Finland, and the Finns fought them to a draw.

I don’t think the Russians want to mess with the Finns. They’ve got a great military; they already spend 2 percent of gross domestic product on defense. Sweden will be up to 2 percent shortly but already has a good military. So I’m not worried about it.

Their concern was, how long will it take for us to ratify? Chuck [Senator Chuck Schumer, Democrat of New York and the majority leader] feels the same way I do: We’re trying to expedite this process and get this treaty or treaties — however they decide to send it up to us — approved as quickly as possible.