The ruling made Couy Griffin, a county commissioner in New Mexico, the first official in more than 100 years to be removed under the Constitution’s bar on insurrectionists holding office. 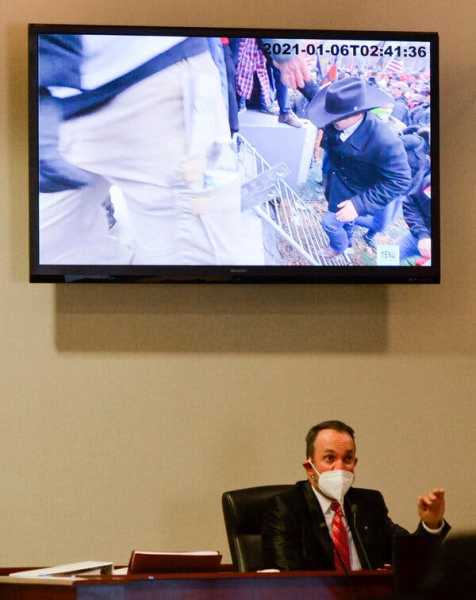 Couy Griffin, an Otero County commissioner, responded to questioning in court, after watching a video of himself on U.S. Capitol grounds on Jan. 6, 2021.

WASHINGTON — A judge in New Mexico on Tuesday ordered a county commissioner convicted of participating in the Jan. 6 riot at the Capitol removed from office under the 14th Amendment, making him the first public official in more than a century to be barred from serving under a constitutional ban on insurrectionists holding office.

The ruling declared the Capitol assault an insurrection and unseated Couy Griffin, a commissioner in New Mexico’s Otero County and the founder of Cowboys for Trump, who was convicted earlier this year of trespassing when he breached barricades outside the Capitol during the attack. The judge’s order grabbed the attention of advocates across the country who have been pushing to use the 14th Amendment to disqualify former President Donald J. Trump and elected officials who worked with him in seeking to overturn the 2020 election from holding office in the future.

In his decision, Judge Francis J. Mathew of the New Mexico District Court said the insurrection on Jan. 6 included not only the mob violence that unfolded that day, but also the “surrounding planning, mobilization and incitement” that led to it.

“Mr. Griffin is constitutionally disqualified from serving,” the judge wrote.

Liberal groups have filed legal challenges in Arizona, New Mexico, North Carolina and Wisconsin seeking to block lawmakers accused of supporting the Jan. 6 rioters — including some prominent Republican members of Congress — from holding office under the Constitution. Until Tuesday, none had succeeded.

“This just went from being theoretical to being something that is legally recognized and legally possible,” said Noah Bookbinder, director of Citizens for Responsibility and Ethics in Washington, a nonpartisan watchdog organization that filed suit against Mr. Griffin on behalf of a group of New Mexico residents. “That’s hugely significant. It could have real implications for protecting the country from people associated with the effort to overturn the last election.”

Section 3 of the 14th Amendment, adopted during Reconstruction to punish members of the Confederacy for taking up arms against their country in the Civil War, declares that “no person shall” hold “any office, civil or military, under the United States, or under any state, who, having previously taken an oath” to “support the Constitution,” had then “engaged in insurrection or rebellion against the same, or given aid or comfort to the enemies thereof.”

Reconstruction-era federal prosecutors brought civil actions in court to oust officials linked to the Confederacy, and Congress in some cases refused to seat members, according to the Congressional Research Service.

But the last time the section of the amendment was enforced was in 1919, when Congress refused to seat a socialist member who was accused of giving aid and comfort to Germany during World War I.

An appeals court ruled in May that participants in an insurrection against the U.S. government could be barred from holding office, but the target of that case, Representative Madison Cawthorn, Republican of North Carolina, had already lost his primary, rendering the matter essentially moot.

In a challenge to the candidacy of Representative Marjorie Taylor Greene, Republican of Georgia, a judge also said the Jan. 6 attack on the Capitol qualified as an insurrection but said that there was insufficient evidence to prove that Ms. Greene engaged in it.

In some ways, Mr. Griffin’s case was a cleaner win for advocates seeking to punish officials connected to the riot because he was part of the mob that stormed the Capitol, not a lawmaker sitting inside.

On Jan. 6, Mr. Griffin and a videographer clambered over barricades at the Capitol and made their way onto the inauguration stage in front of the building. There, Mr. Griffin spent more than an hour addressing the mob through a bullhorn. He later said that he had been attempting to lead them in prayer.

In March, Judge Trevor N. McFadden, presiding at a bench trial in Federal District Court in Washington, found Mr. Griffin guilty of one misdemeanor count of illegally entering a restricted area at the Capitol and acquitted him of another that accused him of disorderly conduct. Mr. Griffin was sentenced in June to 14 days in prison.

Mr. Griffin’s attempts to challenge Mr. Trump’s defeat in the 2020 election — including issuing calls for violence on behalf of the former president — preceded the events of Jan. 6, according to the ruling by the judge in New Mexico.

As early as November 2020, the ruling said, Mr. Griffin attended Stop the Steal rallies in his home state, some of them with a militia group known as the New Mexico Civil Guard. He also took part in a multicity bus tour arranged by the pro-Trump group Women for America First designed to recruit protesters to go to Washington for Mr. Trump’s speech on Jan. 6, in which he called on his supporters to “fight like hell” against his election loss and urged them to march to the Capitol while Congress was meeting to confirm it.

At a stop in The Woodlands, Texas, on Jan. 1, 2021, the ruling said, Mr. Griffin urged a crowd to view the attempts to overturn the election as a last-ditch fight, comparing it to the famous standoff at the Alamo.

“This is a battle and a war we cannot lose,” Mr. Griffin said.

Two days later, in Bowling Green, Ky., Mr. Griffin told a crowd that a war was underway with “the elitist, gross, wicked, vile people,” adding, “We got to get our country back.”

In Atlanta, on Jan. 4, the ruling said, Mr. Griffin anticipated that there could be violence when crowds of people descended on Washington for Mr. Trump’s speech. Speaking to another crowd, he called on “men from across our nation to come to Washington, D.C., on Jan. 6, because it might be a battle.”

Mr. Griffin represented himself in the 14th Amendment case. Nicholas Smith, a lawyer who represented him during his criminal trial, declined to comment.

Even after his criminal conviction, Mr. Griffin, a bombastic man who briefly considered riding a horse to his sentencing at the courthouse in Washington, continued to publicly disparage the case and insult the judge who heard it.

He took to Twitter, court papers said, and complained that Judge McFadden had issued a “PRE written” guilty verdict, decrying it as “pathetic” and adding, “I wonder who wrote it?”

After he was sentenced, Mr. Griffin urged reporters to examine a series of debunked conspiracy theories about Jan. 6, including one about an Arizona man who was falsely pegged as an undercover F.B.I. agent who had instigated the mob that day. Around that time, Mr. Griffin also took part in an attempt by the Otero County commission to reject certification of a recent local election until voting machines in the county were inspected.