Nikki Haley, the former United Nations ambassador, used a well-timed endorsement of Representative Nancy Mace to get on the opposite side of the former president. 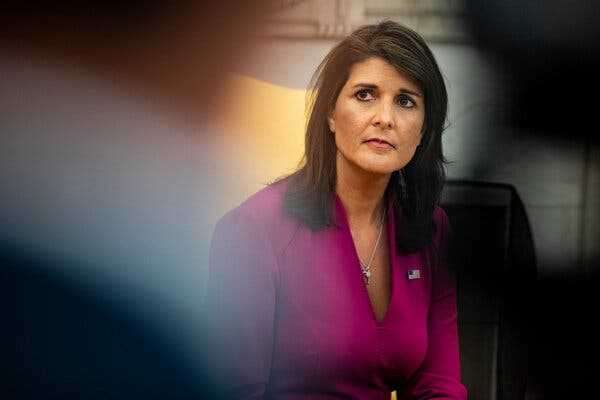 WASHINGTON — Rumors were swirling in South Carolina early this February that Donald J. Trump would try to tear down a Republican congresswoman who had incurred his wrath.

Then Nikki Haley, his former United Nations ambassador and South Carolina’s former governor, made her move.

On Feb. 7, Ms. Haley endorsed the congresswoman, Representative Nancy Mace, jumping ahead of Mr. Trump, who backed Ms. Mace’s rival two days later. The timing of Ms. Haley’s move was widely viewed as deliberate — allowing her to exert her influence in the race without directly challenging Mr. Trump’s judgment.

“Nikki’s very smart — it’d never occur to me that she doesn’t know exactly what she’s doing,” said South Carolina’s treasurer, Curtis Loftis. “If the political winds change for President Trump, she’s prepared to be there, and this is part of that.”

Mr. Trump will be in Florence, S.C., on Saturday to rally his faithful behind Ms. Mace’s primary challenger, Katie Arrington, and another pro-Trump Republican, Russell Fry, who is challenging Representative Tom Rice, one of 10 Republicans who voted to impeach the former president for inciting the Jan. 6 attack on the Capitol. Mr. Fry and Ms. Arrington will share the stage, along with several conservative luminaries, including Gov. Henry McMaster of South Carolina and Drew McKissick, the state’s Republican Party chairman. Ms. Haley will not be there.

To Republicans in the state, Ms. Haley is playing a shrewd and careful game by seeming to distance herself from Mr. Trump and yet continuing to embrace him at the same time.

Just after the attack on the Capitol last year, Ms. Haley pronounced herself “disgusted” with her former boss, but since then, she has been trying to get back in his good graces. She has been appearing on television to say that the Russian president, Vladimir V. Putin, would have never invaded Ukraine if Mr. Trump were still president. She has endorsed and raised funds for many pro-Trump candidates, while staying out of some of the races where he has endorsed challengers.

But in the case of Ms. Mace, backing her early on was a way for Ms. Haley to get on the right side of Republican politics in her home state, in case Mr. Trump’s endorsements falter — and he falters with them. In South Carolina, where the former governor remains popular, the state’s early primary has often been decisive to presidential nominations; Ms. Haley and other Republicans in Mr. Trump’s shadow are positioning for possible presidential bids in 2024.

“South Carolina is a hugely influential political state,” said Matt Moore, a Republican campaign consultant and former party chairman in the state. “The stakes are high, and the foundations are being set for the next decade. You want to have folks on your team.”

ImageIn her first speech in Congress, Representative Nancy Mace said the House needed to “hold the president accountable” for the Capitol attack on Jan. 6, 2021, but she voted against Mr. Trump’s impeachment.Credit…Stefani Reynolds for The New York Times

Ms. Haley declined to be interviewed. But her aides said her endorsement of Ms. Mace had nothing to do with rumors of a pending endorsement for Ms. Arrington from Mr. Trump.

“Ambassador Haley’s endorsement of Congresswoman Mace was based entirely on her record as a tough-as-nails conservative on national security, the border, law enforcement and opposing mandates on our kids,” Chaney Denton, a Haley spokeswoman, said.

Ms. Haley is not shying away now. She headlined a fund-raiser Friday afternoon for Ms. Mace at The Harbour Club in Charleston, S.C., that raised around $300,000 as Mr. Trump’s forces gathered upstate.

“Jumping in the middle of this and holding a fund-raiser when President Trump is coming down here? That isn’t keeping your powder dry. That’s loading up your gun,” said Katon Dawson, a former Republican Party chairman in South Carolina.

Mr. Trump has endorsed only eight Republican challengers to sitting House Republicans, and two of them are in South Carolina. Ms. Mace, a freshman who made her name as the first female cadet to graduate from The Citadel, a military college in Charleston, is unlike most of Mr. Trump’s incumbent targets.

In her first speech in Congress in January 2021, Ms. Mace said the House needed to “hold the president accountable” for the Capitol attack, but she voted against his impeachment. She also opposed the creation of a bipartisan commission to investigate the attack, another vote that Mr. Trump has used to determine his endorsements.

But Ms. Mace has been steadfast in saying that Mr. Trump lost the 2020 election. When he endorsed Ms. Arrington, Mr. Trump declared Ms. Mace “an absolutely terrible candidate” whose “remarks and attitude have been devastating for her community, and not at all representative of the Republican Party to which she has been very disloyal.”

Ms. Mace then appeared in front of Trump Tower in Manhattan to praise the former president’s record and policies, saying, “If you want to lose this seat once again in a midterm election cycle to Democrats, then my opponent is more than qualified to do just that.”

Mr. Trump will not be assuaged. On Friday, he said in a statement he “will be honoring Katie Arrington, who is running against the absolutely horrendous Nancy Mace,” predicting “big crowds at the Florence Regional Airport.”

Further complicating matters, Ms. Arrington, the chief information security officer for acquisition and sustainment at the Department of Defense, was placed on leave last June over a suspected leak of classified information from the National Security Agency, a situation that has not gone unnoticed by Ms. Mace’s campaign.

Republican officials in South Carolina said Ms. Arrington may have tipped Ms. Haley off about jumping into the primary race. Ms. Arrington was among a small group of South Carolina Republicans who visited Mr. Trump at Mar-a-Lago the weekend of Feb. 5. When she heard he was going to endorse Mr. Fry, she began letting Republicans know widely that she, too, would be entering a race, with Mr. Trump’s endorsement.

Ms. Haley is no Trump foe. Most of her endorsements have gone to Trump-favored candidates. She endorsed on Thursday the re-election of Senator Ron Johnson, Republican of Wisconsin, and cut a fund-raising video with Herschel Walker, the former football star recruited by Mr. Trump to run for the Senate in Georgia.

She pointedly has not endorsed Mr. Rice for re-election. Mr. Dawson, the former state party chairman, said Ms. Haley’s campaigning for Mr. Rice in 2012 made all the difference in his victory over the former lieutenant governor, André Bauer, in the Republican primary. But Mr. Rice’s district on the North Carolina border is far more Trump country than Ms. Mace’s affluent, highly educated district that touches Charleston and hugs the Lowcountry coast.

“The Lowcountry wants a pro-Trump America First conservative to represent them,” her spokesman, Chris D’Anna, said. “Nancy knows that, indicated by her tucking her tail between her legs as she flew to New York City to shoot an apology video in front of Trump Tower.”

Austin McCubbin, Ms. Mace’s campaign manager, responded, “Our opponent has proven two things — she’s the only Republican to lose this district in 40 years, and she will say just about anything.”

Mr. Sanford, the former congressman whom Ms. Arrington defeated in 2018, said Ms. Haley had nothing to lose. Once Ms. Haley expressed her anger over Jan. 6, she would never get back in his good graces, he said, speaking from experience.

“There’s really no way forward for her,” Mr. Sanford said of Ms. Haley. “Trump is a guy who holds decided grudges and doesn’t let them go. She doesn’t want to do anything to alienate his base, but where she can find things that appeal to that mass of Republicans that don’t feel they have a home, she’ll grab it.”