In testimony in a Connecticut trial to assess the damages done by his Sandy Hook lies, the Infowars fabulist lashed out. 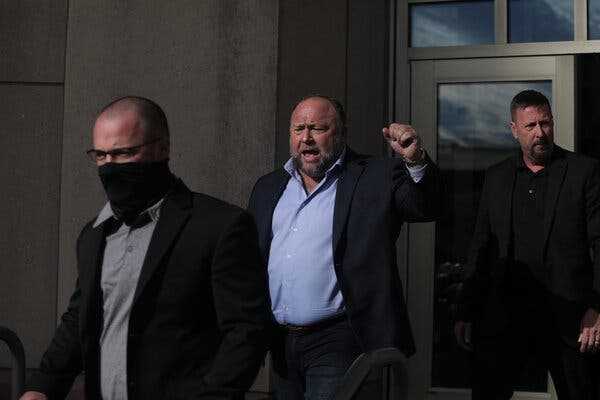 Alex Jones said that “the First Amendment will prevail” as he left the courthouse in Waterbury, Conn., on Thursday.

WATERBURY, Conn. — Alex Jones’s initial day of testimony in a trial for damages after years of lying about the Sandy Hook shootings ended in chaos.

Confronted on Thursday with the harm he had done by repeatedly lying on his Infowars radio and online show that Robbie Parker, whose daughter Emilie died in the massacre, was an actor, Mr. Jones erupted in a rant that drew a contempt threat by Judge Barbara Bellis of State Superior Court.

“Is this a struggle session? Are we in China? I’ve already said I’m sorry, and I’m done saying I’m sorry,” Mr. Jones responded, as his lawyer shouted objections.

Mr. Jones was set off by Chris Mattei, a lawyer for the families of the Sandy Hook victims, who pointed to Mr. Parker in the courtroom as he questioned Mr. Jones on the stand. “Robbie Parker’s sitting right here,” Mr. Mattei said. “He’s real, isn’t he? And for years you put a target on his back, didn’t you? Just like you did every single parent and loved one sitting here.”

“Why don’t you show a little respect, Mr. Jones?” Mr. Mattei said. “You have families in this courtroom here that lost children, sisters, wives, moms.”

Understand the Cases Against Alex Jones

A united front. Alex Jones, a far-right conspiracy theorist, is the focus of a long-running legal battle waged by families of victims of a mass shooting at Sandy Hook Elementary School in Newtown, Conn., in 2012. Here is what to know:

Pushing misinformation. Mr. Jones used his Infowars media company to spread lies about Sandy Hook, claiming that the attack in 2012, in which 20 first graders and six educators were killed, was a hoax. The families of the victims say Mr. Jones’s lies have added to their devastation and his followers have harassed them, threatening their safety.

Defamation lawsuits. The families of 10 Sandy Hook victims sued Mr. Jones in four separate lawsuits. The cases never made it to a jury; Mr. Jones was found liable by default in all of them because he refused to turn over documents, including financial records, ordered by the courts over four years of litigation.

Mr. Jones’s line of defense. The Infowars host has claimed that his right to free speech protected him, even though the outcome of the cases was due to the fact that he failed to provide the necessary documents and testify.

Three new trials. A trial in Austin, Texas this July was the first of three that will determine how much Mr. Jones must pay the families of the Sandy Hook victims. The other two are scheduled for September, but are on hold after Mr. Jones put the Infowars parent company, Free Speech Systems, into Chapter 11 bankruptcy last week, halting all pending litigation.

Compensatory and punitive damages. On Aug. 4, a jury in the Texas trial awarded the parents of one of the children killed in the mass shooting more than $4 million in compensatory damages, which are based on proven harm, loss or injury. A day later, jurors decided Mr. Jones must pay the parents $45.2 million in punitive damages, which aim to punish especially harmful behavior and tend to be granted at the court’s discretion.

Judge Bellis rebuked Mr. Jones. “This is not a press conference, this is clearly not your show,” she said. “You have to respect the process.”

At the end of the day, after the jury had gone, she warned Mr. Jones as well as his lawyer, Norm Pattis, that she would enforce a zero-tolerance policy on Friday for ignoring her orders about decorum in the courtroom. Mr. Pattis had repeatedly objected as his client shouted.

“You can expect a contempt hearing if anybody steps out of line,” Judge Bellis said. “And Mr. Jones, same thing.”

The families’ sweeping victory set in motion three trials for juries to decide how much Mr. Jones must pay the families in compensatory and punitive damages.

In the first trial, a jury in Austin, Texas, in August awarded Scarlett Lewis and Neil Heslin, parents of Jesse Lewis, who died at Sandy Hook, nearly $50 million, but Texas law caps that verdict at far less.

In the current trial, the second of the three, families of eight Sandy Hook victims sued Mr. Jones in Connecticut, where state law allows for a potentially ruinous financial verdict. The families say they sued Mr. Jones to hold him to account for the online abuse, confrontation and death threats they received from people who believed his Sandy Hook lies.

Mr. Jones’s effort to defend himself on Thursday was punctuated by violations of the judge’s order barring mentions of partisan politics or politicians.

As Mr. Jones’s testimony got underway, he attempted to cast the trial in political terms, saying the most important thing to him is “crushing the globalists.” At other times he professed little knowledge of attacks on the families, the trial and the judge that he and other Infowars staff members had made on his show, and said he did not recall things he had said as recently as the previous day.

Mr. Mattei pointed out that Mr. Jones had given news conferences outside the courthouse, watched the trial online and maligned it on his show as a “kangaroo court.” He has also set up a “kangaroo court” web page to encourage viewers to financially support his legal defense.

At one point Mr. Mattei began a question to Mr. Jones by saying, “There’s going to be another mass shooting, isn’t there?”

Mr. Jones interrupted him. “Are you saying I’m going to shoot people?” he responded. “Like it’s my fault, people think I killed the kids. And that’s my answer to you.”