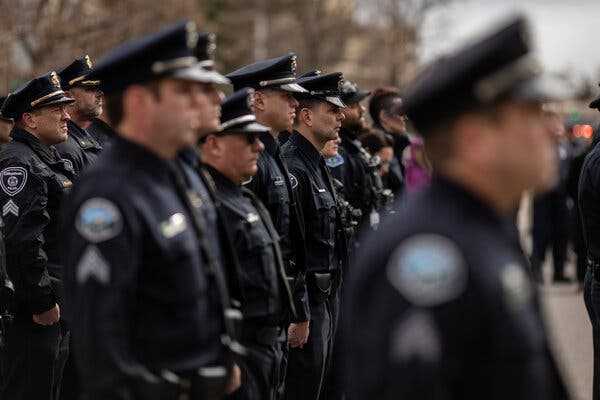 The House on Thursday passed legislation to increase funding for local police departments, but progressives initially balked at sending money to police departments without stronger accountability measures to address excessive use of force or other misconduct.

WASHINGTON — The House on Thursday passed bipartisan legislation to increase funding for local police departments, after Democrats overcame bitter divisions in their ranks over a package aimed at blunting Republican efforts to portray them as soft on crime ahead of midterm elections.

A broad bipartisan majority voted, 360 to 64, in favor of the centerpiece of the four-bill package, called the Invest to Protect Act, which would give $60,000,000 a year for five years to local police departments. The funds could be used for purchasing body cameras and conducting de-escalation training, as well as other activities.

But a backlash by progressives, who balked at sending money to police departments without stronger accountability measures to address excessive use of force or other misconduct, nearly tanked the bills before they could be considered.

The fate of the legislation is unclear, particularly given its bumpy road to House passage on Thursday. The Senate last month passed a different version of the Invest to Protect Act, and aides said leaders in that chamber had yet to discuss a path to get it to President Biden’s desk.

Democrats who are in difficult re-election races in conservative-leaning districts had clamored for action on the measures for months, in part to answer a central line of attack Republicans have used against them during the midterm campaign season: that their party is soft on crime and bent on defunding the police.

“Around the country, this is going to send a very clear signal that Democrats support law enforcement,” said Representative Josh Gottheimer, Democrat of New Jersey and the sponsor of the Invest to Protect Act.

Still, its path to passage exposed lingering divisions among Democrats on the issue of policing at a moment when the political map is looking more favorable for them than it did just a few months ago. After progressives threatened for weeks to block the legislation from reaching the House floor, Democratic leaders believed they had finally reached a deal to move forward.

But the agreement appeared to fray before their eyes just as the House turned to the bill on Thursday morning, prompting a two-hour delay as a small group of liberal lawmakers said they would not supply their votes after all.

“It’s a matter of unchecked, unmonitored money,” said Representative Cori Bush, Democrat of Missouri, who opposed the legislation. “This is money for training? Well, we have not seen this training. After all the protests, after George Floyd and Breonna Taylor, 2021 saw the most police murders since police murders have been recorded.”

The mini-rebellion in the House, where Democrats have a slim margin of control, prompted a scramble by Speaker Nancy Pelosi and her lieutenants, who quickly went to work trying to swing the would-be defectors.

Ultimately, Democrats were able to convince Representative Ayanna S. Pressley, Democrat of Massachusetts, to vote “present” in order to secure the votes need to bring up the legislation — allowing it to move ahead without registering her support for it. That allowed a procedural measure to pave the way for the legislation to squeak through on a vote of 216 to 215.

Representative Ilhan Omar, Democrat of Minnesota and a progressive who pressed for changes in the bill, said the process was so fraught, it felt as if “we were in labor, taking the last push.”

She added, “I think it should be looked at as a victory for Democrats to be able to push this in the finish line.”

Mr. Gottheimer dismissed the drama as “inside baseball” that the public would ignore. But it was the latest chapter in a long-running feud among Democrats about how to talk about and address law enforcement issues.

Although 153 Republicans supported the centerpiece Invest to Protect Act — nine Democrats broke ranks to oppose it — most Republicans opposed the other three bills. One of those would create a grant program for states and local governments to train and dispatch mental health professionals, rather than law enforcement officers, to respond to emergencies involving those with behavioral health needs. Just three Republicans joined 220 Democrats in support of that bill.

The package of bills also would provide federal grants for communities that practice violence intervention and prevention. It would offer assistance to law enforcement specifically addressing gun crimes and supporting shooting victims.

Democrats had originally hoped to vote on the police funding bills over the summer and were planning to pair them with legislation to ban assault weapons that passed in July, before lawmakers left Washington for their August recess. But when disagreements emerged about accountability measures in the police bills, Ms. Pelosi chose to move ahead with just the assault weapons ban and revisit the law enforcement legislation in the fall.

Over the past few weeks, frustration had been building among moderates as the legislation languished without a vote, especially with midterm elections approaching.

In intensive talks this week between Representative Pramila Jayapal, Democrat of Washington and chairwoman of the Congressional Progressive Caucus, Ms. Omar and Mr. Gottheimer, the liberal members pushed for changes. The bill had originally targeted police departments with 200 officers or fewer. Ms. Jayapal and Ms. Omar pressed for the money to be available only to departments with 125 or fewer officers.

The two lawmakers also insisted on more accountability measures, such as allowing the funding to be used to collect data on the use of force and de-escalation training. Many local governments cite resource constraints in being able to report those statistics, and only 27 percent of police departments currently submit that kind of data to the F.B.I.

ImageMiami-Dade police officers participate in an active shooter drill at a high school. Republicans accuse Democrats of being soft on crime and bent on defunding the police.Credit…Cristobal Herrera-Ulashkevich/EPA, via Shutterstock

Progressives also insisted on removing from the package legislation that would expand police departments, co-sponsored by Representative Abigail Spanberger, Democrat of Virginia, who has been a chief proponent of action on law enforcement funding measures.

Although the changes were made, they failed to placate some civil rights groups, who said they remained opposed to the legislation. Suggestions earlier this year to address qualified immunity, which provides legal protections for officers accused of violating others’ constitutional rights, for instance, were rejected.

“Congress should advance an affirmative agenda for safety that makes evidence-based, preventative investments in people and communities,” said Thea Sebastian, the director of policy at Civil Rights Corps, a nonprofit organization focused on injustice in the legal system. “The current package, in our view, does not represent this agenda.”

Democrats have long been aware that the issue of crime remains a political vulnerability for members representing moderate districts.

The Democratic Congressional Campaign Committee shared guidance in March with members and candidates about how to respond to Republican attacks that they are soft on crime.

“All Democratic candidates in competitive elections must proactively develop plans to counter this attack,” the memo, shared by a D.C.C.C. official, said. “Republicans will seek to tie every Democrat to ‘defund’ regardless of that Democrat’s record or biography. They are doing this because, sadly, these attacks can work even when they’re obviously false.”

The group noted, “Multiple responses were tested, and the most effective one included both a clear statement opposing defunding the police, as well as a statement laying out what Democrats do support when it comes to crime and policing.”

On Thursday, Republicans in the House accused Democrats of simply bringing the bills to the floor as a political exercise.

“It is not to solve a problem,” said Representative Michelle Fischbach, Republican of Minnesota. “It is so my Democratic colleagues can look like they are solving problems.” She called it a “last-ditch effort for them” that was “coming just in time to see the results from election polling.”

Representative Jim Jordan, Republican of Ohio, summed up the Republican opposition in remarks on the floor.

“It’s an election-year ploy for Democrats to try to look like they care about funding law enforcement,” he said.

“If you could ever be fed up, I am fed up,” she said. Addressing her Republican colleagues, she said, “Where were you on Jan. 6, when law enforcement were bleeding out on the steps of the United States Capitol?”