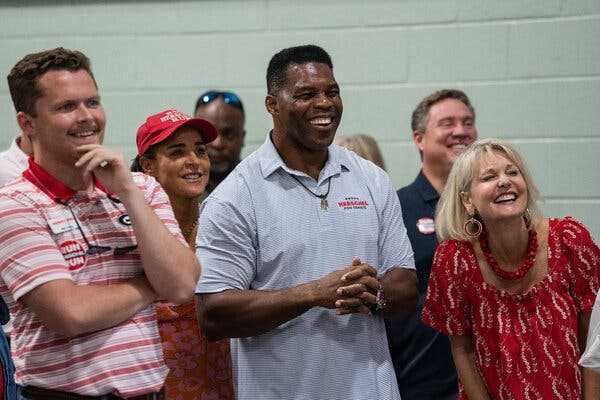 Herschel Walker at a state Republican Party event in Perry, Ga., last month. As a business owner, he pledged that 15 percent of his company’s profits would go to charities.

Back when he was a businessman running a food-distribution company, Herschel Walker, the Republican candidate for Senate in Georgia, said his company offered its customers more than just burgers and hot wings.

“You are not just serving delicious, appealing food … you’re teaming up with Herschel, in an effort to level life’s playing field for those in need,” his company website once read.

Mr. Walker, a former football star, pledged that 15 percent of profits would go to charities, a promise the company said was “part of its corporate charter.” For years, Mr. Walker’s company named four specific charities as beneficiaries of those donations, including the Boy Scouts of America and the National Multiple Sclerosis Society.

But there is scant evidence that Mr. Walker’s giving matched those promises. When The New York Times contacted those four charities, one declined to comment and the other three said they had no record or recollection of any gifts from the company in the last decade.

“Herschel has been supportive verbally. I don’t think he’s given us any money,” said Jim Baugh, the founder of a now-defunct charity called the PE4Life Foundation. As late as 2017, one of Mr. Walker’s companies cited that foundation as a recipient of corporate donations, but Mr. Baugh said his foundation ceased operations in 2014.

Mr. Walker’s Senate campaign declined to say when, how or even if Mr. Walker’s company had made the donations it promised. A campaign spokesman, Will Kiley, said in a short written statement, “Herschel Walker has given millions of dollars to charities,” but he declined to provide details.

The Times’s reporting did not conclusively prove that Mr. Walker’s company failed to donate profits. It is possible that his company donated to other charities without naming them in public. It is difficult to know for certain that any company or group did not donate to a charity, because these are more than a million charities in the United States, and many do not disclose their donors.

Mr. Walker, who is facing Senator Raphael Warnock, a Democrat, in his first bid for public office, has been dogged by repeated instances in which he was found to have given misleading or outright false details about his life story.

He falsely claimed to have graduated “in the top 1 percent” of his class at the University of Georgia, when in fact he had not graduated at all: He left the university after his junior year to play professional football. He also said he had “worked in law enforcement” when he had not.

And Mr. Walker said in 2020 that his food-distribution company, Renaissance Man Food Services, employed about 800 people. Earlier that year, it had listed just eight employees when it applied for and received a $111,300 loan from a federal program to assist companies through the pandemic.

Democrats have cast Mr. Walker as a fabulist. “At this point, it’s clear that pretty much everything Herschel Walker says bears no resemblance to the truth,” Dan Gottlieb, a spokesman for the Democratic Party of Georgia, said in a written statement.

Mr. Walker, a Heisman Trophy winner at the University of Georgia in 1982, retired from football in 1997 and began a career in business. He now owns a holding company, H. Walker Enterprises, which owns Renaissance Man Food Services, according to court records and Mr. Walker’s Senate financial disclosures.

According to its website, the company sells food through brands like “Herschel’s Famous 34,” whose website offers 10-pound cases of chicken wings to customers like hospitals and sports bars. The company also sells merchandise with corporate logos under the brand “34 Promotions,” named after Mr. Walker’s football jersey number.

Beginning around 2007, Mr. Walker and his companies began to describe a corporate policy of donating profits.

“Fifteen percent of all my company profits go to charity,” Mr. Walker said in a magazine interview in 2009. “As a person who was blessed, I think it’s my responsibility to share the blessing with others.”

In some instances, Mr. Walker or his companies did not use the 15 percent figure and instead just said “a percentage” went to charity.

Mr. Walker’s companies are private, so there is no public accounting of their profits. But, in financial disclosures required for his Senate run, Mr. Walker indicated that they produced a healthy income: He reported $3 million in “partnership distributions” from H. Walker Enterprises and $214,000 in salary from Renaissance Man Food Services.

The Times was unable to reach Mr. Walker’s company directly. The phone number listed on its website has been disconnected, and the company did not respond to messages sent through the site.

It was unclear what Mr. Walker’s company meant when it said a practice of making donations was written into its corporate charter. Public records from Delaware — where both H. Walker Enterprises and Renaissance Man Food Services were created in 2002 — show no sign of such a pledge. Instead, both companies were created with a one-page “certificate of formation” that listed their name and address but said nothing about charitable giving.

From 2007 to 2017, Mr. Walker’s companies identified the same four charities — the National Multiple Sclerosis Society, the Special Olympics, PE4Life programs, the Boy Scouts of America — and others who were unnamed as among the recipients of charitable donations, according to archived versions of their websites.

ImageMr. Walker signed an autograph at a PE4Life Foundation event in 2003. “Herschel has been supportive verbally. I don’t think he’s given us any money,” Jim Baugh, the founder, said.Credit…Tom Williams/Roll Call, via Getty Images

In response to queries from The Times, the Special Olympics declined to say if Mr. Walker or his companies had ever donated, citing internal rules about donor privacy.

The spokesman said, however, that he could not rule out the possibility that Mr. Walker had given to one of the Boy Scouts’ 250 local councils. The Times also reached out to local Boy Scout chapters in two places with connections to Mr. Walker — a council in North Texas, where Mr. Walker lived for many years, and a council in Savannah, Ga., where H. Walker Enterprises is based.

Both said they had not received any donations from Mr. Walker or his companies.

At the National Multiple Sclerosis Society, officials said they had received gifts from Mr. Walker, but not in the last decade. The group’s records showed that Mr. Walker had donated $860 in 2005 and Renaissance Man Food Services gave another $1,000 in 2006. At the time, Mr. Walker was leading a bike team that raised money from a broader pool of donors — in all, the society said, Mr. Walker helped raise $39,525 in 2005 and 2006.

But the group could find only one donation since then that might have come from Mr. Walker’s company: a gift of $25 from “RMFS” in 2009.

Mr. Baugh, the founder of PE4Life, said that, while he could not recall any gifts from Mr. Walker or his companies, he credited him with playing a key role in the group’s lobbying efforts. Mr. Baugh said that Mr. Walker had visited Capitol Hill to support a grant program for physical education: “You can always count on Herschel being there, every year.”

In addition to those promises, Mr. Walker made at least three other public promises to donate revenue.

In 2014, he organized two talent shows in rural Georgia called “Herschel’s Raw Talent” — intended to bring “American Idol”-style glamour to rural Georgia communities like the one where he grew up. “A portion of the proceeds from each on-site competition will be donated to the local county,” Mr. Walker promised at the time. In some interviews, he said up to 80 percent would be donated.

In the end, Mr. Walker staged “Herschel’s Raw Talent” events in just two counties. One of those, Stephens County, said it never received any donations from the talent show. The other, Laurens County, said its records did not go back that far.

In 2010, during Mr. Walker’s time as a mixed martial-arts fighter, he said he would donate the purse of one fight to a charity providing mentors in schools, run by a Dallas-area church called Oak Cliff Bible Fellowship. The church declined to say if Mr. Walker had made good on that specific promise, citing donor privacy, but confirmed that he had donated to the mentoring program in the past.

Mr. Walker’s campaign did not respond to questions about donations resulting from the “Herschel’s Raw Talent” events or the fight.

But Mr. Walker has filed financial disclosures that detail a financial flow in the opposite direction — from charities to him. Just since March, the disclosures show, three charities paid him a combined $115,000 to give speeches. One of the biggest paychecks came from a Pennsylvania retirement-home system, which paid Mr. Walker $35,000 to speak and presented him with an award honoring those who exhibit “benevolence, patriotism and service to others.”