Representative Elise Stefanik, the No. 3 House Republican, also spoke about her PAC’s success in backing female candidates, 23 of whom are running in the fall. 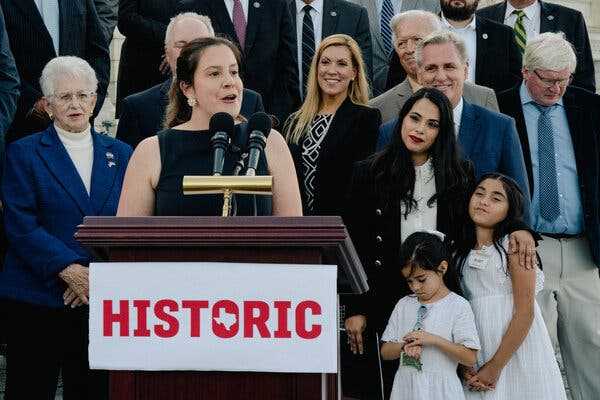 Today’s newsletter is a guest dispatch from Annie Karni, a congressional correspondent in Washington.

Representative Elise Stefanik of New York, the No. 3 House Republican, predicted on Wednesday that her party would pick up as many as three dozen House seats in November, despite signs that the red wave many predicted months ago might not form after all.

And, brushing aside concerns from many Republicans that the Supreme Court’s decision to overturn Roe v. Wade has saddled them with an unpopular position that is energizing Democrats all over the country, Stefanik told reporters defiantly at a news conference that “we will have a pro-life Republican majority in the next Congress.”

Stefanik, who was first elected in 2014 to her upstate New York seat as a relative moderate, became a star of the MAGA universe thanks to her role as President Donald J. Trump’s chief defender on the House Intelligence Committee during his first impeachment trial.

She has translated her Trump-refracted fame into a fund-raising boon for female Republican candidates she is boosting in critical House races — a move that is also helping build a base in the G.O.P. House conference for a politician with big ambitions.

“My own experience going through impeachment No. 1, where I played an outsized role on the House Intelligence Committee — we built up a national donor list,” Stefanik said Wednesday at a briefing at the Republican National Committee about the midterm elections. “We’ve been able to have that donor list support other women candidates across the country.”

Stefanik, 38, founded her political action committee, Elevate PAC, or E-PAC, in 2018, when only 13 Republican women served in the House of Representatives. At the time, her goal was to elect more conservative women to Congress.

In 2020, 11 of the 15 House seats that Republicans flipped were won by women that E-PAC had endorsed. Today, there are 34 Republican women in the House.

During this campaign cycle, Stefanik’s organization has raised and donated more than $1 million directly to female Republican candidates, and 23 women endorsed by E-PAC are running in the general election. Since its creation, E-PAC has raised $4 million to date.

Another part of Stefanik’s aim is to help with news coverage. “One thing that is very clear to me is Democrat women get outsized coverage in the media,” Stefanik said. “They get magazine covers.” Those she helps, she said, “deserve glossy magazines as well.”

The outcome of those races will help determine Stefanik’s clout as a queenmaker in the current, Trump-controlled version of the Republican Party. Her activities are also a key part of the G.O.P.’s overall midterm strategy to expand beyond the core political base of right-wing and conservative voters with a more diverse slate.

The push to elevate female candidates comes as the Republican Party struggles to overcome political gains Democrats have made on the issue of abortion since the overturning of Roe v. Wade.

In an election year when political tensions are running high over gender and social issues, liberal groups are willing to give Stefanik only so much credit for helping to elect women.

“There are challenges that all women face in running for office,” said Christina Reynolds, a spokeswoman for Emily’s List, a group that backs Democratic female candidates who support abortion rights. “I understand why there’s a need for this on both sides of the aisle.”

But she added, “To support women’s rights, to support our freedoms, we think it’s critical that we elect Democratic, pro-choice women.”

Stefanik shrugged off questions about how the issue of abortion will affect the midterms. Her party has struggled to unite behind a strategy on a fraught social issue that is reshaping campaigns across the country and, in some cases, forcing Republicans to backpedal on hard-line positions they took to win their primaries.

“On the issue of abortion, Democrats are working overtime to force the American people to rethink what their top priorities are,” Stefanik said. “In every poll, inflation is the No. 1 issue. In my district, Second Amendment issues are second. Our candidates know how to communicate on this issue.”

Stefanik also emphasized that many of the candidates she is backing are mothers. “I think that’s a very compelling message to voters,” she said, noting that one congressional candidate in Ohio, Madison Gesiotto Gilbert, gave birth just days ago.

E-PAC’s slate of candidates includes seven who are Hispanic, four who are veterans and one who is Black. Stefanik said it was the most diverse group of candidates her PAC had supported to date.

Stefanik said she had no ideological litmus test for candidates to gain her organization’s financial backing and endorsement.

This cycle, she has backed candidates who falsely claim that Trump won the 2020 election, like Karoline Leavitt in New Hampshire’s First Congressional District and Yesli Vega in Virginia’s Seventh District.

Vega has come under attack for questioning on tape whether a woman was less likely to become pregnant after a rape.

Stefanik also supported Representative Mayra Flores, who won a special election in Texas’s 34th District after saying, falsely, that the Jan. 6 riot at the Capitol was stoked by members of Antifa and used a hashtag associated with the QAnon conspiracy theory in tweets that were later deleted.

Stefanik simply interviews candidates who are able to raise $250,000 in their first quarter, she said, and decides which of them have what it takes, based on her gut feeling and experience.

“I interview and talk with everyone,” she said. “I put candidates through their paces. I ask how they would answer certain questions from the media.”

After meeting hundreds of candidates across the country over the years, she said, “I’m able to tell pretty quickly, No. 1, if they have the fire in the belly, and also if they’re speaking from the heart on behalf of their district. I don’t do any ideological litmus test. These are all strong, conservative Republicans.”

ImageKaroline Leavitt with Senator Ted Cruz before her primary. “When you start your campaign as an outsider, you’re looking for that early support and help,” Leavitt said of Stefanik’s political action committee.Credit…Brian Snyder/Reuters

In some cases, Stefanik’s endorsements have put her at odds with leadership. She endorsed Leavitt, a 25-year-old hard-right Republican who served as an assistant in Trump’s White House press office before winning the G.O.P. nomination for a House seat in New Hampshire. Representative Kevin McCarthy, the House minority leader, was backing Leavitt’s rival, Matt Mowers, in the primary.

“When you start your campaign as an outsider, you’re looking for that early support and help,” Leavitt said on Wednesday, joining Stefanik briefly as an example of an E-PAC success story. She said that Stefanik, whom she once worked for, was “someone that I leaned on, not only for financial support through E-PAC but also for advice and support.”

Republicans are expected to win back control of the House next year, although in recent weeks, the political winds that once favored them have shifted toward Democrats.

Still, for Democrats to retain a majority, they will have to hold virtually all their tossup districts in addition to flipping some tossup seats Republicans currently hold.

Stefanik said she remains bullish about a red wave.

“I remember on election night in 2020 when people said Nancy Pelosi would pick up 15 seats,” she said, referring to the House speaker. “Well, Republicans picked up 15 seats.”

She added: “Eighty percent of their dollars are on defense. Do I think we have the opportunity to earn that historic majority of 35 seats? I do. I’ve always thought that this cycle.”