Convicted in a fraud case that took down an attorney general, he successfully appealed, and later defended himself in a related case. 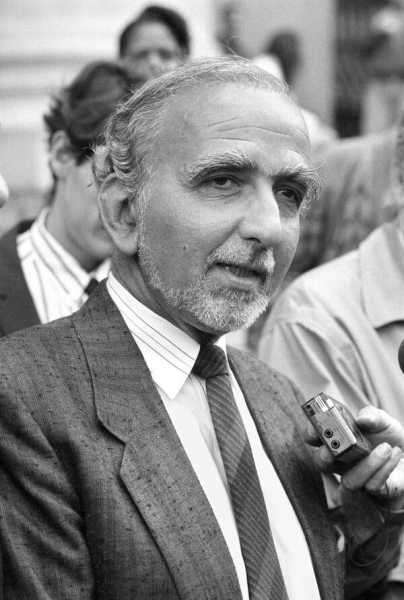 The lawyer E. Robert Wallach leaving Federal District Court in Manhattan after being convicted of fraud in 1989 for his role in the Wedtech scandal. He was sentenced to six years in prison. The case was thrown out on appeal.

E. Robert Wallach, whose career as a heavyweight trial lawyer in California was overshadowed by his connection to one of the biggest corruption scandals to hit Washington during the Reagan administration, died on May 15 at his home in Alameda, Calif., near Berkeley. He was 88.

His daughter Nancy Garvey confirmed the death but did not specify the cause.

Almost from the moment he graduated at the top of his law school class from the University of California, Berkeley, Mr. Wallach was widely considered one of the best personal injury lawyers in California.

It wasn’t his preferred field: The child of factory workers in New York, he had dreamed of entering labor law, but there were no jobs available. Instead, by the 1970s he was known for winning headline-making verdicts, including one of California’s first million-dollar medical malpractice judgments.

He was known for his eccentricities. He preferred to spell his full name with all lowercase letters — friends called him “lowercase bob” — and in 1976 he ran for the United States Senate on a platform calling for the decriminalization of marijuana. (He dropped out before the primary.)

So it came as a shock to many when, in the early 1980s, he shuttered his practice and moved to Washington to become an unofficial adviser to Edwin Meese III, a close friend since law school who had become a counselor to President Ronald Reagan. Mr. Meese had been teaching at the University of San Diego, but Mr. Wallach encouraged him to enter the administration.

At a going-away lunch in San Francisco, Mr. Wallach told a group of lawyers and judges that he could be their door to the White House. To some, it was a cynical move to cash in on his sudden proximity to power. But Mr. Wallach insisted that he was just trying to help his progressive allies during a conservative administration.

And, indeed, most of his work in Washington was pro bono, including advising a small defense contractor in the South Bronx called Wedtech. Mr. Wallach was drawn in by the company’s bootstrapping story — its founders were working-class immigrants — and he agreed to help it win a deal to make small engines for the Army.

Mr. Wallach wasn’t the only Washington figure working with Wedtech. It later emerged that the company had poured huge sums into the coffers of politicians, lobbyists and former administration officials to win big Pentagon deals, often doctoring invoices to hide bribes.

It worked: Wedtech soon had $250 million in contracts. But prosecutors got wind of the company’s maneuverings, and in 1986 began charging company executives and top Washington figures with a long list of crimes.

By then Mr. Meese was President Reagan’s attorney general, and Mr. Wallach was on retainer with Wedtech. Along the way Mr. Wallach had persuaded Mr. Meese to hire a financial adviser named W. Franklyn Chinn to handle his nest egg in a blind trust; Mr. Chinn, as it happened, was a member of the Wedtech board.

Wedtech went bankrupt in 1986, and the next year Mr. Wallach, Mr. Chinn and another associate were indicted on 18 charges, including mail fraud, securities fraud and conspiracy to defraud the U.S. government.

The Iran-contra affair remains the defining scandal of the late Reagan era, but the Wedtech case was similarly calamitous. It led to the conviction of more than a dozen people, including Lyn Nofziger, Reagan’s former press secretary (whose conviction was overturned on appeal).

ImageMr. Wallach, right, with his lawyer, Gary Naftalis, outside Federal District Court in Manhattan in 1989. Mr. Wallach would later successfully represent himself in a second case.Credit…John Sotomayor/The New York Times

Mr. Meese had already weathered several scandals, and by 1988 bipartisan pressure was building on him to resign. Even though an independent counsel declined to charge him with a crime, the counsel’s report castigated him for ignoring the spirit of government ethics laws. He finally resigned in August 1988.

Mr. Wallach insisted that he was a victim, an idealistic naïf manipulated by Wedtech executives. “I have found I am such a babe in the woods,” he told The Washington Post in 1987.

Still, he was convicted of fraud in 1989 and sentenced to six years in prison.

He appealed, and he became something of a cause célèbre among lawyers on both the left and the right who believed the case was politically motivated, using Mr. Wallach to get at Mr. Meese or even Reagan. The conservative jurist Robert Bork organized his defense; Dennis P. Riordan, who had defended Black Panthers in California, joined the effort.

This time, Mr. Wallach decided to defend himself — a risky decision, especially given the legal firepower being brought against him by the Southern District of New York, led at the time by Rudolph Giuliani.

The case dragged on for two years, but Mr. Wallach prevailed. In 1993, with the jury deadlocked, the Department of Justice decided to drop it.

Mr. Wallach was legally clear but financially ruined. It had been almost a decade since he had a regular stream of income, the case had drained his savings, and, especially back in California, his reputation was in tatters.

Undeterred, he returned to the Bay Area. He was soon winning cases and rebuilding his reputation; over the course of his 58-year career, he took 283 cases to verdict and lost just 14 of them.

He taught at several Bay Area law schools and mentored dozens of young lawyers, offering courtroom tips and impressing upon them the importance of mastering the craft of trial litigation.

“He said that every trial was a great drama dominated by the hidden truths of human nature,” Robert J. Giuffra Jr., a close friend who is a lawyer at Sullivan & Cromwell, said in a phone interview. “By most people’s accounts, Bob was considered one of the greatest trial lawyers of his generation.”

ImageMr. Wallach in an undated photo. “By most people’s accounts,” a colleague said, “Bob was considered one of the greatest trial lawyers of his generation.”Credit…Sam Willard via Rains Lucia Stern St. Phalle & Silver, PC

Eugene Robert Wallach was born on April 11, 1934, in Manhattan. His parents, Ben and Eva (Lowenstein) Wallach, had met as laborers at a hat factory in Harlem. They divorced when Bob was 7, after which he and his mother moved to Los Angeles.

A high school teacher introduced him to debate, and he was good enough to win a full scholarship to the University of Colorado. He later transferred to the University of Southern California, where he graduated in 1955. He worked throughout college and law school; while at Berkeley, he worked in a cannery.

He met Mr. Meese during their third year, where they were both on the mock trail team. Though they were political opposites, they became close friends. When Mr. Wallach's wife, Barbara, was hospitalized, the Meeses cared for the Wallachs’ three daughters; later, when the Meeses’ son died in a car crash while they were out of town, Mr. Wallach identified his body.

Mr. Wallach’s marriage ended in divorce. Along with his daughter Nancy, he is survived by two other daughters, Jamie Wallach and Bonny Wallach, and seven grandchildren.

Mr. Wallach began his career at Walker & Downing, a San Francisco firm, and struck out on his own in 1971. While in Washington, he was appointed to the U.S. Advisory Commission on Public Diplomacy and was later, named ambassador to the United Nations Human Rights Commission.

He worked as hard after his return from Washington as he had before, if not harder. He spent a decade as senior counsel to the Sharper Image, and in 2012 and 2013, at an age when most lawyers retire, he spent 134 days in court, working on three trials. In 2016 he became senior counsel at Rains Lucia Stern St. Phalle & Silver.

He never regretted the time he spent in Washington, but he did express remorse for encouraging Mr. Meese to join the Reagan administration.

“Ed agonized over whether to go to Washington,” he told The Washington Post. “I regret to this day whatever role I played.”