The special counsel appointed by the Trump administration to examine the Russia investigation seems to be wrapping up its work with no further charges in store. 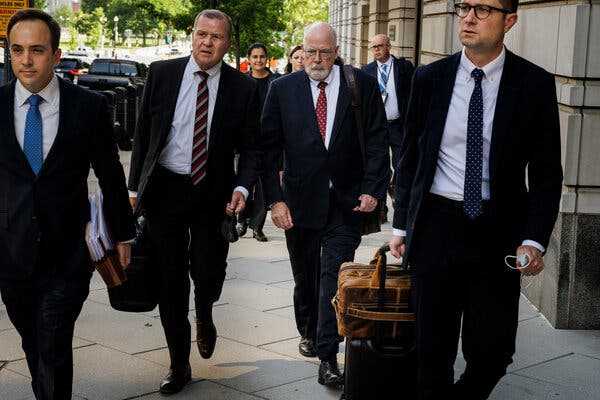 John H. Durham, center right, the special counsel examining the origins of the Russia investigation, will deliver a final report this year. Attorney General Merrick B. Garland will ultimately decide whether to make its findings public.

WASHINGTON — When John H. Durham was assigned by the Justice Department in 2019 to examine the origins of the investigation into the 2016 Trump campaign’s ties to Russia, President Donald J. Trump and his supporters expressed a belief that the inquiry would prove that a “deep state” conspiracy including top Obama-era officials had worked to sabotage him.

Now Mr. Durham appears to be winding down his three-year inquiry without anything close to the results Mr. Trump was seeking. The grand jury that Mr. Durham has recently used to hear evidence has expired, and while he could convene another, there are currently no plans to do so, three people familiar with the matter said.

Mr. Durham and his team are working to complete a final report by the end of the year, they said, and one of the lead prosecutors on his team is leaving for a job with a prominent law firm.

Over the course of his inquiry, Mr. Durham has developed cases against two people accused of lying to the F.B.I. in relation to outside efforts to investigate purported Trump-Russia ties, but he has not charged any conspiracy or put any high-level officials on trial. The recent developments suggest that the chances of any more indictments are remote.

After Mr. Durham’s team completes its report, it will be up to Attorney General Merrick B. Garland to decide whether to make its findings public. The report will be Mr. Durham’s opportunity to present any evidence or conclusions that challenge the Justice Department’s basis for opening the investigation in 2016 into the links between Mr. Trump and Russia.

Mr. Durham and his team

used a grand jury in Washington to indict Michael Sussmann, a prominent cybersecurity lawyer with ties to Hillary Clinton’s campaign. Mr. Sussman was indicted last year on a charge of making a false statement to the F.B.I. at a meeting in which he shared a tip about potential connections between computers associated with Mr. Trump and a Kremlin-linked Russian bank.

Mr. Sussmann was acquitted of that charge at trial in May.

A grand jury based in the Eastern District of Virginia last year indicted a Russia analyst who had worked with Christopher Steele, a former British spy who was the author of a dossier of rumors and unproven assertions about Mr. Trump. The dossier played no role in the F.B.I.’s decision to begin examining the ties between Russia and the Trump campaign. It was used in an application to obtain a warrant to surveil a Trump campaign associate.

The analyst, Igor Danchenko, who is accused of lying to federal investigators, goes on trial next month in Alexandria, Va.

In the third case, Mr. Durham’s team negotiated a plea deal with an F.B.I. lawyer whom an inspector general had accused of doctoring an email used in preparation for a wiretap renewal application. The plea deal resulted in no prison time.

Mr. Trump and his allies have long hoped that Mr. Durham would prosecute former F.B.I. and intelligence officials responsible for the Russia investigation, known as Crossfire Hurricane. Mr. Trump has described the investigation as a witch hunt and accused the F.B.I. of spying on his presidential campaign.

What to Know About the Trump Investigations

Numerous inquiries. Since former President Donald J. Trump left office, he has been facing several civil and criminal investigations into his business dealings and political activities. Here is a look at some notable cases:

Classified documents inquiry. The F.B.I. searched Mr. Trump’s Florida home as part of the Justice Department’s investigation into his handling of classified materials. The inquiry is focused on documents that Mr. Trump had brought with him to Mar-a-Lago, his private club and residence, when he left the White House.

Jan. 6 investigations. In a series of public hearings, the House select committee investigating the Jan. 6 attack laid out a comprehensive narrative of Mr. Trump’s efforts to overturn the 2020 election. This evidence could allow federal prosecutors, who are conducting a parallel criminal investigation, to indict Mr. Trump.

Georgia election interference case. Fani T. Willis, the Atlanta-area district attorney, has been leading a wide-ranging criminal investigation into the efforts of Mr. Trump and his allies to overturn his 2020 election loss in Georgia. This case could pose the most immediate legal peril for the former president and his associates.

New York State civil inquiry. Letitia James, the New York attorney general, has been conducting a civil investigation into Mr. Trump and his family business. The case is focused on whether Mr. Trump’s statements about the value of his assets were part of a pattern of fraud or were simply Trumpian showmanship.

Manhattan criminal case. Alvin L. Bragg, the Manhattan district attorney, has been investigating whether Mr. Trump or his family business intentionally submitted false property values to potential lenders. But the inquiry faded from view after signs emerged suggesting that Mr. Trump was unlikely to be indicted.

Last month, in the days after the F.B.I. obtained a search warrant to seize boxes of classified and other government documents he was keeping at his resort in Florida, Mr. Trump used social media to amplify the unsubstantiated idea that Mr. Durham had uncovered a vast political conspiracy by the Obama administration and the intelligence community to damage him.

At the same time, the former president seemed to acknowledge a lowering of expectations, from indictments to a report.

“The public is waiting ‘with bated breath’ for the Durham Report, which should reveal corruption at a level never seen before in our country,” Mr. Trump wrote.

In May 2019, Mr. Durham was selected by the attorney general at the time, William P. Barr, to review the origins of Crossfire Hurricane, an investigation that was eventually completed by Robert S. Mueller III, the special counsel appointed to oversee it. The Mueller report scrutinized numerous links between Trump campaign associates and Russia, but did not find a criminal conspiracy.

Mr. Durham’s review eventually evolved into a criminal investigation, allowing him to issue grand jury subpoenas to gather documents and interview witnesses. Shortly before the 2020 election, Mr. Barr made him a special counsel, permitting him to stay in place even after Mr. Trump left office.

Mr. Garland has met with the Durham team a handful of times, and a top official in the deputy attorney general’s office regularly checks in with Mr. Durham on the investigation’s progress.

Early this year, Justice Department leadership asked Mr. Durham to issue a report on his findings in May. That timing slipped, and now Mr. Durham is aiming to submit his report to Mr. Garland after the election, the people familiar with the matter said.

The assignment Mr. Barr gave to Mr. Durham faced difficulties from the beginning.

In late 2019, Mr. Horowitz delivered a report that uncovered significant problems with the F.B.I.’s applications for wiretap orders targeting Carter A. Page, a former Trump campaign adviser with numerous ties to Russia. But it also concluded that the investigation as a whole had a proper legal basis, and that there was no evidence that “political bias or improper motivation” had led the F.B.I. to open it.

Mr. Durham issued an unusual public statement saying without explanation that he disagreed with the inspector general report’s conclusion that Crossfire Hurricane had been properly opened. Mr. Horowitz later told Congress that Mr. Durham had told him he thought it should have been opened as a “preliminary” investigation rather than a “full” one.

Mr. Horowitz’s investigation also discovered an F.B.I. lawyer’s doctoring of the email used in preparation for a wiretap renewal application. He referred the matter for prosecution, and Mr. Durham’s team negotiated the resulting plea deal.

In an initial period, Mr. Durham seemed to be searching for signs of political bias among the F.B.I. officials Mr. Horowitz had already scrutinized and hunting for wrongdoing among intelligence agencies outside Mr. Horowitz’s jurisdiction. But those efforts did not result in charges.

In 2020, a top prosecutor and longtime confidante of Mr. Durham at the U.S. attorney’s office in Connecticut abruptly quit the team.

Although the charges Mr. Durham brought against both Mr. Sussmann and Mr. Danchenko last fall were narrow, Mr. Durham used the indictments to argue that the F.B.I. was deliberately ignoring information that cut against the idea that Mr. Trump and his associates had improperly worked with Russia.

Mr. Horowitz’s report, however, showed that the F.B.I. had not opened the Russia investigation on the basis of the Steele dossier — contrary to claims by Mr. Trump’s supporters.

The coming trial of Mr. Danchenko will give Mr. Durham another opportunity to scrutinize aspects of the F.B.I.’s Russia investigation.

Andrew DeFilippis, a prosecutor who played a key role in the Sussmann case, has notified the court that he will not take part in the trial of Mr. Danchenko. Mr. DeFilippis has told colleagues that he is leaving for a job at the law firm of Sullivan & Cromwell.

Reached at his desk at the U.S. attorney’s office in Manhattan last week, Mr. DeFilippis declined to comment.