Democrats are defending more than a dozen seats in which the incumbent has said they will not run for re-election, complicating their effort to stop Republicans from reclaiming the House majority. 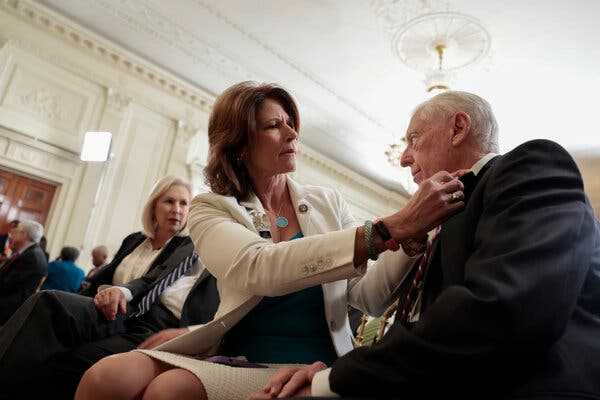 Representative Cheri Bustos and Steny Hoyer, the House majority leader, in March. Ms. Bustos is retiring at the end of her term.

WASHINGTON — Hurrying from the House floor to a waiting car on a recent afternoon, Representative Cheri Bustos, Democrat of Illinois, rattled off an exhaustive analysis of her conservative-leaning district one minute flat, listing the number of family-owned farms in the area and landing on the argument her party believes could save their House majority: that the Republican running for the seat has “extreme views on women’s health issues.”

It is that message discipline and deep knowledge of her western Illinois constituency that has allowed Ms. Bustos to win election five times in a district that has recently leaned conservative, supporting former President Donald J. Trump both times he ran for president.

The problem for Democrats is that Ms. Bustos is not running for re-election. She is one of more than a dozen Democratic lawmakers in competitive districts who have said they will depart Congress after this year, leaving less experienced, relatively lesser-known candidates to fight it out with a Republican to keep their seats.

In a midterm election cycle in which Democrats’ majority is at stake, the rash of retirements has complicated their efforts to hold the House, even as the political terrain has shifted in their favor in recent weeks in a surge of enthusiasm around protecting abortion rights. Instead of battle-tested incumbents, first-time candidates without the inherent advantages of incumbency — name recognition, experience and fund-raising networks — are defending the districts.

Political handicappers expect at least six open seats alone — some of them skewed conservative by redistricting — to swing into Republican control, in Wisconsin, Texas, Arizona, Michigan and Florida. Republicans need a net gain of just five seats to win back the majority.

Elsewhere around the country, Democrats may be able to hang on to their open seats, but the incumbent exodus will make doing so more costly, leaving less money for the party to fight it out in other competitive races.

“There is a challenge that comes with these retirements,” Tim Persico, the executive director of House Democrats’ campaign arm, said in an interview. “It just means there are some places where we wouldn’t be spending money where we do have to invest a little bit more. But it’s really a resource challenge. It’s not a ‘We can’t win’ sort of thing.”

ImageRepresentative Ron Kind, left, has “run out of gas” after 13 terms in the House.Credit…Doug Mills/The New York Times

When House Democrats announced their retirements last year, the political terrain for the party looked bleak. Dreading the prospect of fighting their way out of bruising re-election battles only to be relegated to the backbenches of the minority in an increasingly toxic institution, party veterans headed for the exits, opting to retire or run for higher office.

But the political winds shifted after the Supreme Court’s decision in Dobbs v. Jackson Women’s Health, which overturned the constitutional right to an abortion, giving Democrats hope that they could stem a Republican wave. The nonpartisan analysts at the Cook Political Report downgraded its projected outlook for Republican gains last month from 15 to 30 seats to 10 to 20 seats in a post titled, “Red Wave Looks More Like a Ripple.”

That has left some Democrats privately lamenting the retirements, noting that their party could have cemented some tough seats on the map had their incumbents decided to run for re-election.

“There’s no guarantee that the Democratic incumbents who are not running again would have won in 2022 because some of them represent some Republican-leaning areas,” said Nathan Gonzales, a longtime election analyst and the publisher of Inside Elections, a political newsletter. “But they would have started from a stronger place and probably would receive a bit more help because they are sitting members of Congress who are currently on the Hill making policy.”

Representative Ron Kind, for example, was widely considered the only Democrat who could hold his seat in rural western Wisconsin. He announced his retirement in August 2021, telling reporters that after 13 terms in office holding down a conservative-leaning district that he had “run out of gas.”

“I had to face a serious job review every two years for 26 years,” Mr. Kind said.

And in Texas, Representative Vincente Gonzalez changed seats in an effort to run in a friendlier district, vacating his newly drawn South Texas seat and leaving it open to a bitter primary contest to replace him. Ultimately, his moderate would-be successor was defeated by an unabashed progressive, potentially making the seat even more difficult for Democrats to hold.

Republicans claim credit for helping to orchestrate the retirements. The Congressional Leadership Fund, the super PAC aligned with House Republican leaders, began advertising early against Democratic incumbents in competitive districts, offering a preview of the political attacks they would face in the midterms in an effort to goad them into leaving Congress. The strategy, said the group’s president, Dan Conston, “paid dividends.”

ImageG.K. Butterfield will be departing after 18 years in Congress.Credit…Anna Moneymaker/Getty Images

“Many of the best offense opportunities in the House this cycle are open seats because we’ve erased all of the incumbents’ natural advantages like resources and voter familiarity,” Mr. Conston said. “Democrats are already walking away from key open seats, and this is inevitably the first group they’ll cut off.”

Democrats argue that they recruited candidates to succeed the retiring incumbents who are already well-known in their communities, pointing to Eric Sorensen, the former television meteorologist who is running in Ms. Bustos’s seat, and Don Davis, a state senator and former mayor who is running in northeastern North Carolina to replace Representative G.K. Butterfield, who is departing after 18 years in Congress.

Mr. Sorensen, for example, has sought to emphasize his nearly two decades on local television news, making that credential the centerpiece of his first television ad.

“Neighbors look out for each other, keep each other safe,” Mr. Sorensen says in a voice-over as a clip of him giving the weather report flashes on the screen. He adds: “As your meteorologist, I helped you prepare for your day. And being born and raised here, I know how special this place is.”

And they plan to lean heavily into painting Republicans as out of step with their districts on abortion rights, an issue that has mobilized independent voters and women across the country.

“The benefit of running against Republicans is that they continuously nominate the extreme of the extremes for some of these seats,” Mr. Persico said. “That makes holding onto them that much more likely.”

But Republican candidates in several key races in open tossup seats — especially those running for Congress a second time — have significantly out-raised their Democratic counterparts, many of whom only recently emerged from competitive primary races.

That dynamic — what Mr. Persico referred to as a “resource challenge” — means that those candidates may end up relying more heavily on outside groups, such as the party’s political action committee, to finance their contests, setting up tough decisions for Democrats about where to spread a finite pool of money as House Republicans’ super PAC continues to post fund-raising records.

When Ms. Bustos prevailed in 2020, she raised more than twice as much money as her Republican opponent, bringing in about $5 million to Esther Joy King’s $2 million haul, and in the last days of the race, House Democrats’ PAC dumped $1 million into television ads against Ms. King, in a sign of just how close the contest was.

This year, Ms. King has a sizable cash advantage over Mr. Sorensen, raising just over $3 million to Mr. Sorensen’s $500,000. She had $1.8 million on hand versus Mr. Sorensen’s $115,000, according to the latest publicly available campaign report, filed at the end of June. (Mr. Sorensen won his six-way primary just two days before the report was filed; Ms. Bustos said later that more recent filings would show that he had a “very good fund-raising quarter.”)

In Mr. Kind’s district in Wisconsin, Derrick Van Orden, a former Navy SEAL who attended the Stop the Steal rally and was on the Capitol grounds during the riot on Jan. 6, 2021, has out-raised Democratic State Senator Brad Pfaff, $4,428,105 to $720,637, according to data from July.

“In terms of calculating how you win the majority, or retain the majority, second-guessing is not a factor,” Mr. Israel said. “You can’t put the genie back in the bottle. You have to be ready. You can never look back.”