Mandela Barnes, the party’s Senate candidate, is now wobbling in his race against Ron Johnson, the Republican incumbent. Democratic nominees in other states face similar challenges. 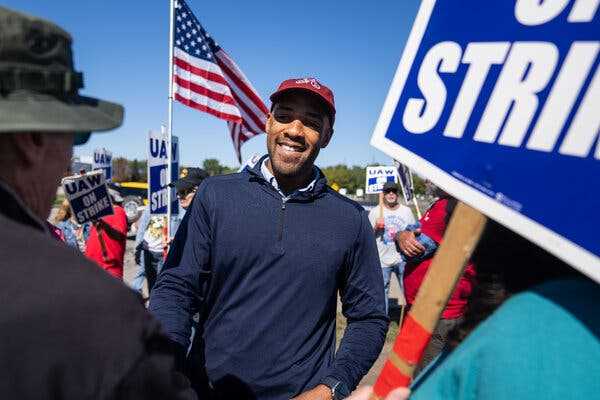 Mandela Barnes opened a lead in polls over Senator Ron Johnson in late summer, after he won the Democratic primary, but since then Mr. Johnson has risen in surveys.

But on Tuesday at Monty’s Blue Plate Diner here in Madison, one of the first people to approach Lt. Gov. Mandela Barnes, the Democratic nominee for Senate in Wisconsin, took the tradition to a new level, presenting him with a typed-up list of concerns about his campaign.

The supporter, Jane Kashnig, a retired businesswoman who has spent recent weeks going door to door to speak with voters, told Mr. Barnes his backers were jittery about his inability to repel an unending volley of attack ads from Senator Ron Johnson and his Republican allies.

Show more fire, Ms. Kashnig urged the Democrat and his campaign. “The people on the doors want him to fight,” she said.

Democrats in Wisconsin are wringing their hands about how Mr. Barnes’s political fortunes have sagged under the weight of the Republican advertising blitz. Grumbling about his campaign tactics and the help he is receiving from national Democrats, they worry that he could be one of several of the party’s Senate candidates whose struggles to parry a withering G.O.P. onslaught could sink their candidacies and cost Democrats control of the chamber.

Beyond Wisconsin, Republican Senate candidates and their allies in Pennsylvania, Nevada and Georgia have alarmed Democrats with their gains in the polls after an enormous investment in television advertising. In those three states, Republicans and their allies outspent Democrats in September, according to data from AdImpact, a media-tracking firm.

The Republican wave of ads has helped counteract the Democratic momentum that followed the Supreme Court’s decision in June to end the constitutional right to an abortion. Republicans have shifted the debate to more friendly terrain, focusing in Wisconsin and other places on crime.

“There were weeks where we would get outspent two-to-one on TV,” Mr. Barnes said in an interview. “There has been an unprecedented amount of negative spin against me.”

It has been an abrupt turnaround for Mr. Barnes since late summer, when he won the Democratic primary by acclimation and opened up a lead in polls over Mr. Johnson, who has long had the lowest approval ratings of any incumbent senator on the ballot this year. But the hail of attack ads from Mr. Johnson and allied super PACs has tanked Mr. Barnes’s standing, particularly among the state’s finicky independent voters.

Republicans have seized in particular on Mr. Barnes’s past progressive stances, including his suggestion in a 2020 television interview that funding be diverted from “over-bloated budgets in police departments” to social services — a key element of the movement to defund the police. Since then, Mr. Barnes has disavowed defunding the police and has called for an increase in funding.

Race has also been at the center of the televised assault on Mr. Barnes, who is Black. Mail advertising from Republicans has darkened Mr. Barnes’s skin, while some TV ads from a Republican super PAC have superimposed his name next to images of crime scenes.

Those overtones come as no surprise to Wisconsin Democrats. He is only the third Black statewide official in Wisconsin’s history; the first two both lost re-election in campaigns widely regarded as racist. And Democratic strategists and voters are well aware that fighting back aggressively has its dangers.

“It’s real easy to go from ‘fired up for change’ to ‘the angry Black guy from Milwaukee’ in the public perception,” said Alexia Sabor, the Democratic Party chairwoman in Dane County, which includes Madison.

For all of the Republican optimism, Mr. Barnes still has a path to victory. Wisconsin elections over the last two decades have been very close, with Donald J. Trump and Joseph R. Biden Jr. each winning the deeply polarized state by fewer than 25,000 votes in their successful presidential campaigns. And Wisconsin Democrats have a record of winning tight races: Including nonpartisan State Supreme Court elections, the party has won nine of the 10 statewide elections since 2018. Mr. Johnson is also less popular in the state now than he was when he won narrow victories in 2010 and 2016.

“I have not met somebody who’s like, ‘Oh, gee, how should I vote in the Senate race?’” said Mayor Katie Rosenberg of Wausau, a longtime friend and political supporter of Mr. Barnes. “I mean, mostly people know.”

ImageGov. Tony Evers of Wisconsin and other prominent Democrats in the state held a rally for abortion rights at the State Capitol on Tuesday. Mr. Barnes was not present.Credit…Haiyun Jiang/The New York Times

Mr. Barnes entered the primary as a favorite of the progressive wing of the Democratic Party. When he first ran for office, in 2012, he wrote on Twitter that progressive candidates who moved to the political center were “compromising all integrity.” In 2019, he delivered the Working Families Party’s response to Mr. Trump’s State of the Union address.

Mr. Barnes, 35, a former state legislator who was elected lieutenant governor in 2018, consistently led in the primary polls. Two weeks before the primary, his leading rivals dropped out and endorsed him one by one, saying they hoped to give him a runway to raise money and begin attacking Mr. Johnson.

“I gave him a two-week head start,” said Tom Nelson, the Outagamie County executive, who was the first Democratic Senate candidate to end his campaign and back Mr. Barnes.

The Republican ads have been remarkably effective. Shortly after the Aug. 9 primary, Mr. Barnes led Mr. Johnson by seven percentage points overall and by 15 points among independent voters, according to a poll conducted by Marquette University Law School. But 41 percent of voters still didn’t have an opinion about Mr. Barnes. A month later, Mr. Johnson led by a point overall and by two points among Wisconsin’s independents.

Mr. Johnson declined an interview request. In an interview with a conservative talk radio host in Milwaukee last month, Mr. Johnson accused Democrats of “playing the race card,” adding, “That’s what leftists do.”

ImageMr. Johnson has the lowest approval ratings of any incumbent senator on the ballot this year. But he has pulled out narrow victories twice before, in 2010 and 2016.Credit…Haiyun Jiang/The New York TimesImageA Barnes event in Racine, Wis. On Monday, his campaign begin airing an ad criticizing Mr. Johnson’s anti-abortion stance.Credit…Haiyun Jiang/The New York Times

Mr. Barnes, who announced on Wednesday that he had raised $20 million during the three-month fund-raising period that ended Sept. 30, has responded to Mr. Johnson with gentle advertisements in which he speaks to the camera and calmly asserts that the senator is lying about his record. In one, he is at a kitchen table making a peanut butter and jelly sandwich. Only on Monday did the Barnes campaign begin airing an ad criticizing Mr. Johnson’s opposition to abortion rights.

Some Democrats also worry that Mr. Barnes is not sufficiently motivating Black voters, a key constituency largely concentrated in Milwaukee. Most of the city’s leading Black elected officials endorsed other candidates during the Senate primary.

“The progressives have been Mandela’s base from the day that he was elected — it really has never been the Black community,” said Lena Taylor, a Black Democratic state senator from Milwaukee whom Mr. Barnes unsuccessfully challenged in a 2016 primary for her seat. “Because of that, he does have to do a little bit more with what other people would have seen as his natural base.”

Even Mr. Barnes’s longtime supporters are frustrated that his campaign has allowed Republicans to frame the contest as being about crime rather than Mr. Johnson’s past support for overturning the 2020 election and the misinformation he continues to spread about the Jan. 6, 2021, attack on the Capitol.

“To call what happened on Jan. 6 an armed insurrection, I just think is not accurate,” Mr. Johnson said on Tuesday during remarks to the Rotary Club of Milwaukee.

Senior Democrats in Wisconsin and Washington concluded long ago that condemning Mr. Johnson over Jan. 6 in television ads is not a winning argument with swing voters.

“To make Mandela and Black folks endure the relentless racist attacks, then not hit back on treason, corruption and lies, is unfortunate,” said Francesca Hong, a state representative from Madison who was an early supporter of Mr. Barnes.

In the interview with Mr. Barnes, held after a campaign stop at a brewery in Racine, he both reiterated his support for increasing funding for law enforcement and said he had not changed any progressive positions he took earlier in his political career.

“Things haven’t changed, right? But it’s what we talk about,” he said. “My positions are the same and where I stand on those issues is the exact same.”

He also said he did not believe he faced extra hurdles running to represent Wisconsin as a Black Democrat from Milwaukee — the state’s largest city but one that has long punched below its weight in statewide elections. Since 1913, when the ratification of the 17th Amendment provided for the direct election of senators, Wisconsin has elected only one from Milwaukee, Herb Kohl, who served four terms.

Perhaps the clearest sign of Mr. Barnes’s political challenges is the lack of eagerness by some of his fellow Democrats to campaign with him.

Three hours before Mr. Barnes’s stop at the Madison diner, Gov. Tony Evers, a Democrat locked in a tight re-election race of his own, held a rally on the steps of the State Capitol calling on voters to punish Republicans for refusing to consider changes to the state’s 1849 law banning abortion. Those present included the state’s attorney general, treasurer, Democratic state legislators and the state Democratic Party’s chairman.

Mr. Barnes wasn’t there, and the parade of speakers barely mentioned him.

“It wasn’t that he wasn’t invited or was invited,” Mr. Evers said afterward. “He just scheduled something different at the same time to talk about the same thing.”

Mr. Johnson, for his part, appears to be in a jubilant mood. On Wednesday, he thanked the Tavern League of Wisconsin, the state’s trade association for bars, for endorsing him by posting a video in which the 67-year-old senator chugs a Miller Lite in four seconds.