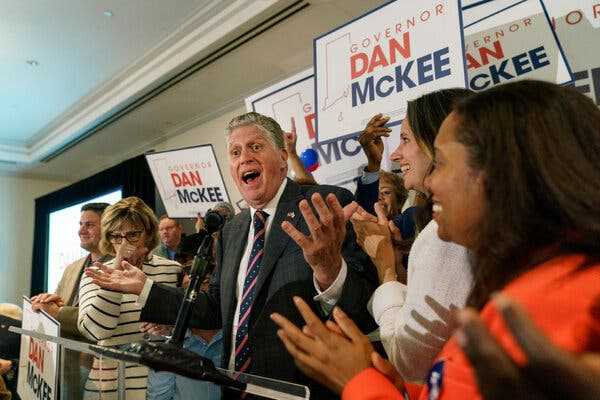 Daniel McKee, the governor of Rhode Island, has secured the Democratic nomination to run for his first full term in office, according to The Associated Press. Mr. McKee, 71, overcame four challengers in a hard-fought primary with a focus on his leadership through the Covid-19 pandemic and the economic recovery.

Mr. McKee had served as the state’s lieutenant governor since 2015 and was first sworn in as governor in March 2021, when former Gov. Gina Raimondo resigned to join President Biden’s cabinet as commerce secretary.

In the primary, he had been neck and neck with Secretary of State Nellie Gorbea, 55, with whom he was elected to statewide office in 2014 and who drew from the same well of support. But it was Helena Foulkes, 58, a former CVS executive, who came in second place after a late-breaking surge in momentum that followed a strong debate performance and an endorsement from Speaker Nancy Pelosi.

Ms. Gorbea, born and raised in Puerto Rico, had sought to become the first Latina elected governor in New England, touting her 30 years of experience as a community activist and nonprofit leader focused on addressing the state’s housing crisis. She rocked the Rhode Island political world when she won her campaign for secretary of state in 2014 with little funding or name recognition, and many expected her to do the same in the governor’s race.

But she stumbled after her campaign aired an attack ad about Mr. McKee that cited an article from a conservative commentator. Her office also was heavily criticized after new touch-screen voting machines listed the wrong candidates on the Spanish-language ballot, which led to the discarding of more than 50 ballots.

The missteps gave a small opening to Ms. Foulkes, who proved to be a prolific fund-raiser and whose mother was close friends with Ms. Pelosi. “I just want to say one word to you,” Ms. Pelosi told a crowd of more than 200 people gathered Sunday in Providence. “Helena.”

A former mayor of the town of Cumberland, Mr. McKee is not seen as a natural politician and has tended to stay behind the scenes in his political career. His campaign was clouded by state and federal investigations into a multimillion-dollar education consulting contract that his administration awarded to the ILO Group, a consulting firm to which he has ties and that was created two days after he took office.

But Mr. McKee had three factors working in his favor, said Adam Myers, an associate professor of political science at Providence College: a strong base of voters in the Blackstone River Valley, the northeast pocket of the state that he is from; an ability to consolidate the support of organized labor groups; and his appeals to Latino voters.

Mr. McKee had appointed Sabina Matos to replace him, making her the first Afro-Latina lieutenant governor and the first Dominican-American in the country to hold statewide office. He also had a star endorser — his 94-year-old mother. She became a campaign sensation when she appeared in an ad playing cards with her son in oversized sunglasses.

In the ad, Mr. McKee champions his efforts to steer the state through the pandemic, his elimination of the car tax and his signing of gun safety laws. She responds: “Not bad for a governor that lives with his mother.”