The ruling affirmed a lower court decision that deemed a program protecting about 600,000 young immigrants from deportation to be illegal but allowed current recipients to renew their status. 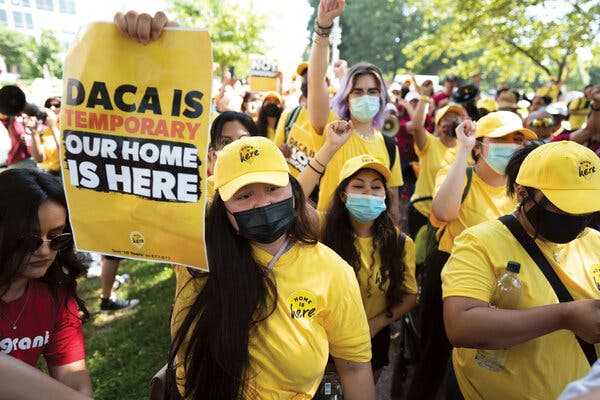 Activists have called on Congress for years to enshrine into law the Deferred Action for Childhood Arrivals program for young undocumented immigrants.

WASHINGTON — A federal appeals court panel ruled on Wednesday that a program that protects nearly 600,000 young immigrants from deportation is illegal but allowed those already enrolled to renew their status — in essence keeping the status of the program unchanged but its future uncertain.

The decision from the three-judge panel on the U.S. Court of Appeals for the Fifth Circuit — one of the country’s most conservative federal appellate courts — affirmed a 2021 lower court decision. The Biden administration will need to continue its legal fight to enroll new applicants in the program, called the Deferred Action for Childhood Arrivals, or DACA.

The judges sent the case back to Federal District Court in Houston to consider a new administration policy issued in August to protect the program. The new regulation was intended to go into effect at the end of the month.

Wednesday’s ruling was the latest turn in a series of court rulings and administration actions that over the years has canceled, reinstated or rolled back pieces of the DACA program. It has long seemed likely that the case would ultimately go to the Supreme Court.

Immigration advocates said the ruling signaled that the only chance for DACA to survive was for Congress to pass a law to protect young immigrants, something it has been unable to do for more than two decades.

“This decision makes 100 percent clear that the options for preserving DACA in the courts are dwindling and essentially nonexistent at this point,” said Jess Hanson, a staff lawyer at the National Immigration Law Center. “We really need Congress to step up.”

Democrats have been trying to preserve the Obama-era program for years.

Former President Barack Obama created DACA through executive action in 2012 after years of inaction in Congress to provide permanent protection to immigrants who were brought to the country as children, a group referred to as “Dreamers.”

It was intended as a stopgap measure to provide hundreds of thousands of young immigrants protection from deportation. The protection lasts two years at a time and is renewable, but it does not offer a path to citizenship.

Immigrants in the DACA program are on average about 26 years old, with the oldest nearing 40. Most were brought to the country from Mexico; others were born in other Latin American countries and the Caribbean. Many of the DACA recipients have been able to raise families, buy homes and work at jobs in their fields of study, but their status has been precarious for years.

In June 2020, the Supreme Court ruled against the Trump administration’s decision to terminate the program. The court did not rule, however, on whether the program had been legally adopted. One of Mr. Biden’s first actions in office was to strengthen the DACA program. But the 2021 Texas court ruling renewed the uncertainty surrounding it.

On Wednesday, the judges wrote that while they agree with the lower court that the DACA program is not legal, they “also recognize that DACA has had profound significance to recipients and many others in the 10 years since its adoption.”

The Justice Department was working with the Homeland Security Department on a response to the ruling.

“I am deeply disappointed by today’s DACA ruling and the ongoing uncertainty it creates for families and communities across the country,” Alejandro N. Mayorkas, the homeland security secretary, said in a statement late Wednesday. “I urge Congress to swiftly pass legislation to provide permanent protection to the hundreds of thousands of Dreamers who call the United States home.”

The Democrat-led Congress is running out of time to find a long-term solution, particularly if Republicans regain control of the House in the Nov. 8 midterm elections.