Ben Casselman, an economics correspondent for The New York Times, unpacks the numbers. 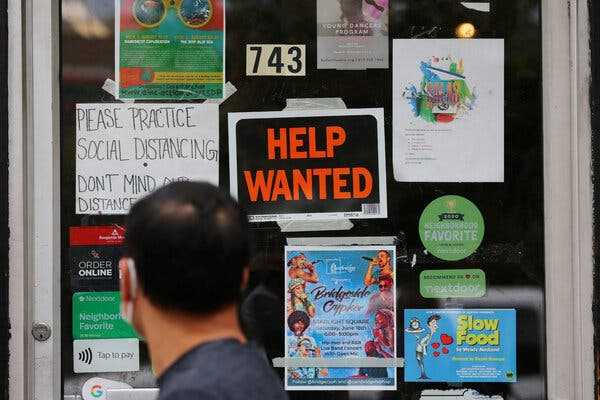 A hardware store in Cambridge, Mass., was hiring in July. Other economic signals are mixed.

If there’s one thing Democrats and Republicans absolutely cannot and never will agree on as the November midterms approach, it’s whether the U.S. economy is good or bad right now.

In a recent New York Times/Siena College poll of registered voters, for instance, 79 percent of Republicans said the economy was poor, while only 36 percent of Democrats agreed.

The federal government reported on Tuesday that prices rose 8.3 percent through August — down from 8.5 percent in July, but still an unexpectedly high figure that sent markets into a tailspin.

President Biden nevertheless hailed Tuesday’s numbers as “more progress in bringing global inflation down,” though he added that there was “more work still to do.”

How and why partisans can see the exact same economy so differently is a critical topic as we near the fall elections, which are less than two months away — and closer than that in many states that start early voting soon.

To sort out the facts from the spin, I chatted with Ben Casselman, who covers the economy for The New York Times and knows the data inside and out.

Here’s our conversation, edited for length and clarity:

So, is the U.S. economy good or bad? Democrats and Republicans can’t seem to agree on an answer.

This is a tricky question even before you get to the political side of it. The job market is good right now — arguably very good. Unemployment is low. Wages are rising. If you want a job, chances are you can get one.

Other metrics are a lot more mixed. Corporate profits have been good, but a lot of companies have said they’re seeing signs of a slowdown. Consumer spending isn’t growing very much right now, but it isn’t falling either. The stock market obviously had a very bad day on Monday, but the broader financial system isn’t showing the kinds of stresses we saw in the 2008 crisis.

If that were the whole story, we’d probably be talking about how the recovery has slowed down since last year but remains solid, and frankly you and I probably wouldn’t be having this conversation.

But of course it’s not the whole story, because of inflation. Gas prices are up. Food prices are up. Those pay increases I mentioned earlier aren’t keeping up with the cost of living. For a lot of people, that issue overwhelms everything else.

I noticed after Donald Trump was elected in 2016 that many Republicans suddenly told Gallup that the economy was great, even though nothing had changed other than the president-to-be. Have you noticed this phenomenon, too? If so, how do you explain it?

If you go back and look at polling data from the 1980s and 1990s, there didn’t used to be this big partisan split in how Americans viewed the economy.

That began to shift in the 2000s, when Republicans rated the economy as better than Democrats did during George W. Bush’s presidency, and it’s gotten wider ever since. Under Barack Obama, Democrats thought the economy was better than Republicans. As soon as Donald Trump took office, that switched. And now under President Biden, it has flipped back.

The swings are especially wide among Republicans. As you noted, the moment Trump was elected, Republicans’ assessment of the economy soared, and then their outlook cratered right after the 2020 election.

Basically, the economy is like seemingly everything else in our society in that it has become a much more partisan issue over the past couple of decades.

Are there other explanations out there besides partisanship that can account for such a wide disparity in views of the economy?

If you’re a home builder or a real estate agent, this is probably a pretty tough time for you given what’s going on in the housing market. If you’re a recent college grad entering a strong labor market and maybe about to get a bunch of your student debt forgiven, it’s a different story.

But with a few exceptions — student debt being one of them, maybe — it’s pretty tough to argue that those factors can explain the partisan differences we see. It’s not as if the Biden economy has been persistently better for Democrats than Republicans.

OK, Ben, I have to ask: What is up with inflation?

Oof. How long have you got?

The problem with talking about inflation right now is that you can say almost anything and have it be true. “Inflation is the highest it’s been in decades.” True. “Prices are falling.” Also true, at least by one measure. “Inflation is a global phenomenon.” True. “The Democrats’ policies contributed to inflation.” True, although we can argue all day about how much.

Here’s what I think we can say with confidence: Inflation soared last year, primarily for a bunch of pandemic-related reasons — snarled supply chains, shifts in consumer demand — but also at least in part because of all the stimulus money that we poured into the economy. Then, just when most forecasters expected inflation to start falling, it took off again because of the jump in oil prices tied to the war in Ukraine.

Now, inflation is falling again. Overall consumer prices were up just 0.1 percent in August, and a separate measure showed prices falling in July. But a lot of that is because of the recent drop in gas prices, which we all know could reverse at any time. So-called core inflation, which sets aside volatile food and energy prices, actually accelerated in August.

All of which means we don’t know how long the recent pause in inflation will last, and we definitely don’t know whether Biden will get credit for it if it does.

What does your read of history tell you about what we might expect the economy to do between now and November, and how voters might process any changes?

So here’s a fun fact for you: Lehman Brothers filed for bankruptcy on Sept. 15, 2008, setting off the global financial crisis. Before that, it seemed at least somewhat plausible that the meltdown in the housing market would stay confined to one sector of the economy, and that the economy could avoid a recession.

In other words, a lot can happen in two months. Economists — and journalists, for that matter — are notoriously bad at predicting recessions. Still, if you believe the forecasts, then what we’re likely to see between now and Election Day is a gradual slowdown in both inflation and the job market. So inflation will probably still be uncomfortably high, but coming down, and the job market will probably still be pretty strong, but getting weaker.

Voters tend to form their views of the economy several months before elections, so as long as we don’t see any huge shifts, I imagine that people who think the economy is bad today will still think that two months from now.

That said, if gas prices shoot back up or we get a wave of layoffs or something else fundamentally changes in the economy, it’s not hard to imagine that making a difference in a close election.

What to read tonight