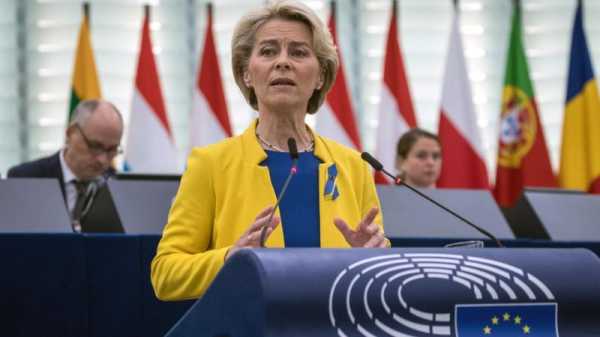 European Commission President Ursula von der Leyen gave her backing for a constitutional convention to reform the EU treaties in her State of the Union speech on Wednesday (14 September), insisting that leaders must be ‘serious’ about EU reform.

Addressing the European Parliament in Strasbourg on Wednesday (14 September), she commented, &#8220;if we are serious about a larger EU, we must also be serious about reforming it. So as this Parliament has called for (treaty change), I believe the moment has arrived for a European Convention.”

However, she offered little idea or detail on what the treaty reform process should focus on beyond a call for the treaties to enshrine “solidarity between generations”.

Demand for changes to the treaties, which were last reformed in the Lisbon Treaty which entered into force in 2009, has gathered momentum since Russia invaded Ukraine in February, with several governments complaining about the slow pace of agreeing on sanctions against the Kremlin because of the need for unanimity.

Policies requiring treaty change are also among the recommendations to emerge from the Conference on the Future of Europe, the one-year participatory democracy exercise which concluded earlier this year.

Meanwhile, the COVID-19 pandemic also prompted calls for reforms to make it easier for EU countries to co-operate during a health emergency.

A convention, bringing together representatives from the 27 national governments, does not guarantee treaty reform but is the next step in the process.

Should the EU-27 agree on the need for reform, they would then establish an Intergovernmental Conference to draw up amendments to the treaties.

“Some may say this is not the right time. But if we are serious about preparing for tomorrow’s world, we must be able to act in the areas that matter most to people,” said von der Leyen.

In June, MEPs backed a resolution urging EU governments to establish a constitutional convention, and member states are legally required to give a response by October.

Von der Leyen’s remarks were immediately welcomed by European Parliament President Roberta Metsola, who told EURACTIV that the next task was to win support from EU governments.

“This Parliament has been asking for this treaty article to be opened. Now we need a simple majority in the Council. I am going to work to get each and every government to look at the demands of the citizens,” she said.

Referring to the need to follow up on the recommendations made by EU citizens from the Conference on the Future of Europe, Metsola added that “the worst thing we could do is to look away. We cannot ask our citizens to tell us what they expect from us, only for us to say, ‘we are not going to do any of that’.

A group of governments, led by the Nordic countries, currently oppose treaty change, arguing that the EU should instead focus on dealing with the fallout from the crisis.

The Commission chief also gave her backing for a ‘European Political Community’, an idea pushed by French President Emmanuel Macron earlier this year, that would offer an alternative to full EU membership for countries ranging from ‘the UK to Ukraine’ who share EU values on trade, the rule of law and democracy.