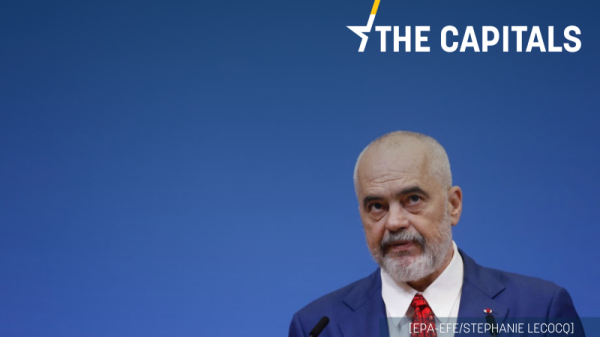 Before you start reading today’s edition of the Capitals, feel free to have a look at Power firms warn about ‘unprecedented’ liquidity crisis in Europe by Frédéric Simon.

Today’s edition is powered by Salesforce Strategic focus and external factors such as the Covid crisis have accelerated the digital transformation of the European Commission (EC). To learn more about the EC digital transformation journey and the important role of platforms read this report: Read the report>>>

Albanian authorities thwarted a second cyberattack over the weekend after Tirana, backed by the United States with pledges of support and fresh sanctions on Iran, severed all diplomatic ties with Tehran who it blames for the “sabotage”.

Macron asks Putin to withdraw weaponry from Ukrainian nuclear plant. Heavy and light weapons must be removed from the Zaporizhzhia power plant, French President Emmanuel Macron urged President Vladimir Putin in a conversation on Sunday about the plant, which is under siege from Russian forces. Read more.

Spanish wait six months for a new car. Customers now have to wait an average of six months to get a new car due to the global chips shortage compared to just a month in 2019, new data from the Spanish association of car dealers Faconauto has revealed. Read more.

Unifnished waterway to sideline Russia to open in Poland. A new channel connecting the Vistula Lagoon with the Gulf of Gdańsk is to be launched on Saturday (17 September), even though it is currently unfinished. Read more.

Thousands march in Belgrade against EuroPride. Thousands of religious and right-wing activists marched through Serbia’s capital on Sunday, calling for authorities to ban EuroPride, which is scheduled for next weekend despite being cancelled by the government. Read more.