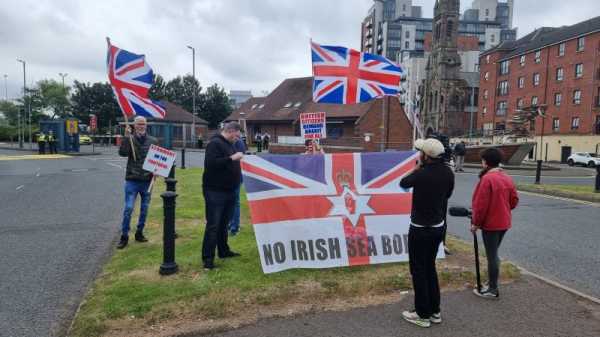 UK Prime Minister Liz Truss has set an April 2023 deadline for negotiating a settlement with the EU on the Northern Ireland protocol following talks with US President Joe Biden.

After the meeting on Wednesday (21 September), UK officials revealed that a planned state visit by Biden to coincide with the 25th anniversary of the Good Friday agreement has been earmarked as the deadline for an agreement on the protocol with the European Commission.

At the start of their meeting, Biden told Truss: “We are both committed to protecting the Good Friday agreement of Northern Ireland. I’m looking forward to hearing what’s on your mind.”

The date will also serve as a deadline for the new devolved government in Northern Ireland to take office, having been delayed by the Democratic Unionist Party’s refusal to participate until its concerns related to the protocol are resolved.

Former Prime Minister Tony Blair, who brokered the 1998 Good Friday agreement, has also played an informal diplomatic role in recent weeks to persuade EU countries and the Biden administration that the UK has legitimate concerns over the trade implications of the protocol.

The new timetable suggests that Truss will take a far less confrontational approach towards post-Brexit relations with the EU than her predecessor Boris Johnson.

Earlier this week, the UK government told the EU it would continue delaying customs checks on goods moving from Great Britain to Northern Ireland in defiance of the protocol.

Talks between UK and EU officials about easing the implementation and terms of the protocol have been ongoing for over a year but have made little progress. The impasse has also led to the UK research community being shut out of the EU’s Horizon Europe programme and a series of legal disputes between London and Brussels.

As foreign secretary, in June, Truss tabled legislation designed to allow UK ministers to unilaterally override the protocol. The bill has majority support in the House of Commons but is now in the hands of the House of Lords though the UK parliament is in recess for the next three weeks because of the annual party conference season and the earliest it can be debated is in mid-October.

“I will not let this drift,” Truss told reporters in New York.