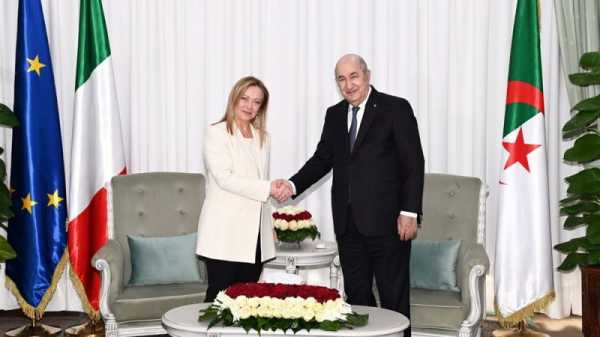 The Italian delegation, including Prime Minister Georgia Meloni and Eni CEO Claudio Descalzi, met with Algerian officials for a two-day state visit that began on Sunday.

To boost links between Italy and Algeria, Descalzi and Toufik Hakkar, General Manager at Sonatrach, a state-owned company that is one of the world’s leading oil companies and Africa’s largest joint-stock company, signed two agreements.

The second focuses on enhancing the energy interconnection network between the two to ensure a sustainable energy transition. This includes increasing the transport of energy to Italy and building a new gas pipeline that will also allow the transport of hydrogen. The two states also agreed to lay a new undersea power cable and increase production capacity for liquefied gas.

Meloni’s wish to transform Italy into a Mediterranean energy hub is realistic but faces obstacles that need to be overcome, Descalzi said on the sidelines of Meloni’s visit to the Mattei Garden in Algiers.

“The hub is made first of all of gas to be brought to Italy and in two or two and a half years we will be able to have the gas necessary for consumption. But energy security is also about infrastructure. We have potential pipelines and regasifiers, but they will arrive”, Descalzi said, as reported by Ansa.

Descalzi also underlined the structural limits of the south of Italy, where there is a ‘bottleneck’ that does not allow the transport of more than 126 million cubic metres of gas per day. “It is a great potential that is not being expressed”, he added.

Italy has several pipeline connections in Africa with Algeria, Libya, Egypt, Nigeria, Angola, Congo, and Mozambique, but also with northern Europe and Azerbaijan, which currently brings around eight billion cubic metres through the Trans Adriatic Pipeline (TAP), with supply expected to be expanded in a few years.

“From a potential point of view, already now we have managed to recover almost more than 50% of Russian gas and above all through Africa”, stressed Descalzi, who foresees Italy reducing gas supplies from Russia to zero from 2024, or 2025.

“You have to think that only two years ago Algeria was giving Italy about 21 billion, now it has given 25, we will reach 28 billion next year and then in 24-25 we will exceed that again. (Algeria) is really a strategic partner that is helping Italy a lot”, he concluded.