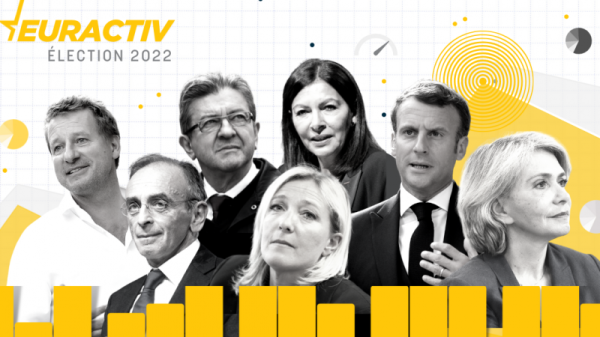 As tensions run high between the West and Russia over the situation along the Ukrainian border, EURACTIV France analyses the positions of April’s presidential election candidates on Moscow.

‘Not-yet candidate’ and current President Emmanuel Macron has been working for weeks to de-escalate tensions between Russia and Ukraine in close cooperation with his US and European partners.

The man who once described the NATO alliance as &#8220;brain dead” is now pleading for “targeted European sanctions”.

While some candidates in the French presidential elections share the head of state’s position, others advocate for a different approach.

Candidates of the radical left parties, Jean-Luc Mélenchon of La France Insoumise (LFI) and Fabien Roussel of the Communist Party (PCF), are the most explicit in advocating for France to adopt a policy of “non-alignment” and not side with Russia or NATO.

Mélenchon, who bemoaned Macron for having “raised his tone”, said he preferred “de-escalation”. The communist candidate said France should find “its voice” and stop siding “behind the American war policy”. He also called for a “firm but open” hand to be held out to Russia.

Socialist Party candidate Anne Hidalgo is calling for “heavy sanctions” to be imposed on Moscow to show that Europe “speaks with a firm voice”, while Green candidate Yannick Jadot is calling for sanctions against the assets of those “responsible”.

Political heavyweight Christiane Taubira favours a diplomatic route coordinated with European partners, though she believes it is too late to work towards peace.

Jadot also wants a real “European defence policy”, the lack of which would force France to only refer to NATO.

In today’s edition of the Capitals, find out more about former EU Commissioner Phil Hogan saying he will seek compensation from the EU, the Polish media board saying agreeing to grant public TV broadcaster another giant fund, and so much more.

The right calls for rapprochement

She suggests organising “a new conference on security in Europe which could give rise to a pan-European security council from the Atlantic to the Urals” because “we can do without the United States” although they are “inevitably partners”.

“A war with Ukraine would be a terrible mistake” on the part of Russia, she said, adding that NATO membership for Ukraine “is not on the agenda”.

The far-right, traditionally close to the Moscow regime, is united in wanting to broker peace with Russia.

Rassemblement National candidate Marine Le Pen (RN) and Reconquête candidate Éric Zemmour have explained that a de-escalation of tensions in the Russia-Ukraine crisis is only possible if it is officially acknowledged that “Ukraine will never join NATO” as per Putin’s request.

Zemmour is also proposing a “great European peace treaty”, for which he hopes Russia will respect Ukraine’s borders in return.

According to Le Pen, expanding NATO to Russia’s borders “creates a form of anxiety” for the country.

Nicolas Dupont-Aignan, the candidate of the less popular far-right party, Debout La France, has previously spoken in favour of a “grand alliance” between Europe and Russia. According to him, it is necessary to make Ukraine a “neutral state”, though Donbas’ autonomy needs to be recognised in return.

French presidential election: Where does Europe fit into all this?

France took over the rotating EU Council presidency on 1 January, just a few months before the first round of the French presidential elections where Emmanuel Macron will seek reelection against mostly right-wing challengers.