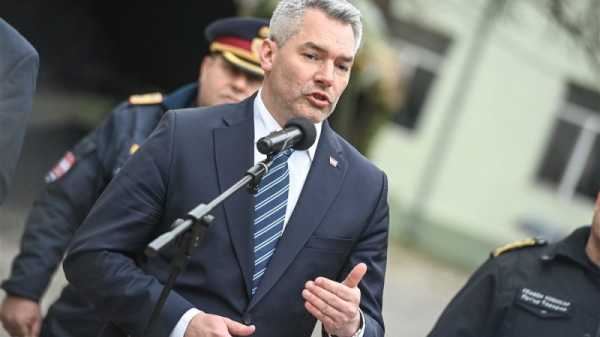 Bulgaria’s Schengen membership, like that of Romania, was blocked by Austria and the Netherlands in December, while Croatia entered the visa-free zone. Austria fears Bulgaria  would be unable to successfully control its borders with Turkey.

The alliance put forward by Nehammer will pressure the Commission to create the legal framework to provide additional money for border protection at the special EU summit in February that will focus on migration.

So far, the EU has refused to give money for the construction of border fences, but only financed infrastructure, a move that is heavily criticised by Austria.

“We want to support Bulgaria in protecting the border even more efficiently. Bulgaria cannot manage even more controls on its own,” Nehammer said during a state visit to Bulgaria on Monday. “Austria is needed here, but so are the other EU member states and the Commission above them,” Nehammer stressed.

Ahead of his travels to the Bulgarian-Turkish border, Nehammer emphasised that he will uphold Austria’s veto until “the situation changed fundamentally.”

In addition to the €2 billion for Bulgaria, Nehammer also called for changes in EU law and a new “non-refoulment directive” that would make the repatriation of migrants easier.

While expressing understanding for Nehammer’s position, Bulgarian President Rumen Radev stressed that the expulsion of his country from the borderless zone of the EU was “not fair”, and addressed Austrian journalists in German, saying “Bulgaria is doing its best”.

“The fact that there are problems in landlocked countries does not mean that Bulgaria and Romania, as foreign countries, also have these problems,” he said.

“I think it is not fair that we and Romania are outside Schengen because our economies also lose because of this, Austria also loses, because it is the biggest investor in Bulgaria,” said Radev, noting that “Schengen embodies one of the most important values of the union – freedom of movement.”

Radev also said that Bulgaria built the fence along the border with Turkey with its own efforts and handles security better than some Schengen countries, explaining to his Austrian counterpart that Erdogan committed to guarding the border on the Turkish side.

A few days after Austria and the Dutch blocked Bulgaria’s Schengen application, Radev commented that the country asked for guarantees from its EU partners that it will certainly become a member of Schengen in 2023, with a deadline of October.

“We are on our way to reach an exact deadline for Bulgaria’s entry into Schengen, which must be irreversible,” he said in Brussels at the time.