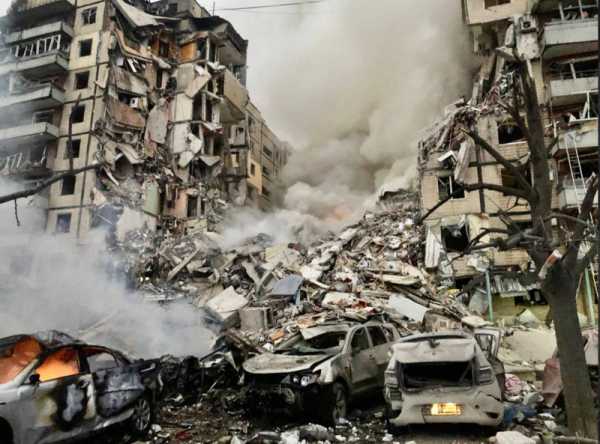 One year after Russia’s assault on Ukraine, diplomats have yet to translate bold promises to defend international law into a concrete plan to hold president Vladimir Putin and his cronies accountable for the crime of aggression. As a result, the 40 civilians buried in the rubble of an apartment block in Dnipro following a Russian missile attack are unlikely to be the last of this war’s victims.

The International Criminal Court (ICC) is probing war crimes and crimes against humanity in Ukraine but lacks jurisdiction over the crime of aggression there. Likewise, Russia’s veto effectively bars the UN Security Council from acting.

Ukraine itself is investigating atrocities, as are judicial authorities of some third countries, under the principle of universal jurisdiction. However, Putin and other top officials benefit from immunity before any domestic courts.

That leaves a new international court as the only option to investigate and prosecute Russia’s senior leaders for the crime of aggression against Ukraine. Ukraine has been working tirelessly to drum up support, already receiving backing for some form of a court from the European Union, France, The Netherlands, Poland, and the Baltic states.

Last week, Germany joined them. In a powerful speech in The Hague, foreign minister Annalena Baerbock argued for a special tribunal rooted in Ukrainian law. However, she acknowledged that Russia’s top three officials would still have immunity before such a tribunal.

To ensure that immunity does not shield Putin and his foreign and defence ministers from prosecution, an overwhelming majority vote in the UN General Assembly that specifically authorises the prosecution and trial of Russian leadership may be the only way to create a viable court for the crime of aggression.

Beyond legalities, such a vote would demonstrate the broad and diverse international support needed to withstand inevitable Russian attacks on its legitimacy.

But to win a General Assembly vote, Ukraine and its allies must confront two critical issues.

First, the widespread exasperation with double standards in international justice. Many states would welcome the creation of a new court for the crime of aggression so long as it sets a marker for future acts of aggression in the world.

In the Global South, where many already resent the impressive international attention and resources devoted to accountability for crimes in Ukraine, this condition may be the key to gaining support for a successful General Assembly resolution.

But this kind of thinking makes some policymakers in the United States, France, and the United Kingdom nervous. They are more likely to support a one-off effort for Ukraine to avoid a precedent that could constrain future foreign and security policies.

Ukraine’s most powerful friends should recognise that supporting international justice only in select countries, while ignoring or obstructing it in others, is no longer tenable. This approach has undermined the credibility of international law and courts across the Global South, whose governments are unlikely to assent in the General Assembly to any proposal for Ukraine that reeks of hypocrisy.

The second question is about the breadth of the court’s mandate. Some have been promoting the idea of a special tribunal focused only on Russia’s crime of aggression.

But many in Ukraine and beyond see the need for a court with a wider focus, to assist understandably overwhelmed Ukrainian prosecutors and judges not yet skilled at handling a torrent of complex war crimes and crimes against humanity cases. The ICC is investigating such cases but can only be expected to deal with a handful of them.

Ukraine can help its cause through two concessions. As Baerbock emphasised, it should fulfil its pledge to ratify the Rome Statute, the ICC’s founding treaty. This would create goodwill with states concerned about double standards, especially if Ukraine proceeded to advocate filling the loophole that prevents the ICC from prosecuting leaders from states, like Russia, who have refused to join it.

Ukraine should also look beyond the crime of aggression and consider a hybrid, Ukrainian-international court model that would also have jurisdiction over war crimes and crimes against humanity, in complement to the ICC.

This would help Ukraine handle its overwhelming caseload in the immediate term and build Ukrainian capacity for the long term.

Though authorised by the General Assembly, such a mechanism could be administered by another body with international credibility and the resources to do so, such as the European Union.

Ukraine and its partners will rightly push for a UN General Assembly vote before the February 24 anniversary of Russia’s full invasion.

To secure majority backing they should be mindful that there is little global appetite for proposals seen as privileging only parts of the world.

Rather, a court to address aggression in Ukraine must advance international justice as a whole. Their ability to compromise may determine whether Putin and future authors of aggression around the world ever face accountability for their actions.