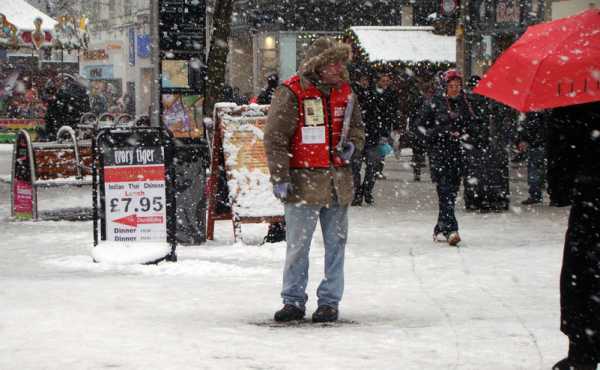 European citizens are cold, and cutting back on energy – but the balance sheets of fossil-fuel giants have spiked (Photo: Jon Candy)

This winter, times are tough for millions of Europeans. Three-in-four of us are cutting back on everyday items, including food. Protests are erupting as the energy and cost of living crises bite.

This summer, one-in-10 small and medium-sized business in Germany said their existence was under threat.

But there’s one quarter where things are looking suspiciously prosperous: the balance sheets of fossil-fuel giants. As fossil prices have spiked, their margins have grown.

Shell, TotalEnergies, Eni, and Repsol alone have recorded €77.9bn in profit up to September this year. At a time when consumer energy bills have sky-rocketed by double-digit percentages, it amounts to a major redistribution of wealth from citizens to corporations.

No politician should want to preside over this. To fix it, the EU needs to implement policies to protect citizens and reduce our reliance on fossil fuels — like implementing an effective windfall tax on oil and gas giants, caps on gas prices, new public investment in renewable energy and a massive roll-out of home-insulation for those already struggling.

But to do it, policy-makers need to overcome a major blocker: the oversized influence of the fossil fuel lobby on their decisions.

In this week’s EU Energy Council, leaders will consider whether to keep supporting energy bills beyond this winter. If gas prices remain high, those struggling to pay their bills should undoubtedly be supported, but the big question is who pays: indebted governments or the increasingly-rich fossil fuel industry? Under pressure from the gas lobby, it will be the next test of whose side decision-makers are really on: people or polluters?

But the real story behind this year’s skyrocketing fossil-fuel profits is fierce lobbying.

An investigation by Corporate Europe Observatory reveals that oil and gas lobbyists have enjoyed unprecedented access to European decision-making. As a result, a series of critical decisions on tax, energy infrastructure, and regulation have put fossil fuel industry profits above the interests of millions of people at risk of energy poverty in Europe.

Since February, the month Russia invaded Ukraine, there were more than 100 meetings between the fossil fuel industry and European Commission leaders — equivalent to one every other day. Commission President Von der Leyen met several times with oil and gas CEOs while formulating the bloc’s energy response to the Ukraine crisis. Predictably, she was warned against “fiddling” with the market and price caps, and advised on which measures were “feasible”.

The EU’s new Energy Platform Industry Advisory Group is tasked with getting the continent off Russian gas and is exclusively made up of virtually every significant oil and gas corporation in Europe, as well as their trade associations.

There is not a single public interest voice in the group: no organisations representing those in energy poverty, nor workers, nor climate or biodiversity. Meeting minutes make it clear that the gas lobby came up with this idea — CEOs pitched the advisory group under the banner of “offering assistance”.

The results of this outsized influence have been catastrophic.

First, it’s worsened Europe’s reliance on gas. Fossil fuel lobbyists have successfully pushed for massive public support for new gas imports and new infrastructure, including a proposal for 300 new gas projects over the next ten years. This will keep us reliant on the erratic fossil fuel market: pushing up profits as well as people’s energy bills. If the EU walks the walk and moves away from fossil fuels, this will also lock billions of euros into useless infrastructure while diverting investment away from renewable energy.

Second, it’s delayed action to reform energy markets. Weakening measures like ambitious windfall taxes or price caps have allowed fossil giants to boost their profits and avoid footing the bill for an energy crisis of their own making. The EU’s so-called ‘solidarity contribution’ on oil and gas firms looks increasingly like a symbolic measure. Expected revenues won’t even cover the €29bn oil companies benefit from in the form of fuel duty cuts.

If the EU listened to energy poverty groups, trade unions, consumer watchdogs or climate NGOs rather than oil and gas lobbyists, we wouldn’t be in this mess. It’s why we need fossil-free politics.

Without it EU decision-makers will only worsen the energy and cost of living crisis. Bills will rise, the just transition will get harder, a tiny elite will get richer — and let’s not kid ourselves, people across Europe have already worked out who’s to blame: the fossil fuel industry and the decision-makers they’re in bed with.